The other day after leaving the office for lunch, I noticed a crowd of people standing near to the road and not moving. Being the kaypoh that I am, obviously I couldn’t stop myself from looking to see what on earth they were looking at.

As I got nearer, I could smell something nasty in the air. Smelt like plastic burning. To my horror delight, I saw a yellow car with the back portion all burnt up! It was still smoking and the smell was so bad, after a few more glances with my breath held, I quickly left.

I returned one hour later, and the crowd had pretty much dispersed except for new onlookers every few minutes or so. As you can see from the pictures below, which I took at 1.30pm after lunch, the car was no longer smoking so I took a closer look. Now I am not one who is crazy over cars, so I had no idea that this was a ferrari which had just gone up in smoke. Still, from the yellow colour, plus the fact it didn’t have a roof, I guessed that it must not be that ordinary a car.

This must be quite bad for Ferrari’s image. According to the newspapers, the car simply spontaneously burst into flames. This must be a huge safety issue, which requires as much prominence as the Toyota and Honda problems! Would I hesitate to drive a Ferrari from now on if my godfather presents me with one? Hell no!

It was the talk of the town back in the office. A few people were lamenting the fact that the owner (the newspaper said it was a young man) would be heartbroken if their expensive car was destroyed in such a horrible manner. Nah….I think we can all sleep well knowing that his father would probably have it replaced ASAP. Or maybe Ferrari would give them a brand new one for free as a sign of goodwill. 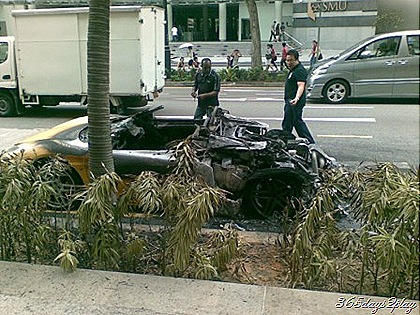 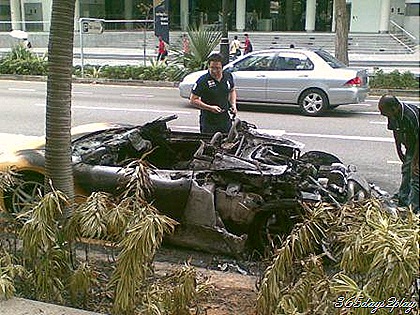 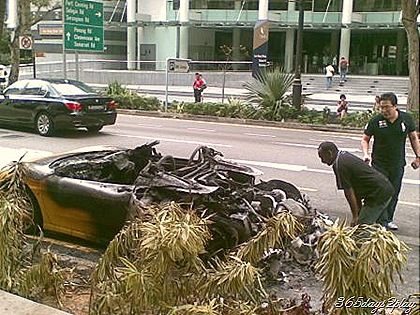