I can’t seem to escape from the allure of Marina Bay Sands, so when I heard about the new cafe South Coast that had opened there, I just knew I had to pay them a visit. Also happened to read about these cane toad pies they claim to be serving…

We had a bit of trouble locating South Coast, as you actually have to step out of MBS to find it. Most people choose to sit outside as it is brighter and you get the views of the water, but we wanted to escape the sun and also the construction site smell just outside.. It is air conditioned inside, even though all their doors are open! 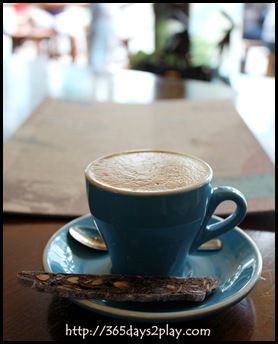 Flat White $5 – The coffee was pretty good, nice aroma and body. It also came with a biscotti but I forgot to eat it! My father ate his and he said it was wonderful. Damn! 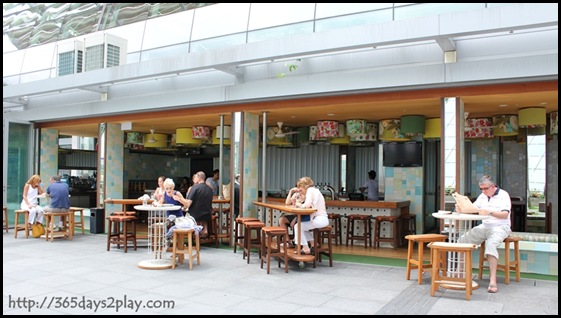 See, everyone chose to sit outside. 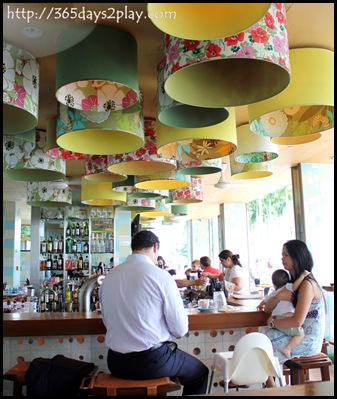 I like the circular lamp shade thingies on the ceiling! Don’t you think they look quite pretty? Kind of matches the floral dress the lady with the kid was wearing. Some of the lamp shades don’t have light bulbs in them. Guess which. 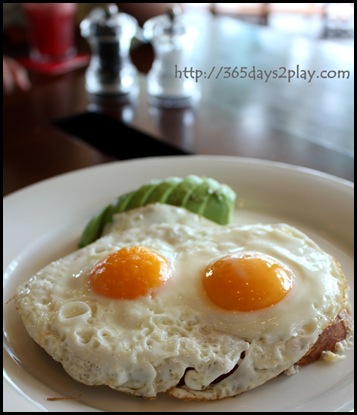 Avocado, sunny side up eggs, melted cheese on sourdough toast $16 — My father ordered this and said that it was fantastic. You can just see the bread sticking out from under the eggs. It has a load of crusty cheese on it which paired very well with the runny eggs and avocados. 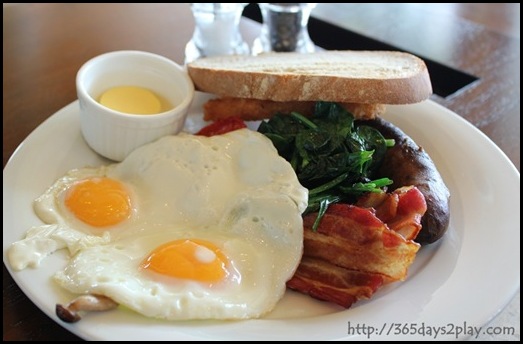 Barn laid eggs, bacon, mushrooms, sausage, spinach, hash brown, tomato with sour dough toast $21 — Plating doesn’t seem to be the chef’s best skill. Or maybe the plate was too small as my toast kept slipping onto the table. Can’t see the mushrooms in this photo except for the odd one sticking out under the eggs. On the whole, pretty good. The hash brown has got to be the best that I’ve eaten in a while! Eggs are of course something I never tire off. Mushrooms, spinach and bacon were good. The bacon still had texture as it hadn’t been over fried to a crisp. The sausage was rather bland though. I could do without the sausage and have a cheaper meal. Bread also tasted normal, couldn’t tell that it was sourdough. 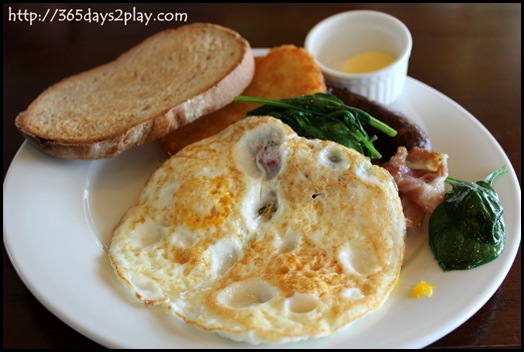 The same breakfast as the picture above, except that the eggs were done over easy instead of sunny side up. 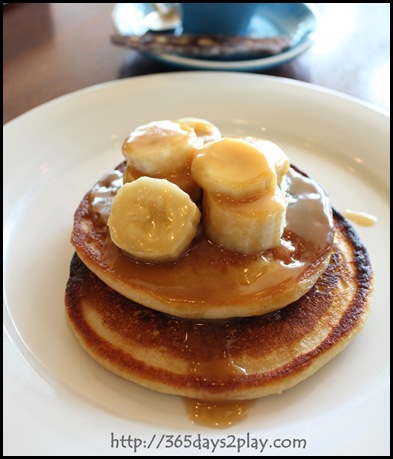 Ricotta pancakes with caramelized bananas $14 — In my opinion, the STAR of the entire meal at South Coast. These pancakes were SOOOOO GOOOOOOOD. So so good. I am planning a return visit just to have these pancakes again! I didn’t eat the bananas but I mopped up the caramel with the pancakes. The flavour was awesome and the texture of the pancakes was light and fluffy without being flat! I’ve been wanting to replicate pancakes like these and never been successful! It’s a pity they don’t serve this at night. It would be great on the dessert menu! 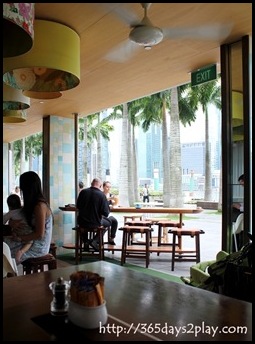 We got the waitress to turn down the fans as they were blasting at our food. View from the inside is pretty good too.

Cute little chairs. They have chairs with backs as well but that’s only available outside. 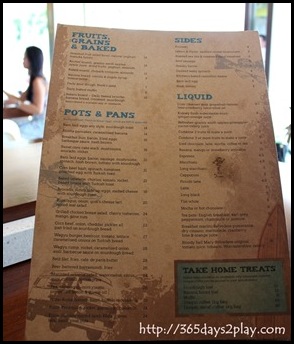 On the whole, I thought the food was good but a little pricey. $16 for cheese and eggs on toast plus half an avocado, that’s steep to me. As I’ve mentioned time and again, I make my comparison with Epicurious at Robertson Quay. Of course, the prices are steeper here due to the location, and also, you don’t have to wait too long for the food, which is very important. Don’t bother asking for variations in your meal though. The chef at South Coast doesn’t entertain that.