The Partner kindly agreed to produce the text for Strasbourg, after all, this being his honeymoon as well. I’ve added my own inputs, but you can tell when the paragraph exudes the Partner’s vibes, it’s where all the heavy history stuff appears….

Strasbourg is a lovely little city. We only had the afternoon to spend in Strasbourg after checking into our hotel, the Chí¢teau de l’Ile, so we had to zoom to all the major tourist attractions in town. Did I mention that I love travelling in Spring? It only got dark around 9pm, so when I say afternoon, I really mean afternoon and evening, in the Singapore context.

What to do in Strasbourg? Apart from Strasbourg being a pretty city at a comfortable size that doesn’t feel overwhelming, one good reason to visit Strasbourg is because Strasbourg is the seat of several European institutions, such as the Council of Europe (with its European Court of Human Rights, its European Directorate for the Quality of Medicines and its European Audiovisual Observatory) and the Eurocorps, as well as the European Parliament and the European Ombudsman of the European Union. It sure sounds good to tell people you’ve been to such a powerful city. 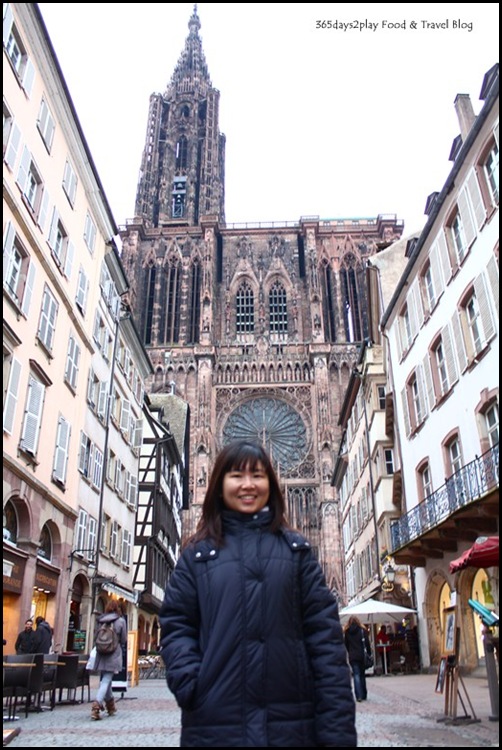 If there’s nothing else that you see in Strasbourg, you must at least visit the Strasbourg Cathedral. The iconic Strasbourg Cathedral took nearly 300 years to complete, but once finished in 1439, it replaced the Great Pyramid of Giza to become the TALLEST BUILDING IN THE WORLD at that time! It makes my hair stand to think of it even as I am typing this. I feel a sense of wonderment how a building of such great history can coexist with modern economic interests such as the European Union offices. 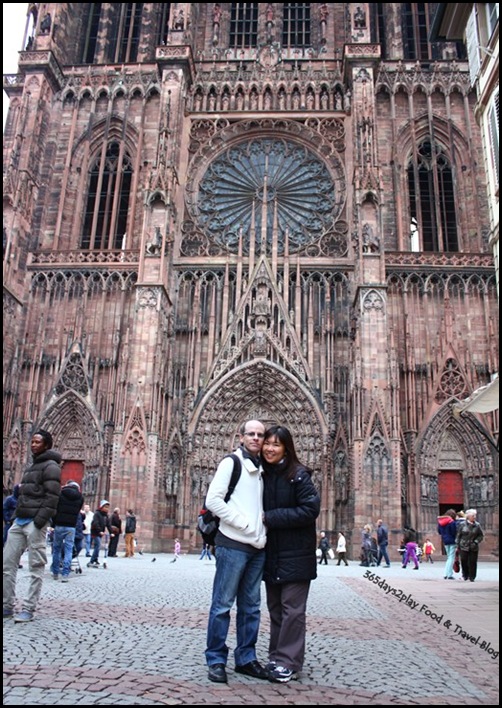 It’s times like these that I wonder what it would be like not to live in Singapore, which has such a short history of only 48 years of independence (about 200 years if you include our founding years), and despite our short history, we have already razed away a significant number of buildings that our parents would have been familiar with in their childhood. 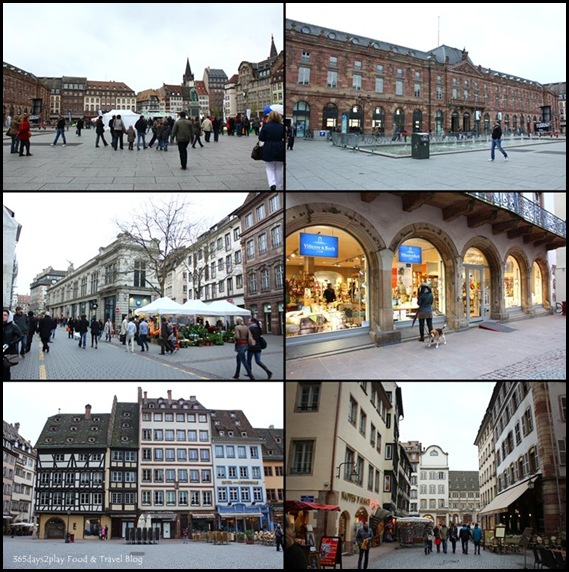 If I were to plop you into the middle of Strasbourg, you would certainly think that you are in Germany. Everything looks German, sounds German and the food is German, but the city is in France!

Why? Because for most of its post Roman history Strasbourg was a German town, (from the year 842 to 1681). France annexed it in 1681 and tried to make it more French looking. In 1871 the Germans took it back and made it more German looking again. At the end of World War 1 it was back in French hands where it remains today. The city is the capital and principal city of the Alsace region in eastern France. 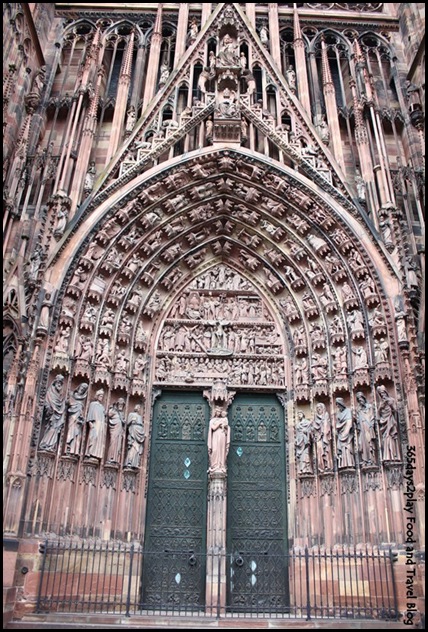 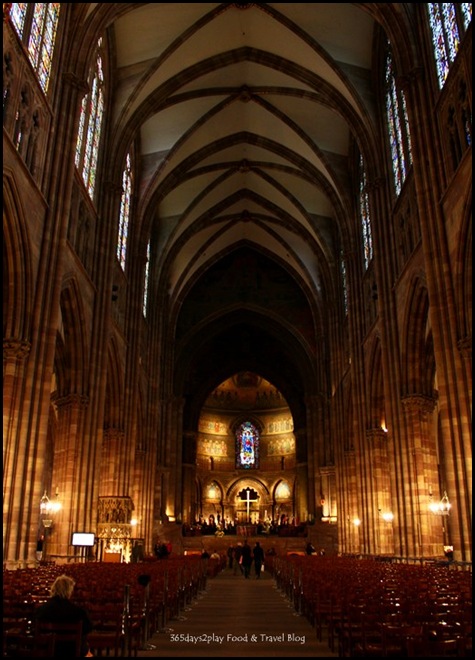 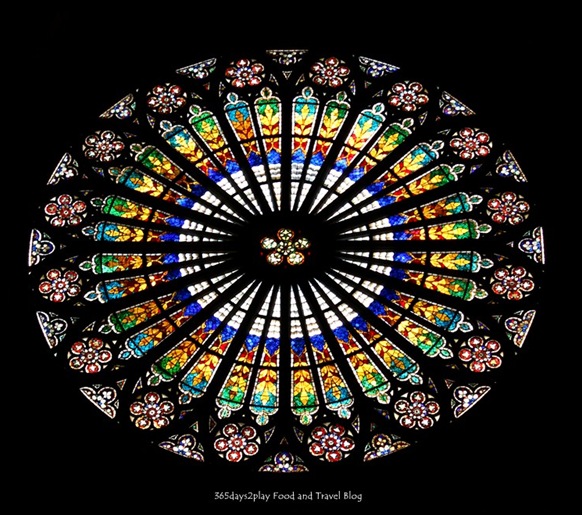 More pictures of the interior of the Strasbourg Cathedral. 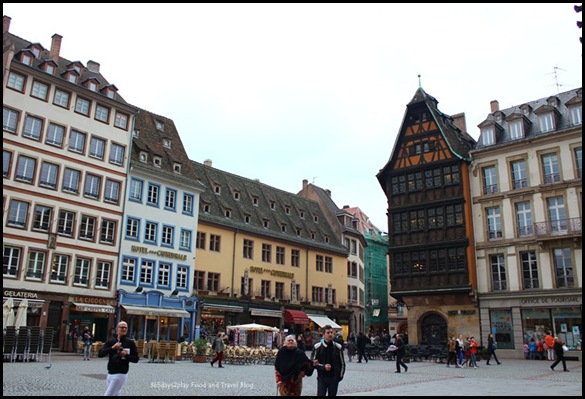 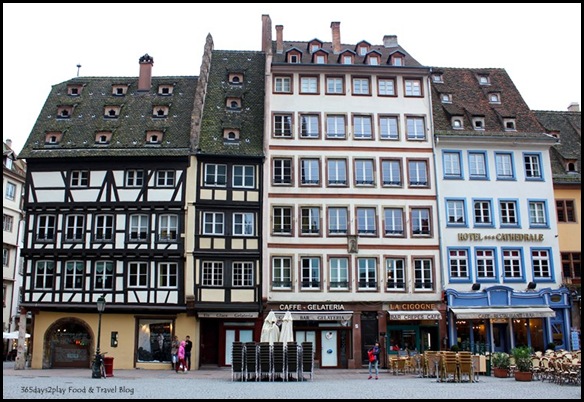 Because of its long Germanic history the city is chiefly known for its medieval cityscape of Rhineland black and white timber-framed buildings, particularly in the Petite-France district or Gerberviertel ("tanners’ district"). 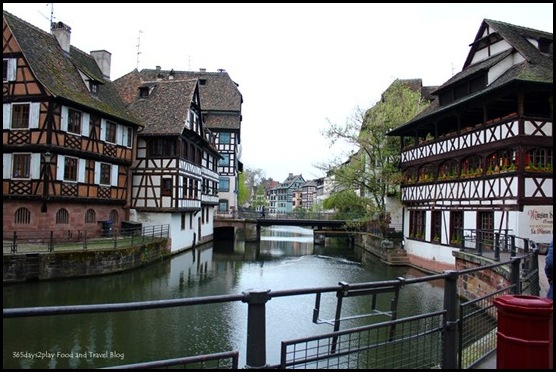 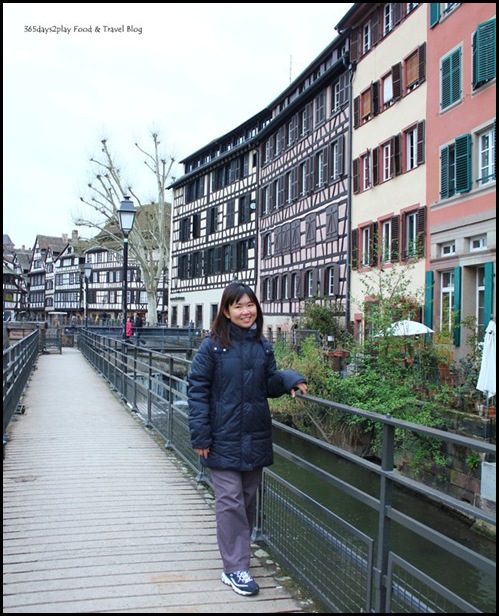 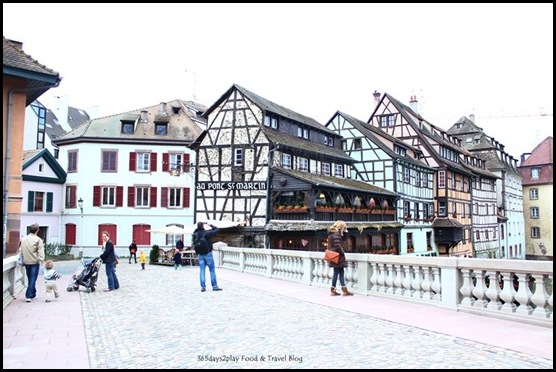 The Petite France area where you can find many restaurants and shops selling gingerbread as well as nougat. The nougat shop we went to was chock full of gigantic nougat slabs. 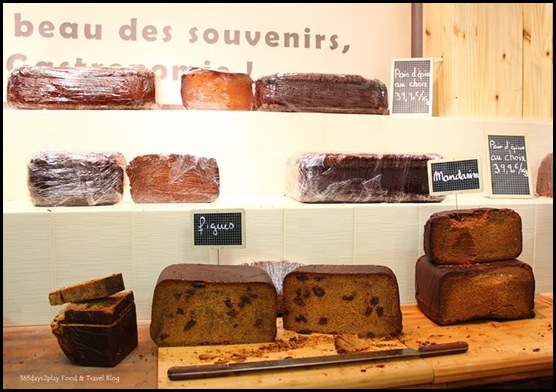 Can you guess what on earth this is? It’s gingerbread!!! Good for souvenirs, says so on the wall… 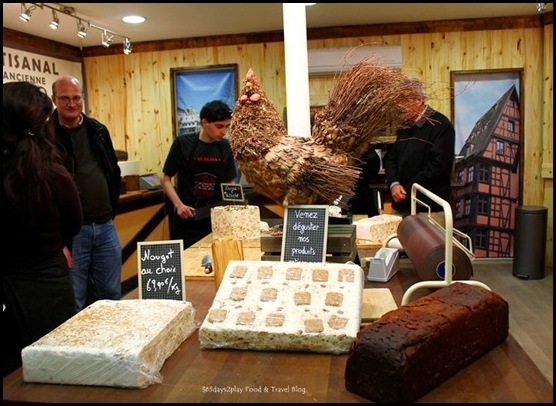 Sign says you are welcome to come forward to try! We didn’t want to at first because we weren’t keen on buying too many sweet stuff, but the people are very friendly and won’t bug you to buy so we tried some in the end. They are the chewy and slightly soft kind, unlike the Golden Boronia of Australia that is still my favourite to date. 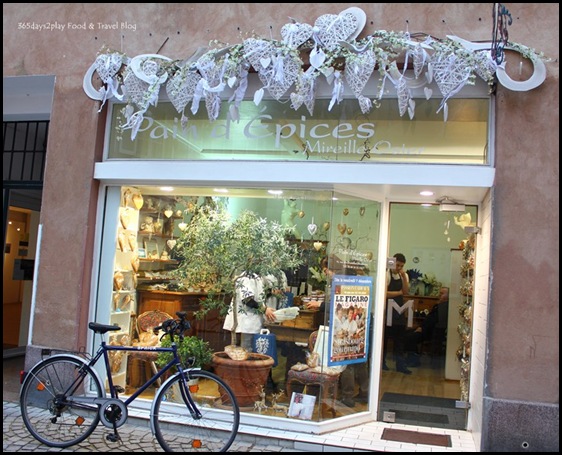 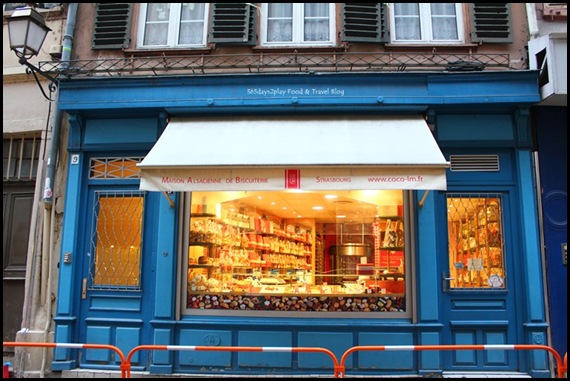 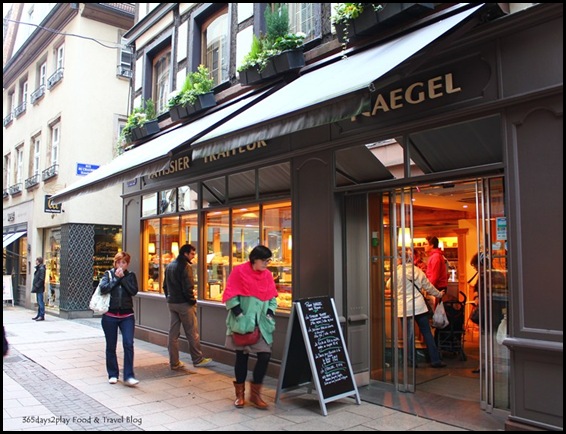 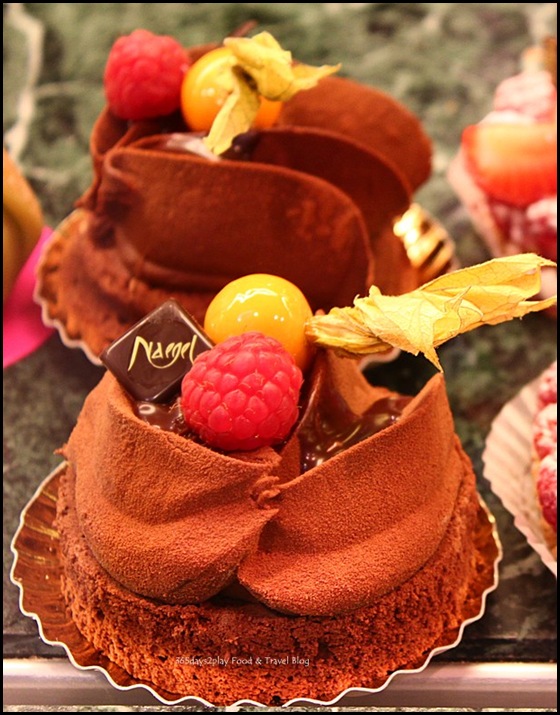 Had to take a picture at the Patisserie of course…. 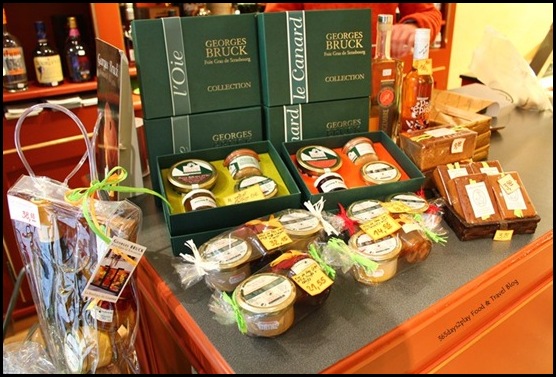 Strasbourg is the capital of the Alsace region, and did you know, Strasbourg is the capital of Foie Gras too? It was where Foie Gras was invented in the 1780s. You will be able to fine Foie Gras very easily in the Alsace region. Even souvenir shops stock a few, and price them similar to if you were to get them from the actual store. From tubs to tins to glass bottles, they were all calling out my name. In the end I succumbed and bought 2 foie gras, one duck foie gras (canard) and one goose foie gras (oie). 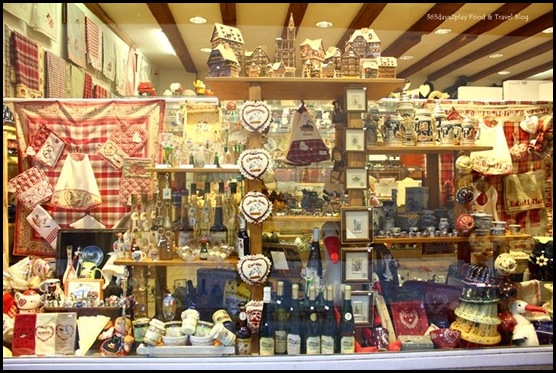 Speaking of souvenirs, I thought the Alsace region souvenirs were the prettiest and most iconic. I mean Paris, it’s Eiffel Tower souvenirs in all size and form. But everyone knows about the Eiffel Tower already. But Alsace, there’s so much more variety, and in lovely colours! I don’t know why but in Alsace, you can find the souvenir shops laden with Alsatian design clothes, kitchen mittens, table cloths… I bought a table cloth myself. 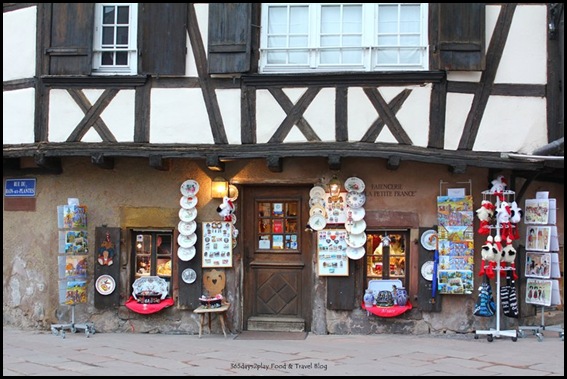 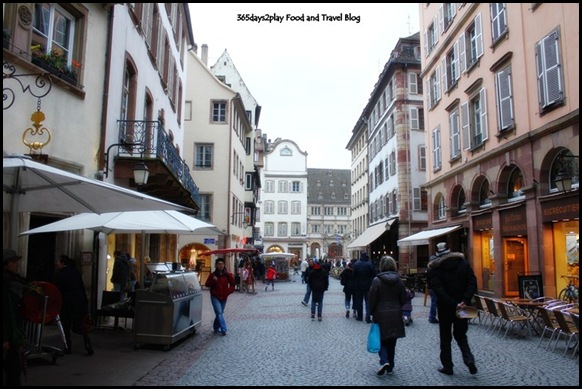 It was in Strasbourg that Johannes Gutenberg created the first European moveable type printing press. Without whom, we may not have had the printing revolution that lead to books, then to computing and ultimately lead to this blog! Thanks Johannes. 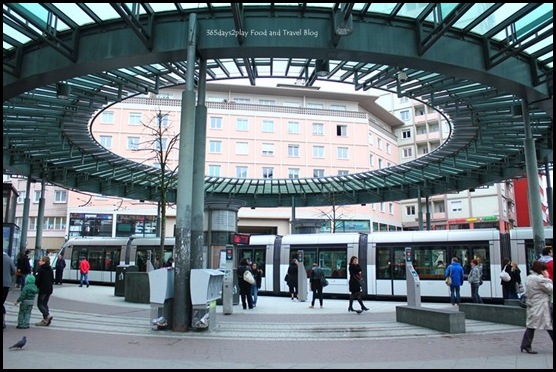 Check out the Strasbourg tram station. Barrierless! Talk about true connectivity. Out of the shops and into the trams in the span of a few hops!

That’s it for Strasbourg, France. What to do in Strasbourg, now you know. I stayed at Chí¢teau de l’Ile, which is about 1/2 hour by tram from Strasbourg main city stop.