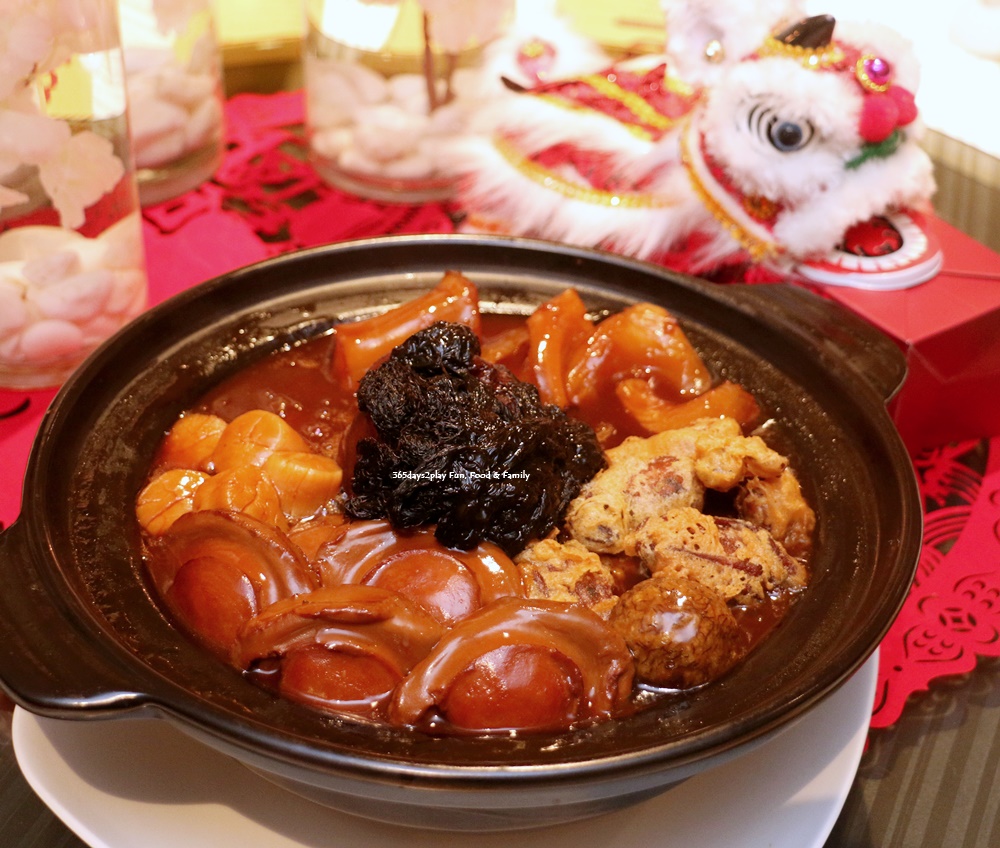 It can be hard to decide on the the best hotel venue or restaurant to have your Chinese New Year reunion dinner, especially when all of these F&B establishments are pulling out all the stops to get your attention and they all end up looking very similar. After tasting quite a number of Chinese New Year menus, I am glad to report that Wan Hao Restaurant from Singapore Marriott Tang Plaza Hotel at Orchard Road offers up one of the best CNY menus this year. Scroll down to see some of the highlights from the Marriott buffet as well as ala-carte and set menus.

In particular, two dishes incorporating almond had me in awe and finishing up every last drop, when for decades I have avoided any Chinese dishes with almond stock/milk/cream under the assumption that I did not like it. More on that if you scroll down further. 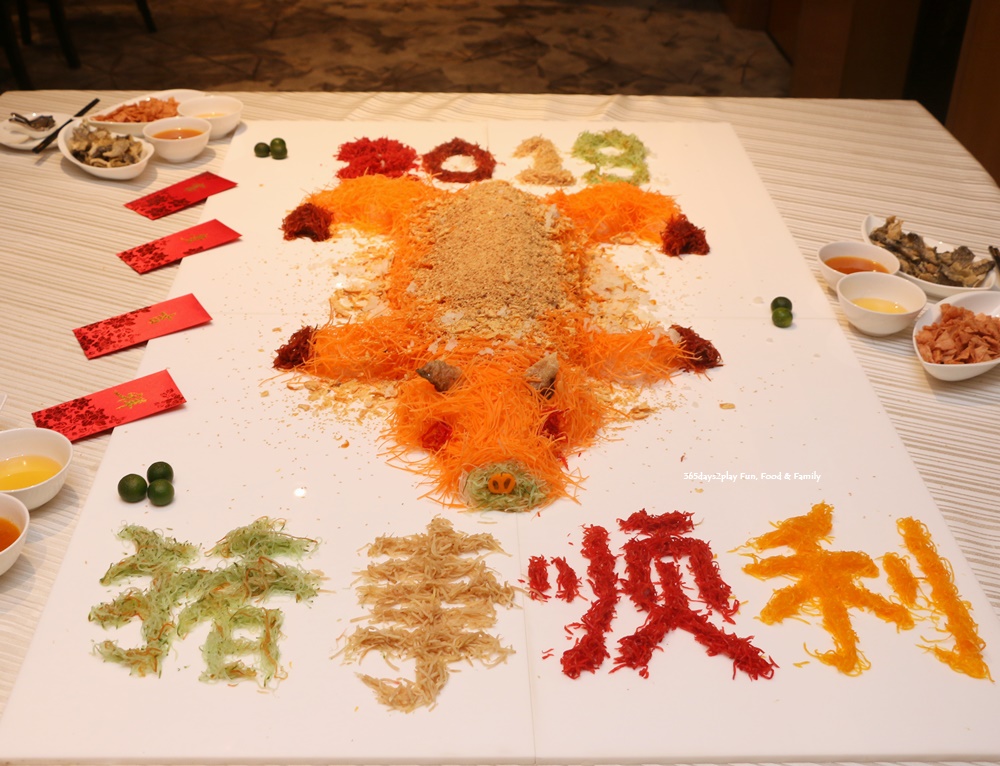 Featuring lobster, sea urchin, hokkaido scallop, tuna, salmon, caviar and crispy fish skin, this $256++ yusheng has enough of the expensive bits to keep everyone happy. Despite the vigorous tossing, I even managed to discover a whole piece of sea urchin in my yusheng portion. Huat ah!

Cheaper versions of yusheng including a smoked duck breast and crispy fish skin (if you don’t want any raw food), as well as a vegetarian version are also available. 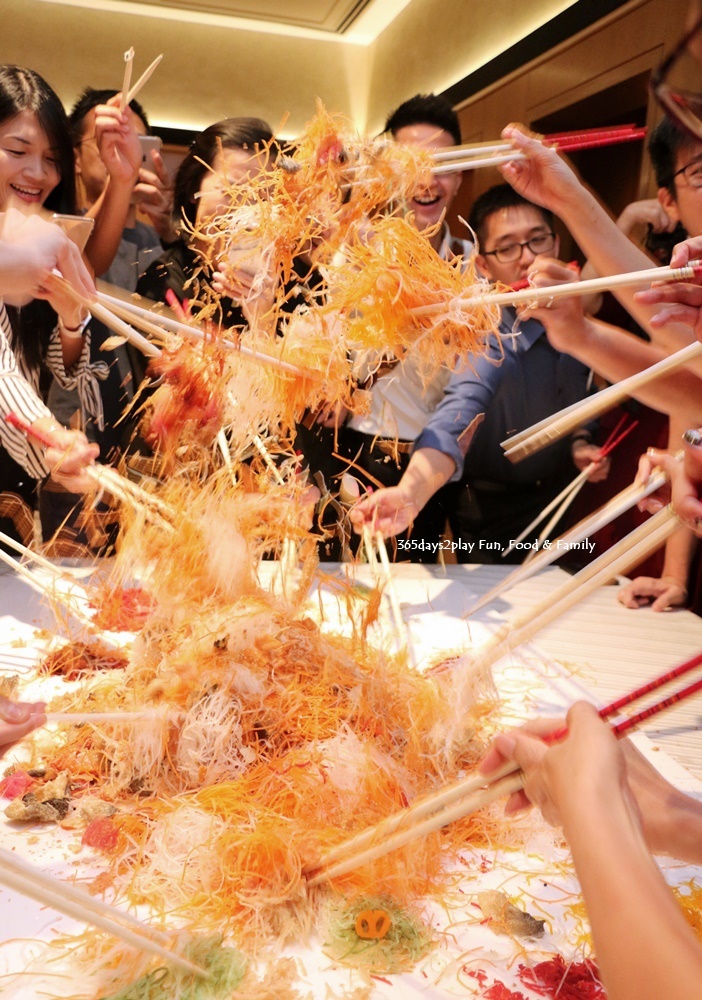 Toss it as high as you can! 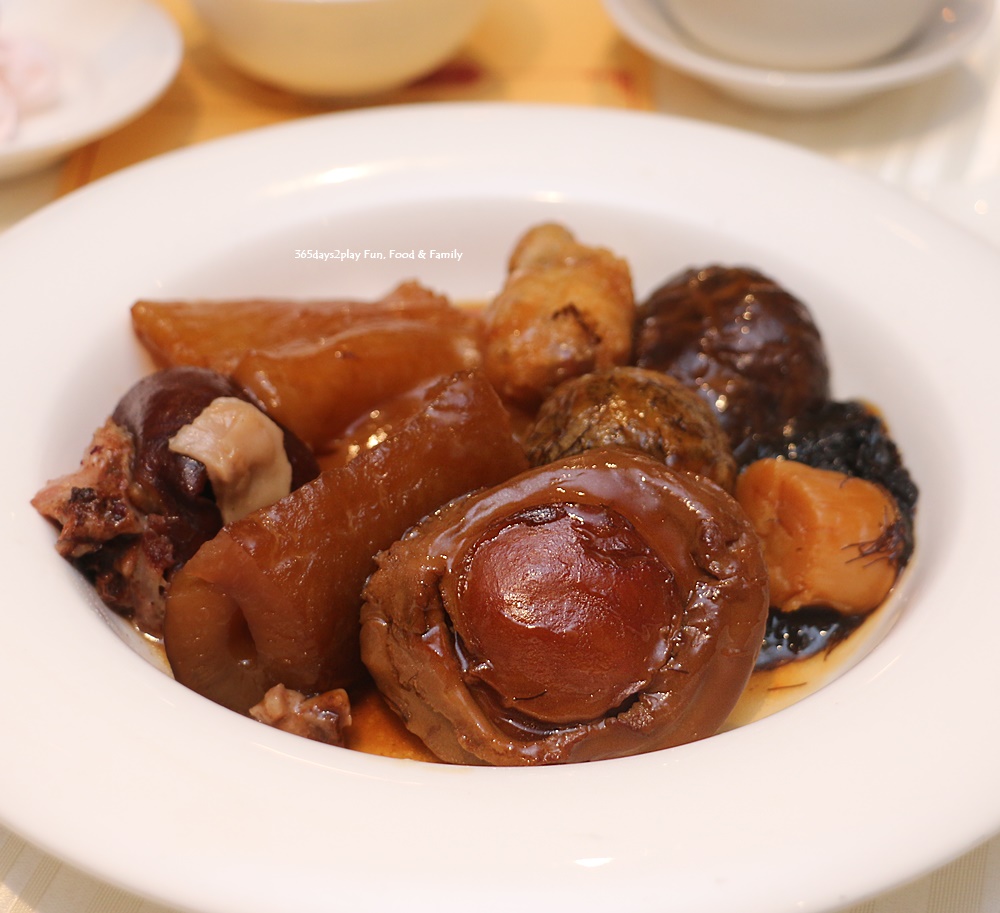 I have to say this is probably the best Pen Cai I have ever eaten. When it comes to Pen Cai, it sometimes feels like if you’ve seen one, you’ve seen them all because it seems to be a race to see who can stuff the pot with more expensive ingredients. But what sets this Pen Cai apart is the amazingly flavourful broth. The first thing I happened to eat was the humble black moss (which by itself is rather tasteless), and together with the savoury broth, tasted like the most refined version of mee sua ever, simply pure bliss. And if you did think the abalone looks huge in the picture, well it is huge. 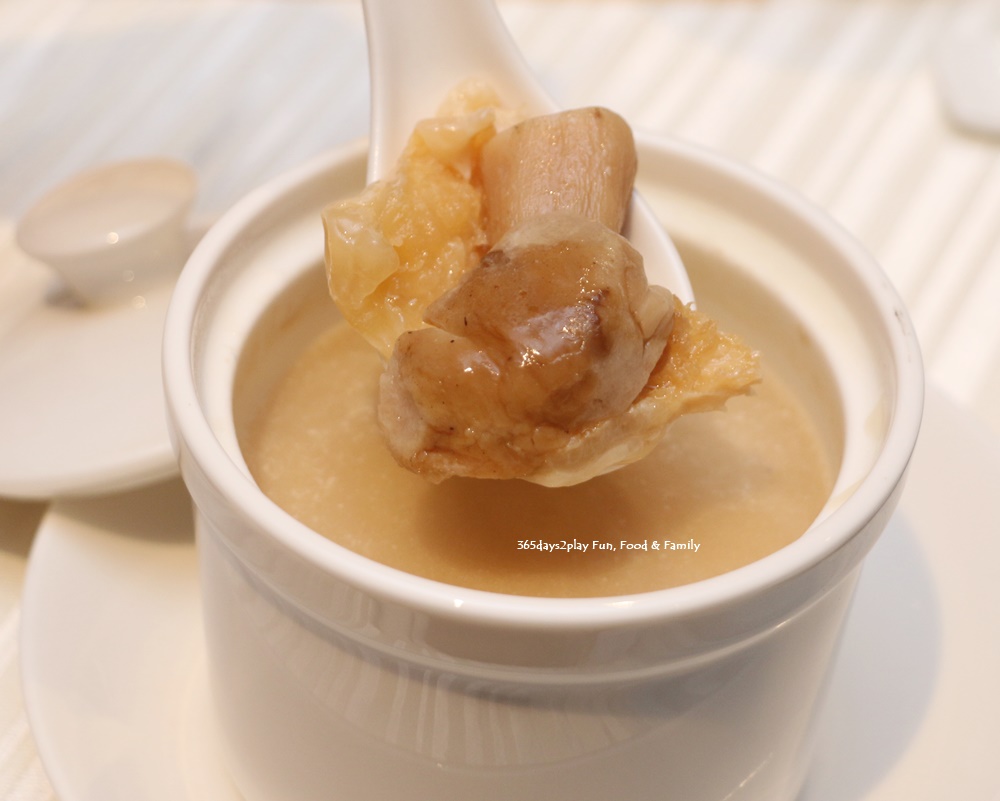 When it comes to Chinese desserts, for decades I have been avoiding anything that has been made with almond because there is this very medicinal and fake taste to it. I have never understood it and I always wondered why people could tolerate this taste. That is until I had this almond soup. I’ve never come across almond used in a savoury soup like this before, usually it makes its appearance in desserts, so this itself is noteworthy already. But the most amazing thing is that instead of the medicinal taste I was bracing myself for, I tasted gentle notes of fragrant almond essence, nothing too in your face, but a melodious background instead. This fish maw soup was absolutely delectable and I finished every last drop. 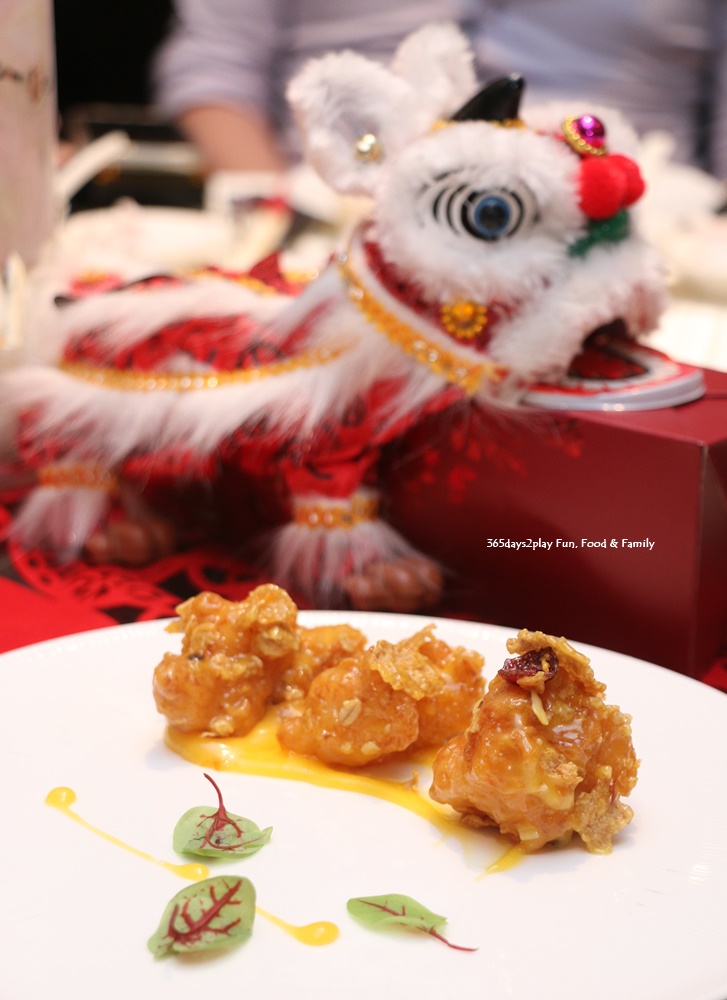 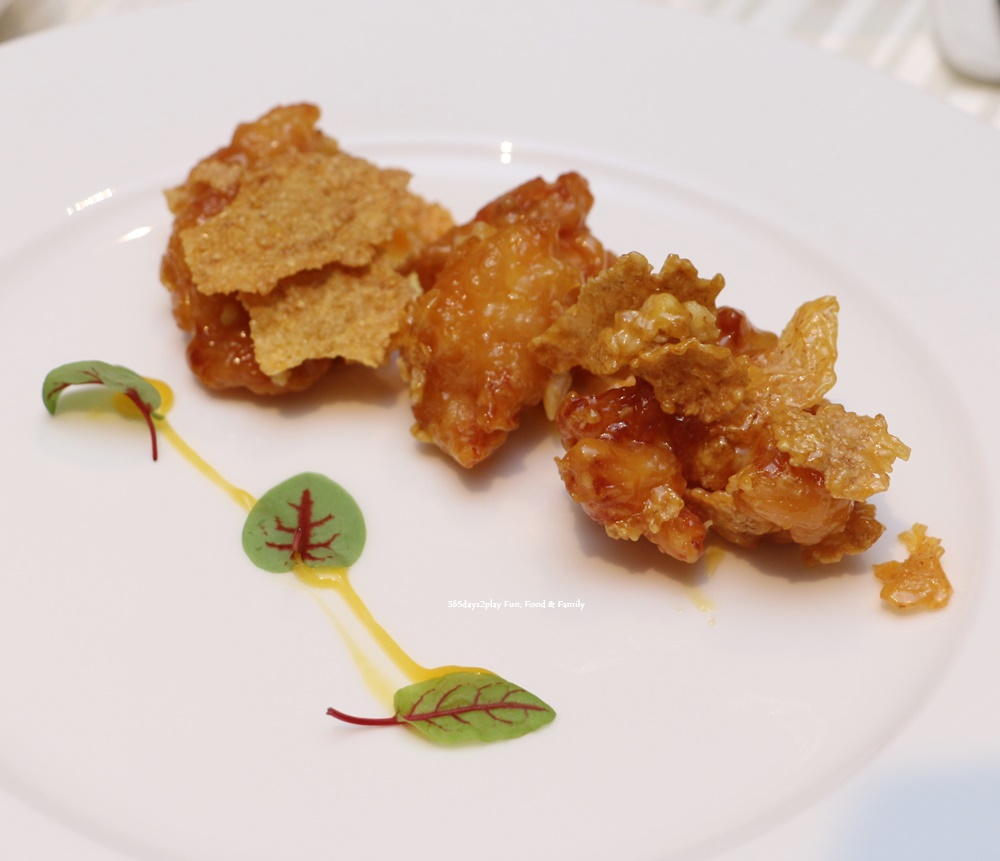 Loved the fried lobster but don’t think the cereal worked. Would have been better if a crisp cereal was used, but this one was thicker than usual and a little hard. Also, a bit too much passion fruit mayonnaise, which can’t be swept off because the lobster pieces had been rolled in it. 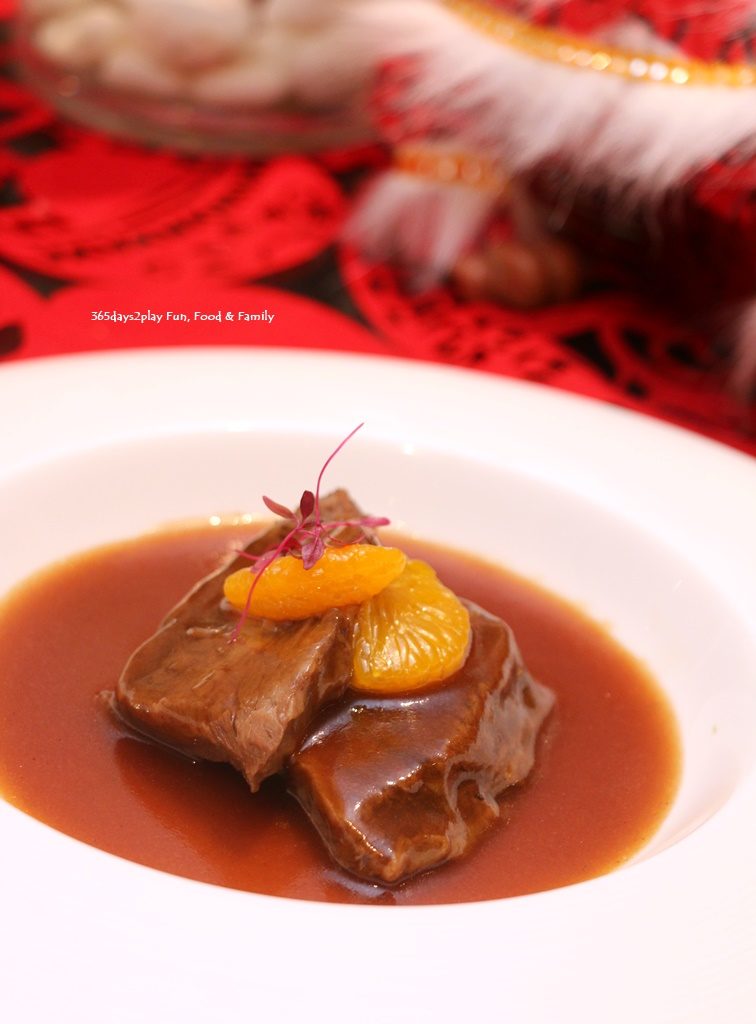 Fork tender beef ribs. A very nice version with a nice CNY element to it. 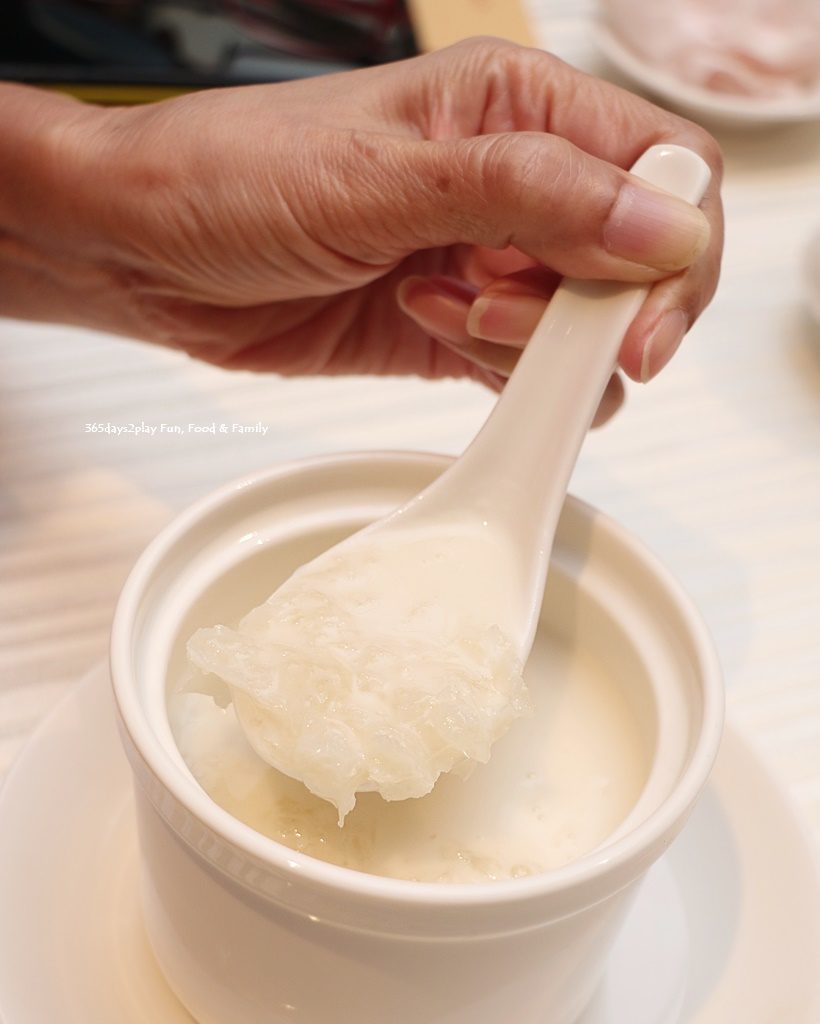 Once again, I was bracing myself for the pungent medicinal taste, given that this entire bowl would be essentially almond cream (as opposed to the almond stock, with many other ingredients competing for space as well), but once again, pleasantly surprised to find that I really enjoyed this dessert. I don’t know why the cheap almond desserts sold at desserts stalls are so vastly different from this? The chef at Wan Hao will probably attribute this to quality of ingredients and attention to preparation! But suffice to say that this meal has forever altered my perception of almond based Chinese desserts! 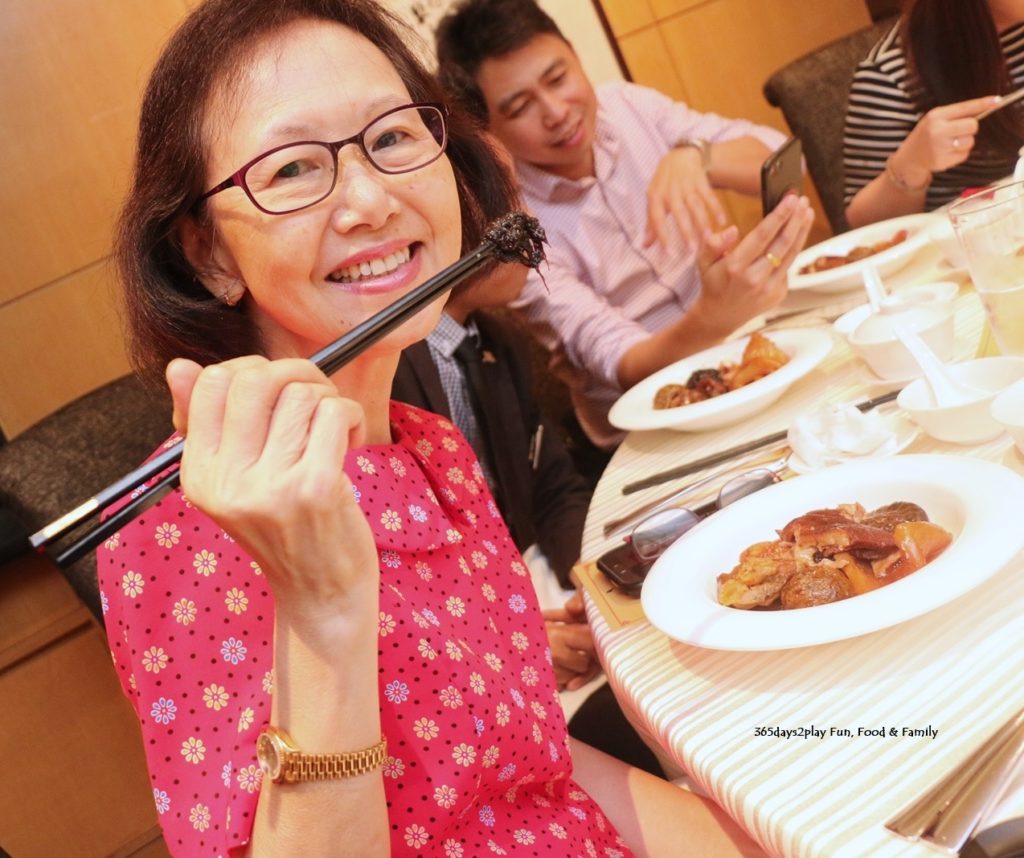 Here’s a picture of my mother enjoying the black moss in the pen cai dish! If you have a chance to influence where your boss takes you for the company’s CNY celebration, I think you will find that Wan Hao’s CNY offerings this year won’t disappoint!

SET MENUS OF PROSPERITY AND FORTUNE 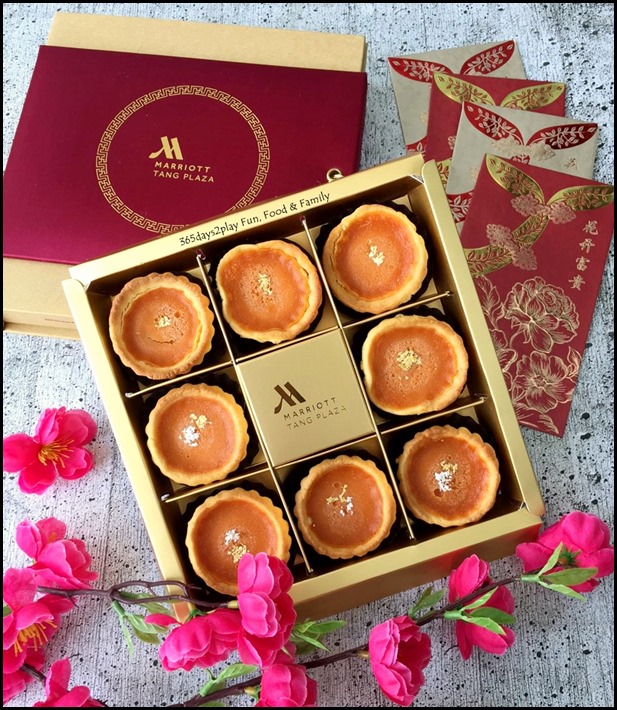 As with any Chinese New Year celebration, CNY goodies are a must. Featured above is the Golden Nian Gao Tarts, a variation from the usual sliced nian gao that we usually see in the market. 3 flavours to choose from: Green Tea, Cempedak and Yam. $30-$32 / 8 pieces.

For dining reservations or pre-order of Takeaway Goodies, please call 6831 4605 or email mhrs.sindt.fb.reservations@marriotthotels.com

And just in case you don’t really want to do the whole Chinese New Year visiting thing, you may want to consider Marriott’s Staycation promo. Rates starting from $340++ per room, per night Includes:- Complimentary breakfast buffet for two at Marriott Cafe ï‚·
$50 Food & Beverage credit

Promotional code: YX1
Book from now until 10 February 2019 at www.marriott.com/sindt