I had KFC rice porridge today for lunch. No, the porridge was not bought from KFC. My enterprising grandmother took our left over KFC chicken pieces (the ones we hadn’t eaten) and simmered them together with some rice grains and water to make the porridge! I know, the idea sounds terrible. Overfried chicken pieces with the crispy flour batter and skin still on, floating around in the soupy porridge. Kentucky Fried Chicken porridge, what was she thinking?!?! But let me tell you, it tastes great!!!!

You know KFC chicken is so oily and decadent, you can’t really gorge on it because you get sick of it quite quickly. However, with the porridge water diluting the oiliness, the porridge retains the flavour of the 11 secret spices without giving you the sickly feeling.

I just had 2 bowls of the porridge and there’s still half a pot left, made with just 1 chicken thigh and 1 chicken drumstick. Try it! 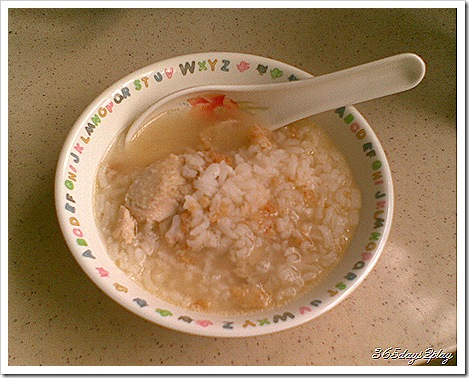