Although I hated studying History in school, I am thankful that I still retain my fascination with antiquity and how people of the yesteryears lived. There is no doubt that a visit to a museum would be one of the highlights in any overseas trip that I make. I’m sure a lot of people share the same interest with me, especially when it comes to Egyptian history. Mummies, pyramids, Pharoahs, these are words that the average person would definitely recognise.

For me, I have a particular soft spot for Egyptian history simply because more than 10 years ago, the Egyptian exhibition at the then Asian Civilizations Museum (Armenian Street) was where my thirst for such knowledge first sprung forth. It was all thanks to the most interesting and animated docent we had for the tour through the exhibits. I subsequently did a volunteer stint at the museum as well!

The Mummies are back again, this time at the ArtScience Museum at Marina Bay Sands. Mummy : Secrets of the Tomb is an exhibition pairing mummies and artifacts culled from the extensive and famed Egyptian collection of the British Museum. The centrepiece is Nesperennub, a temple priest who lived 3000 years ago and died at the age of 40. You will be able to see a cast of his head to see how he looked like those 3000 years ago! The most amazing part of it all is that the Nesperennub remains in his original cartonnage coffin that has never been opened! The groundbreaking 3D film captures the ”virtual unwrapping” of Nesperennub and I can tell you that it is an incredible film (and not some crap thing they throw in just to charge you a more expensive ticket). 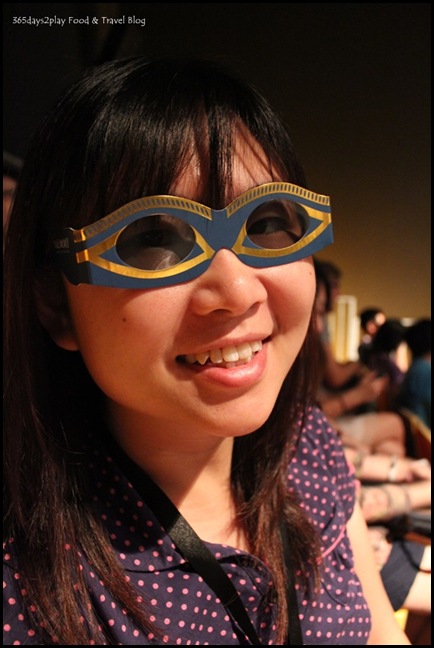 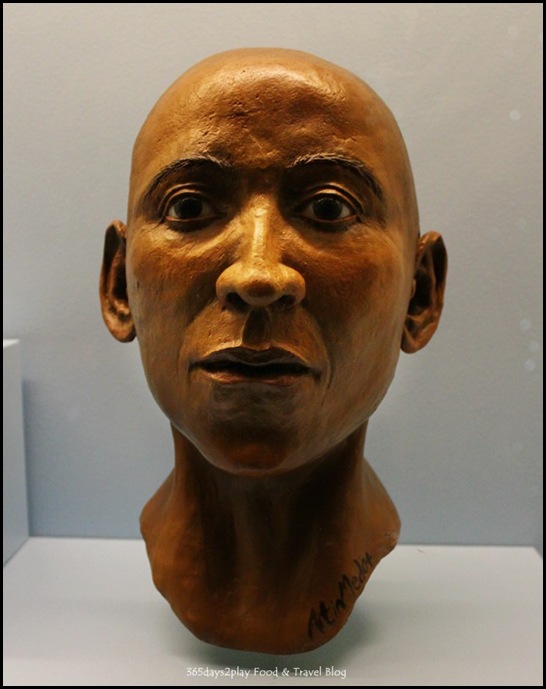 This the digital reconstruction of how Nesperennub would have looked like when he was alive. With the most advanced and cutting-edge scanning technology used in modern medicine, it is now possible to ”unwrap” an Egyptian mummy without actually disturbing the delicate mummy wrappings or destroying delicate historical data.

My first impression of Nesperennub is that he has an ”ancient times” look. But after looking at this picture a couple of times now, I am starting to think that his face would not really stand out in a multi-cultural place such as Singapore. Is it just me or do you often have the same thought when you are looking at pictures/portraits of people who lived hundreds of years ago and you feel like no modern person would look like that? 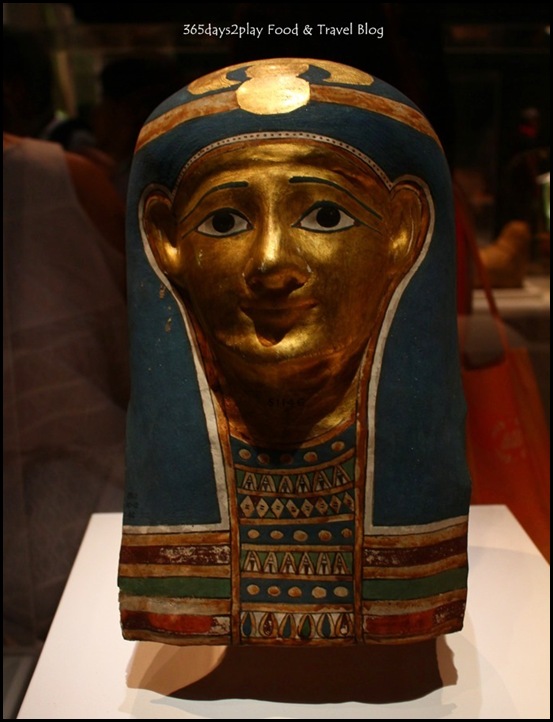 A friendlier looking head. This is a gilded and painted cartonnage Mummy Mask from the Roman period (after 30 BC). The youthful features of this mask were not meant to project a true likeness of the deceased, but instead served as an idealised image, suitable for life in the hereafter.The hair is dyed with the rare blue mineral, lapis lazuli. 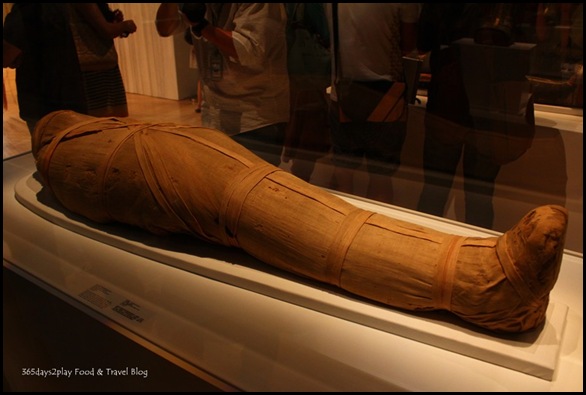 This is the mummy of Shepenmehyt during the 26th Dynasty (about 600 BC). X-rays and CT scans have shown that the body inside the wrappings is that of a young adult and is in good condition. A large bundle lying between the thighs may contain some of the internal organs extracted during mummification. Interesting to note that in those days, the brain was not thought to be of any use, so they saved the heart but threw away the brain! 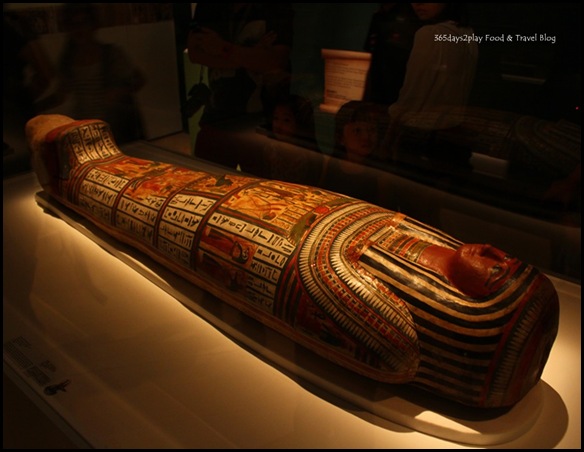 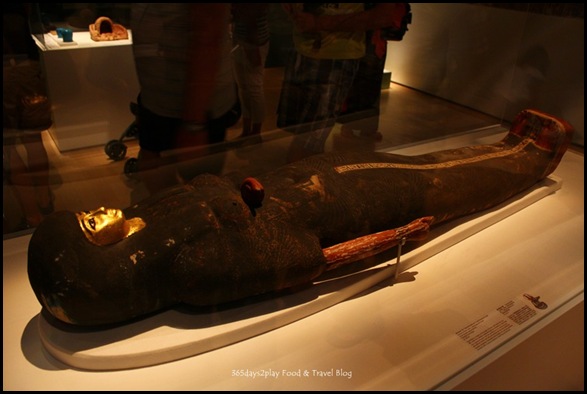 Mummy of Tjayasetimu. Still a child when she died, she was a singer in the temple of Amun. Her embalmed body has been enclosed in a cartonnage case representing her with the golden face of a divine being, and with her hands, feet and arms partly freed from the traditional mummy wrappings. 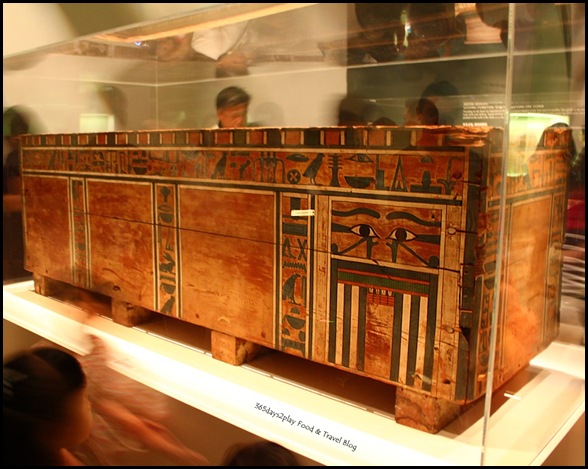 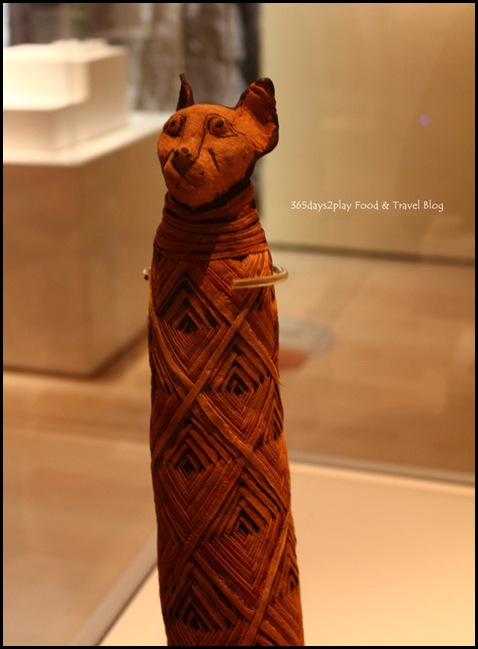 The cat was one of the animals most often mummified in ancient Egypt. Not to worry, only 1/3 of this mummification is cat, the rest is just cloth.

There is more to the exhibition than just mummies. I would highly recommend a visit to the ArtScience Museum to check out what the ancient Egyptians valued and spent their time thinking about. Certainly, all manner of action leading towards a good afterlife seems to be a significant part of their customs.

In keeping with the ArtScience Museum’s commitment to providing interactive programming, the exhibition will deliver a host of engaging and hands-on opportunities for visitors of all ages. This includes an interactive Embalming Workshop  which will shed light on the various steps and rituals that comprised of the embalming , mummification and cartonnage procedures of the time.

For more information on tickets for Mummy : Secrets of the Tomb, do visit http://www.marinabaysands.com/singapore-museum/. Do check out Essential Eames : A Herman Miller Exhibition which is concurrently on-going.

For more information on what to eat or do at Marina Bay Sands, visit https://365days2play.com/tag/marina-bay-sands/