After spending quite a number of days in the Alsace region of France and 2 days in Burgundy, we finally made our way towards Lyon for a 1 night stay. On hindsight, we really should have catered at least 1 more day in Lyon. Lyon is a huge city, and it is quite a joke we spent only 1 day there, but due to certain limitations, it was either 1 day in Lyon or none at all. I chose to still savour the 1 day, and the Partner and I agreed it was the right decision. 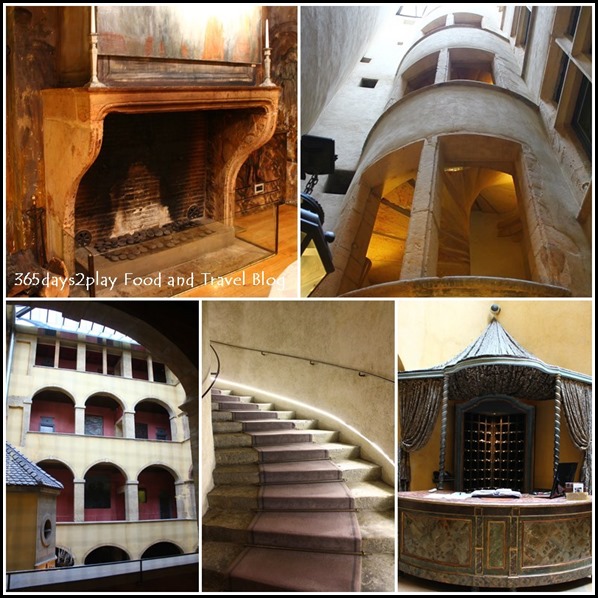 I don’t even know how to describe the look. At some parts, it kinda looks some medieval castle don’t you think?

For one, our 5 star hotel, the Cour des Loges was amazing. It is located in the Old Lyon part of Lyon, where everything is quaint, historic and cobble-stoned! Cour Des Loges comprises 4 restored Renaissance buildings set around a glass-roofed courtyard. You feel like you are in an artwork when you are in the hotel. The rooms are all different-themed, but all so stylish and modern, yet retaining the historic air of the hotel. Unlike the tiny lanes of Old Lyon, the hotel rooms are surprisingly spacious. 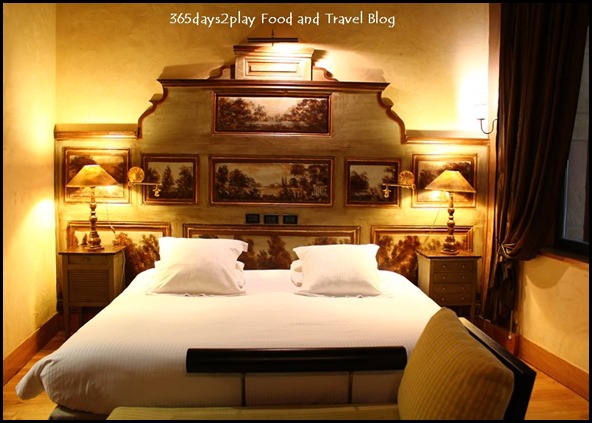 We had a lovely room facing the inner courtyard. Room number 5 if I remember correctly. The room is slightly darker than the picture, but I’ve enhanced it for you to see clearly. I really love the use of wood in the ceiling and floor, which gives it a kind of Scandinavian feel, yet it is unmistakably not when you study other details in the room. 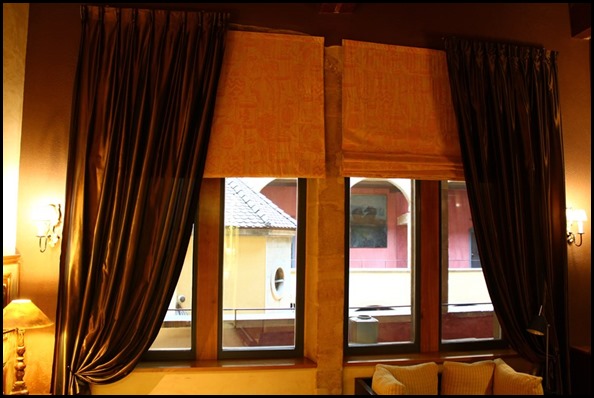 Our room faces a quiet corridor. Kind of weird at first, but from the outside, you can’t actually see in unless you press your face to the glass. It can get slightly noisy during dinner time because the Loges (1-Michelin starred restaurant) is where the courtyard is and the noise travels up a little. 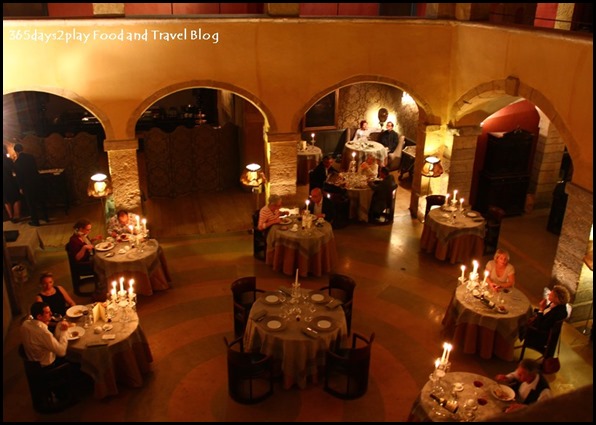 This is Les Loges Restaurant, the 1-starred Michelin restaurant at Cour des Loges, at the Florentine courtyard with a marble floor. 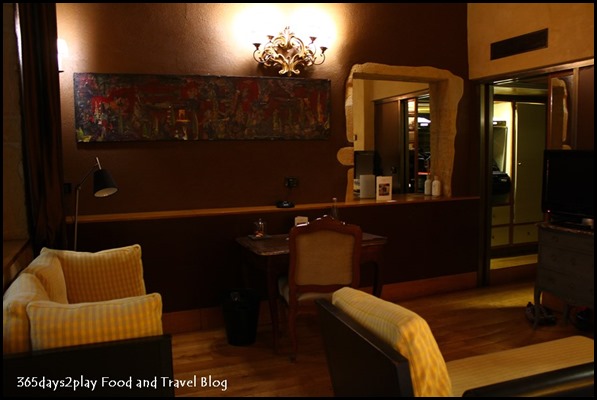 More artwork on the walls, plus lots of mirrors where the closet and door are. Speaking of which, this was the only hotel which had a raised platform big enough for TWO suitcases 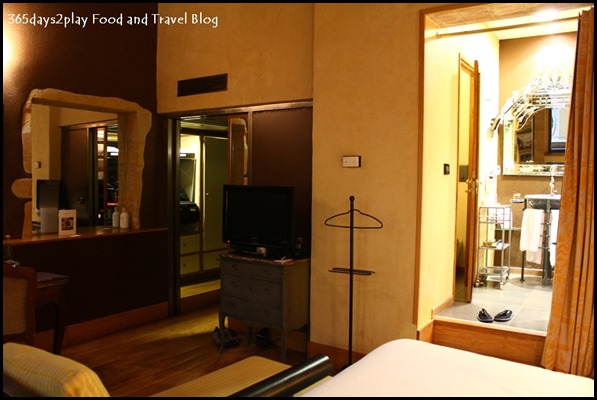 Curtains separate the bedroom area from the bathroom. Oh I have to mention that of all the hotels we stayed at in France, this was the hotel with the most number of TV channels! Even a Christian channel! 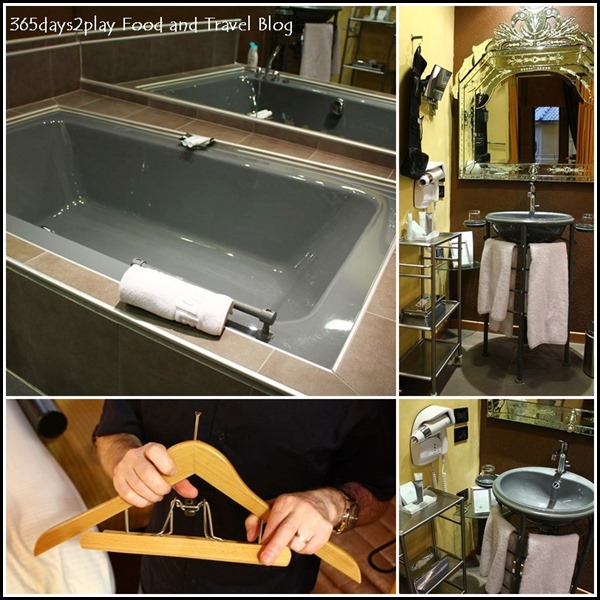 The bathtub is rather unique as compared to most other generic bathtubs. It’s quite wide, so 2 people can fit in easily without any problem. However, it is shallower as compared to usual. The hangers provide here are quite ”high tech”. If you prefer, you can use the clip function for clothes that can’t be hung easily. 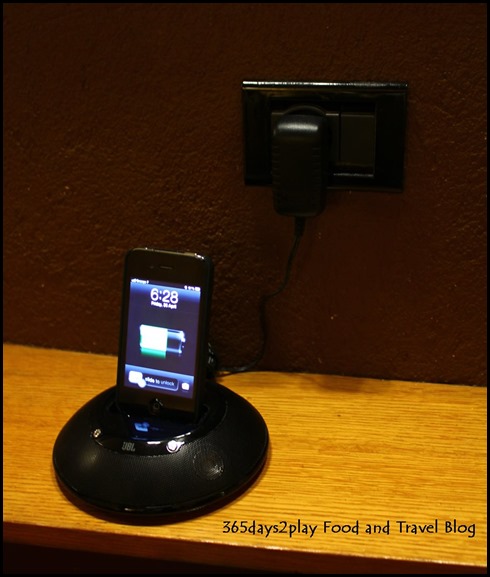 Useful gadget available in the room to charge my iPhone. 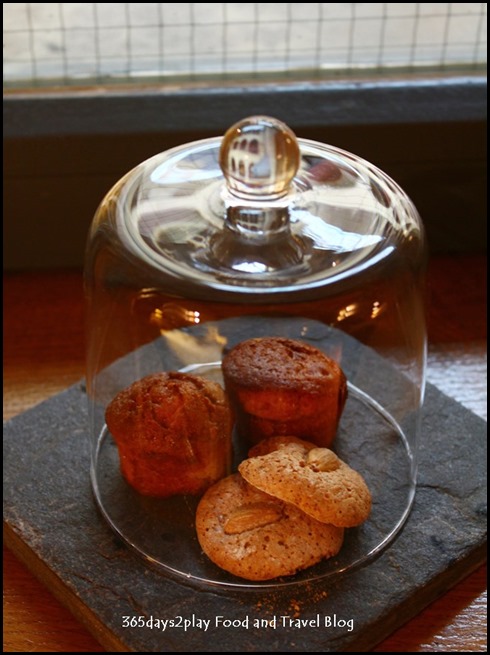 We spied a little something to welcome us to our room. 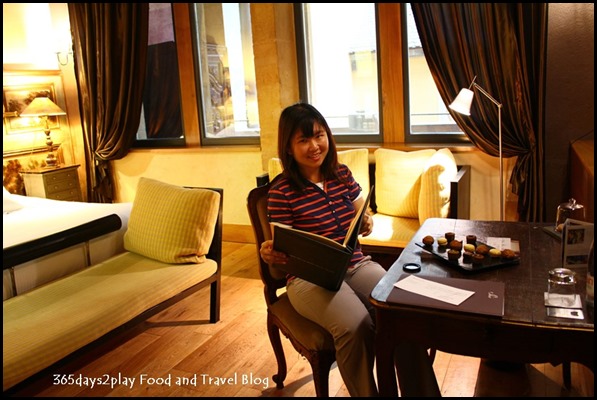 I suppose most tourists don’t bother sitting at the business desk in the room, but for me, this aspect of the room is not forgotten. As a travel blogger, I almost always have my laptop with me and it’s great to be able to catch up on a bit of blogging or sort out my photos at the end of an eventful day. 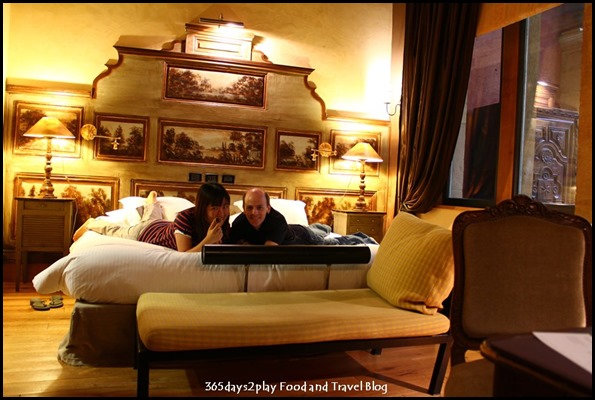 Must remind myself to take more pictures of ourselves while in the pretty hotel rooms! 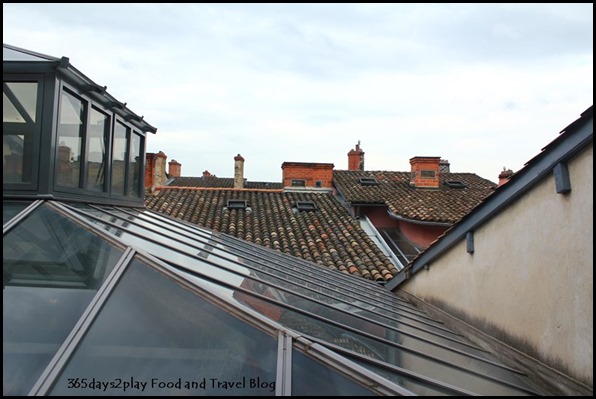 We did some exploring of the hotel before our dinner at Cafe Epicerie. Here’s the view, or lack off from the near the top of the hotel. Every time I see roofs like this, I am reminded of the chimneysweep song in Mary Poppins. 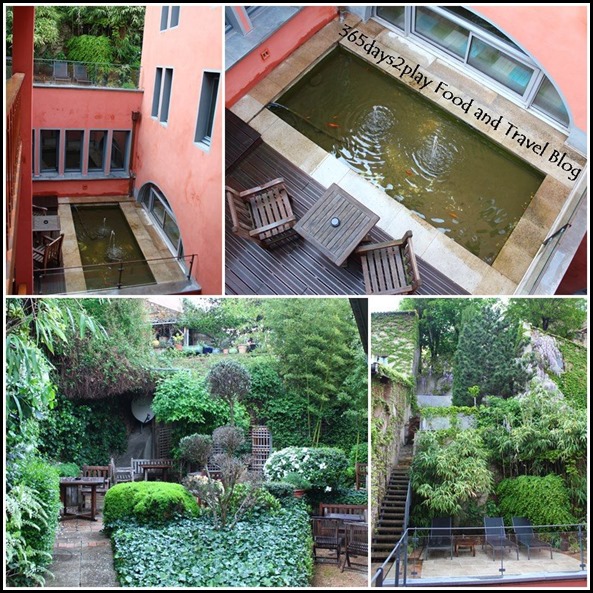 There is also a nice roof garden, also known as the hanging gardens stuffed into the hotel. It’s great to have something like this in Cour des Loges because the rest of Old Lyon is actually quite plant sparse. You could hear birds chirping here and smell the fresh smell of nature from the plants. There are rooms that also open out into the hanging gardens. There is also a Spa Pure Altitude, but unfortunately, we didn’t have the time to use it. 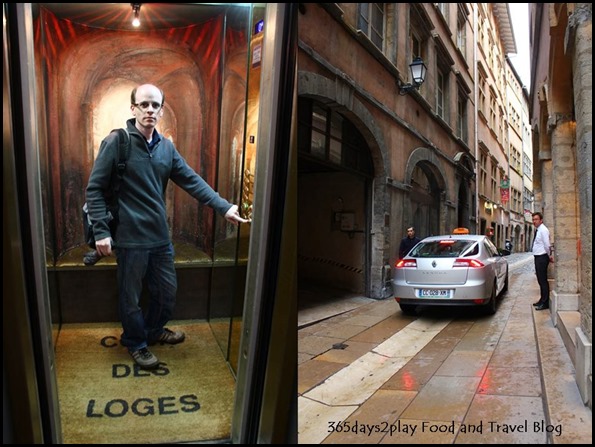 See, I told you that the streets in Old Lyon are really narrow. But still, will you believe it that 2 vehicles can pass each other on this street???!? I kid you not when I say that we drove past a delivery truck on our way to the train station the next day. How we did it is still a miracle, but the people from the delivery truck were unfazed. They simply came to our car, pushed the side mirrors shut and indicated that it was okay to go. All in a day’s work. 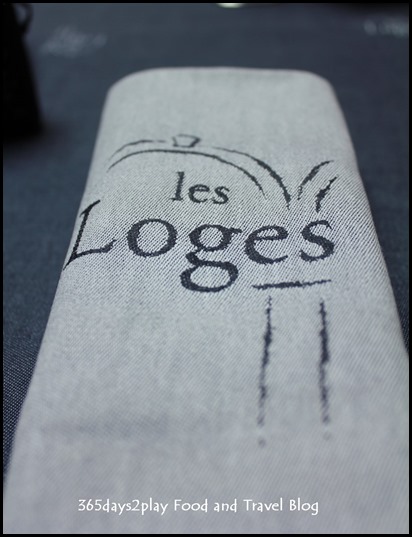 If there’s one thing not so ideal about Cour des Loges, it is that it takes some effort to navigate to the hotel. Because there is a no-driving policy in Old Lyon, only authorised vehicles (hotel guests who drive included) are allowed. The hotel will provide you with a password, which you must key when you get to the bollard sticking out of the ground! Quite likely, your GPS navigation system will indicate the wrong place, because of the narrow roads. We had about 200 metres more to drive when the system told us we had arrived. We were very near the hotel the way the bird flies, but not so by road! My advice is read the map really carefully before you get to Lyon and keep your eyes peeled for the tiny road signs. And if the road looks too narrow to drive down, it’s probably the correct one, just go!

But I can tell you that staying in the heart of Old Lyon is definitely worth it. You can read my review on Old Lyon here. I would stay at Cour des Loges again in a heartbeat if I had the opportunity.

Cour des Loges is part of the Small Luxury Hotel of the World group and the Maisons and Hotels Sibuet group. I had the pleasure of staying in 8 SLH properties. Thank you very much Cour des Loges for the generous hospitality! Merci Beaucoup! 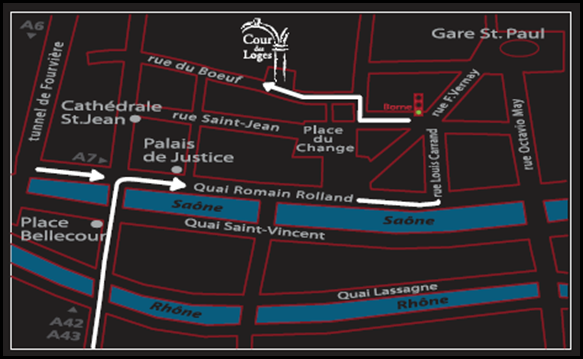