When it comes to fine dining, I think the French win hands down. Really, of all the grand, fine dining restaurants I’ve been to, the ones I’ve enjoyed the most happens to be the French restaurants.  So I was really happy to be invited to lunch at the exquisite Michelin-starred Pierre Gagnaire in the posh Lotte Hotel. 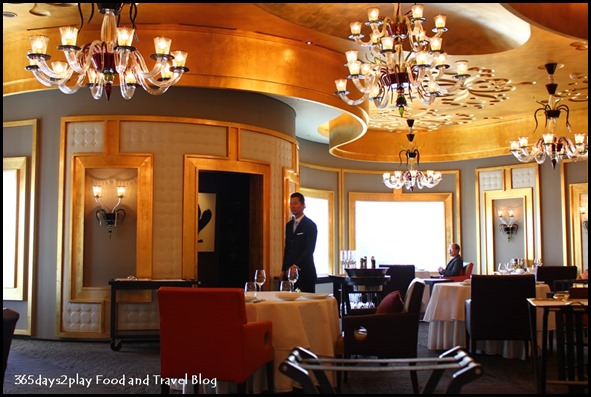 Pierre Gagnaire Seoul is located on the top floor of Lotte Hotel just across the popular Myeong Dong shopping district. If you want to splurge during your holiday in Seoul, or just want a romantic night out, Pierre Gagnaire would certainly be a fine option. I was amazed at how spacious the restaurant was as the few tables in the restaurant were all widely spaced. It was a pity I could not get a better shot of the restaurant as it seemed a tad rude to disturb the ambience by standing up to take pictures. 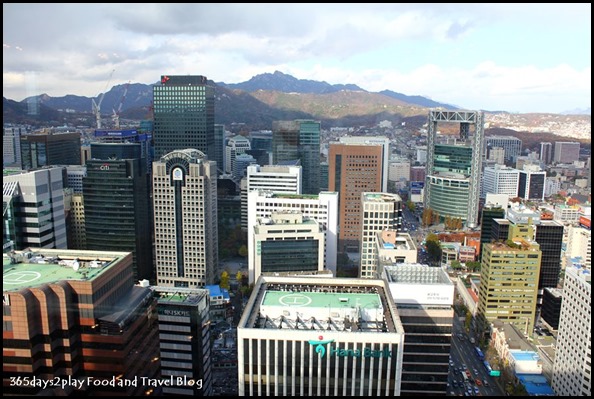 The view from Pierre Gagnaire is fantastic.You can see the uniquely shaped Jongno Tower in the distance, as well as the tallest building in the picture, the SK building. The height limit for buildings is actually lower than this. Wonder what they did to be able to construct their building to such a height. 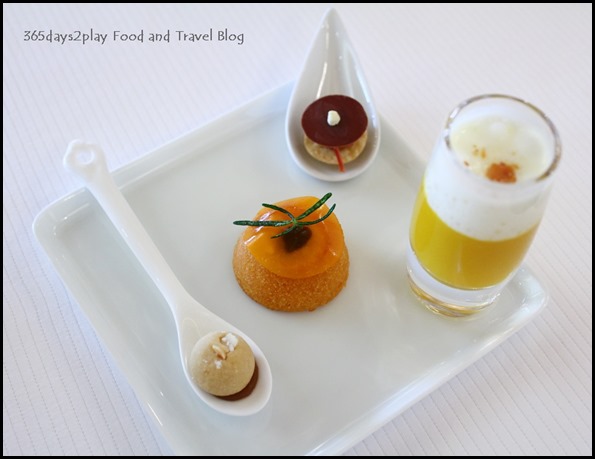 We were first served a few petite bites prior to our starters. Come to think of it, fine French cuisine is similar to Korean cuisine in that you will be served numerous surprises ”amuse bouche” throughout the meal, just like the Korean side dishes / banchan. But one thing’s for sure, the French delicacies are so exquisite looking! 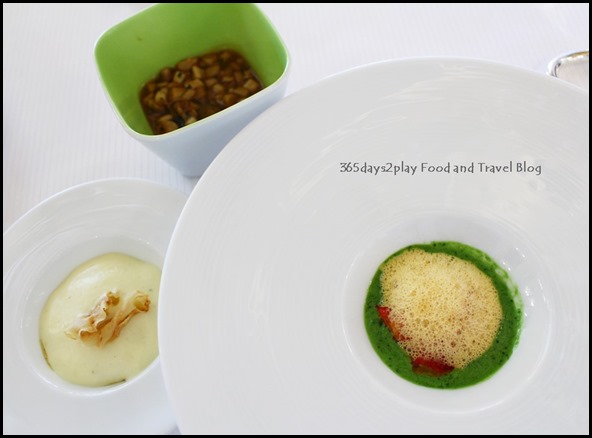 I really liked the lobster tail hot traditional bisque. The richly savoury flavours really whetted the appetite, yet it had a lightness to it, befitting of an appetiser. The parmesan cream with pancetta ham was also delectable, although I wouldn’t have minded a bit of extra texture to it. 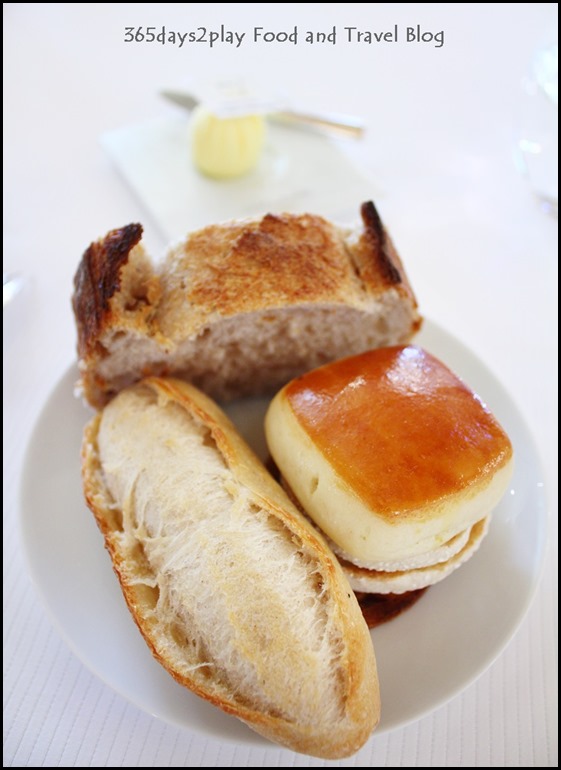 Oh let’s not forget the assortment of breads that were served together with the meal. Seeing this, and the French butter reminded me so much of our honeymoon in France where we dined nearly every night at lovely French restaurants. If you’ve never savoured a good French meal over the course of 3 hours, I would really recommend that you do. 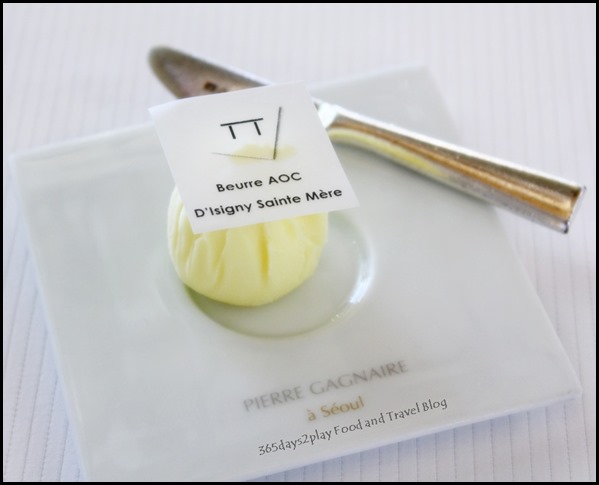 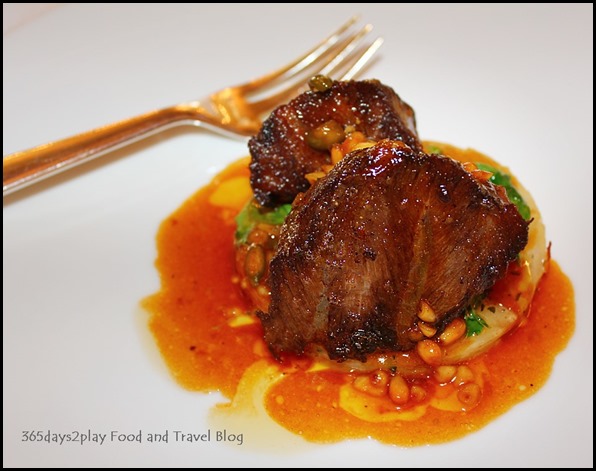 The Partner and I enjoyed the mains very much. The beef cheeks were supremely tender, and they just fell apart at the touch of the fork. The pine nuts added an interesting texture to the dish although I thought the addition of capers and anchovies was a tad unconventional. 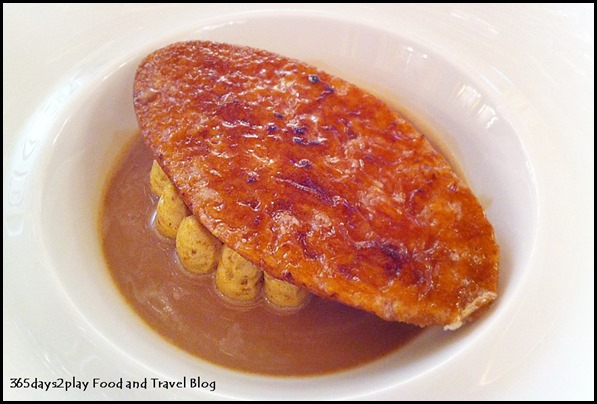 For dessert, we had La dessert de Pierre Gagnaire, aka Pierre Gagnaire’s dessert. The dessert, which seemed to be humongous in comparison to the previous dishes, is basically a thin caramelised crust biscuit perched atop hazelnut puree served in a bowl of chocolate sauce. If there’s any question of not being full after the main course, this dessert would leave you with no doubt that you wouldn’t be needing any more food for the rest of the day. Despite it’s looks, the chocolate had a very light taste, with the oomph being provided by the creamy and nutty hazelnut puree and the crunch from the caramel layer. 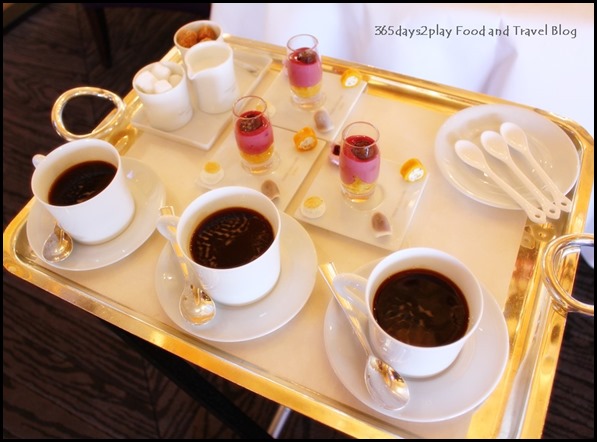 But no French meal can be over without coffee and petit fours! 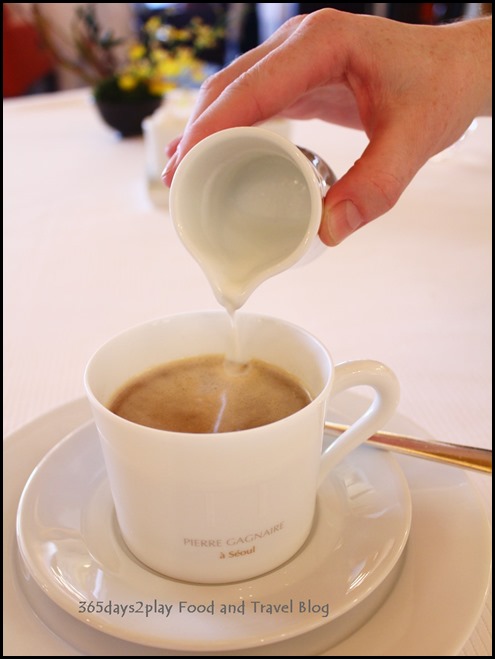 Coffee was so so actually. 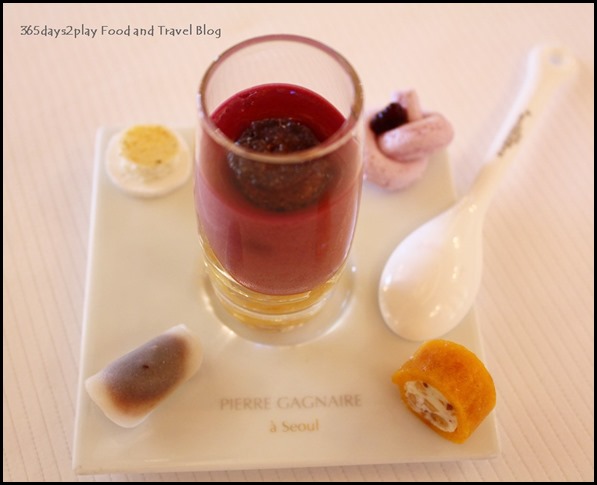 Last but not least, the pretty petit fours. Most restaurants usually serve chocolates or madeleines, but Pierre Gagnaire decided to outdo themselves by providing 5 petit fours, ranging from a small piece of cheese, fruity marshmallow, apricot nougat and wild berry panna cotta. 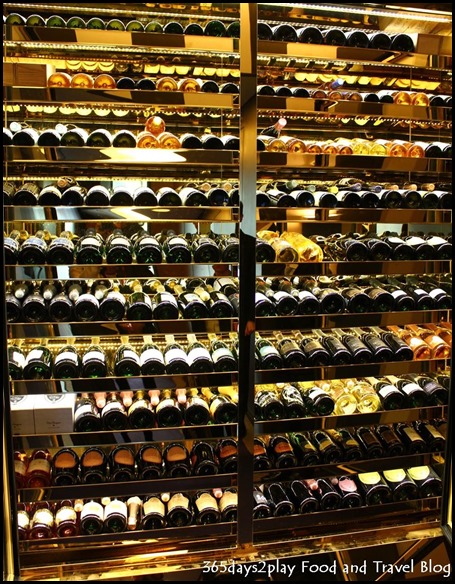 Pierre Gagnaire a Seoul also boasts 4 private rooms as well as a wine bar worth checking out. 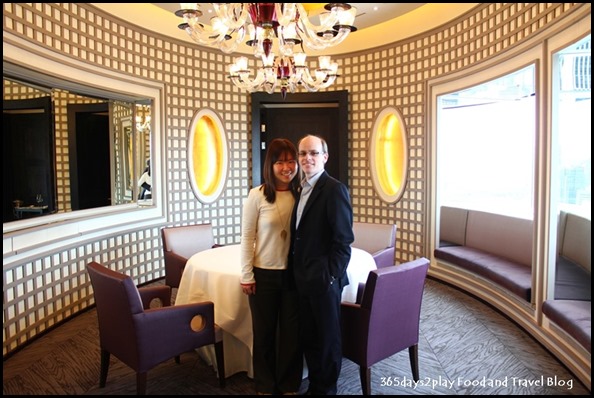 We are standing in one of the private rooms.

All in all, it was a lovely meal in a lovely restaurant. The Partner and I would like to thank Gloria of Lotte Hotel for hosting the lunch and the entertaining and insightful conversation!