Finally had the chance to visit The Joy of Toys located at Clarke Quay Central Mall. I’d heard about it a couple of months back and found the concept to be quite attractive yet pretty unique in Singapore. It’s a wonder why there aren’t more of such indoor children’s play areas around.

Ok when you think of a children’s indoor playground / play area, you tend to visualise one where there are many slides, ball pits, tunnels etc for the children to run about and explore, aka gross motor skills type of play. Think Cool de Sac, Kids Amaze, The Polliwogs etc. There will also be a small area with fine motor skill toys and pretend play toys such as lego, puzzles, play kitchen, dolls etc, but these tend not to be the highlight of the business.

The Joy of Toys is quite different. There are no slides and tunnels. Per their website, they offer

There are a lot of wooden toys, and the whole area, especially the toddler area is furnished in a very pleasing and soothing way. While I was at the toddler area, I suffered from room envy and wondered more than once why I am not able to create a playroom looking like that for Edward. 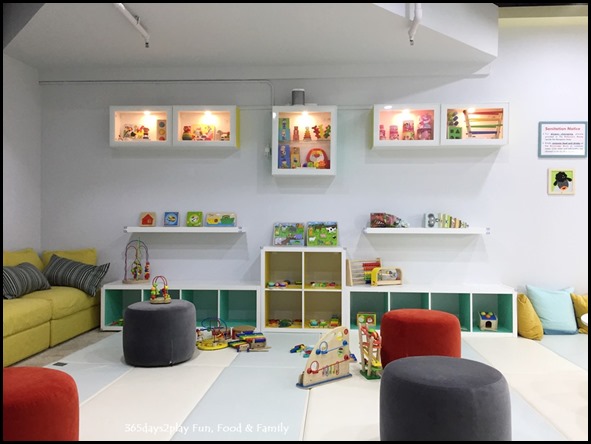 What’s the difference between the toddler play space vs the main play space? 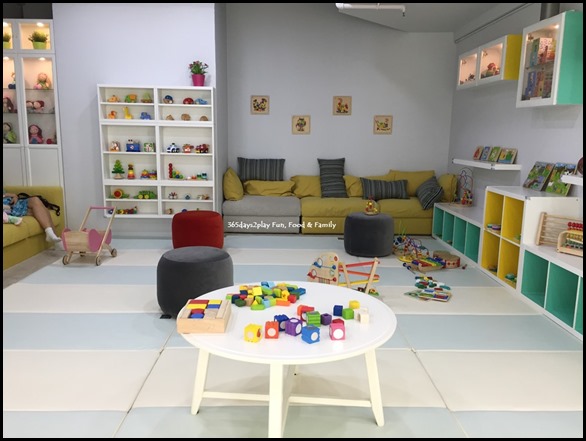 This is the toddler play space. It’s large enough that there’s ample toys to play with. One very important point is that it is completely segregated from the older children play area so there is no worry of kids older than 3 years barging into this safe haven.

I really love the way this space has been decorated. The colours are nice and soothing. It’s not hard concrete flooring. Instead it is mostly covered by soft play mats, and a bit of carpeting next to the sofas. Very suitable for crawling babies, and safe for toddling toddlers. The toys are placed on shelves  or on the tables. The website indicates that children are free to go take the toys and parents need not worry about having to clear up the toys as the staff will do it. I love that that point has been made very clear so I can just let Edward play to his heart’s content, with me relaxing on the sofas.

The toys are wooden toys, and so colourful. I really love looking at them, and imagine, if its attractive to adults, it surely must be so to the kids? 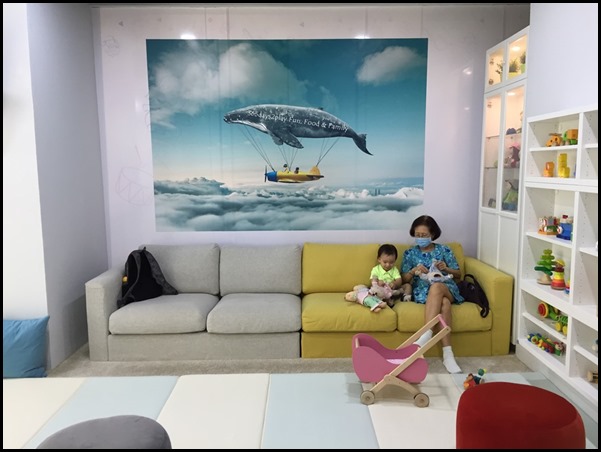 Love the ample sofa seating. In fact, this is the most relaxing indoor playground I have brought Edward too. I don’t have to follow him like a hawk (worrying that he’ll hurt himself or something). Me and my mother sat on the sofas most of the time! It’s not only a baby and toddler friendly area, it’s also parent and grandparent friendly! 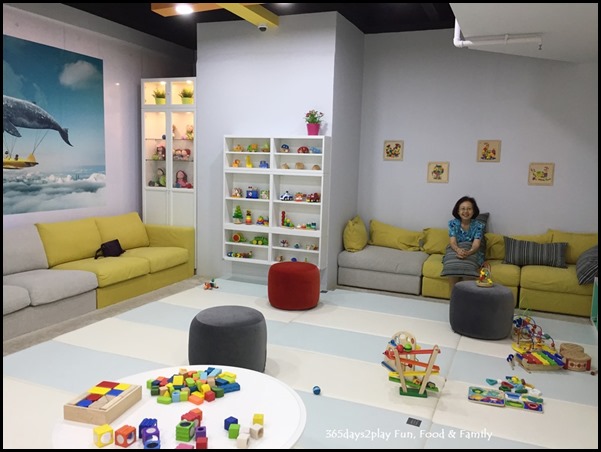 You see my mother looks so comfortable there! 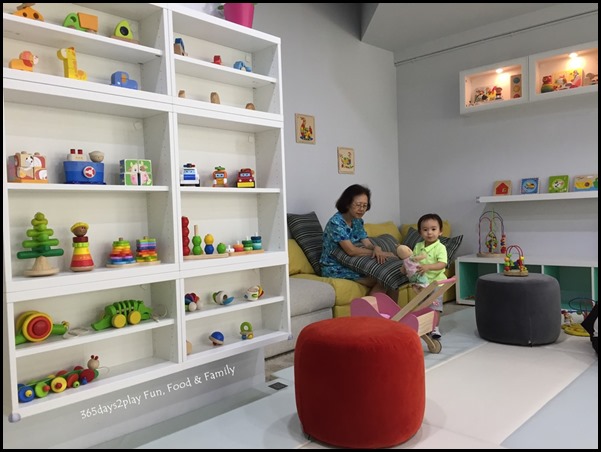 Here’s Edward holding up a doll for Por Por to inspect. He loved the little baby pram and pushed it all over. 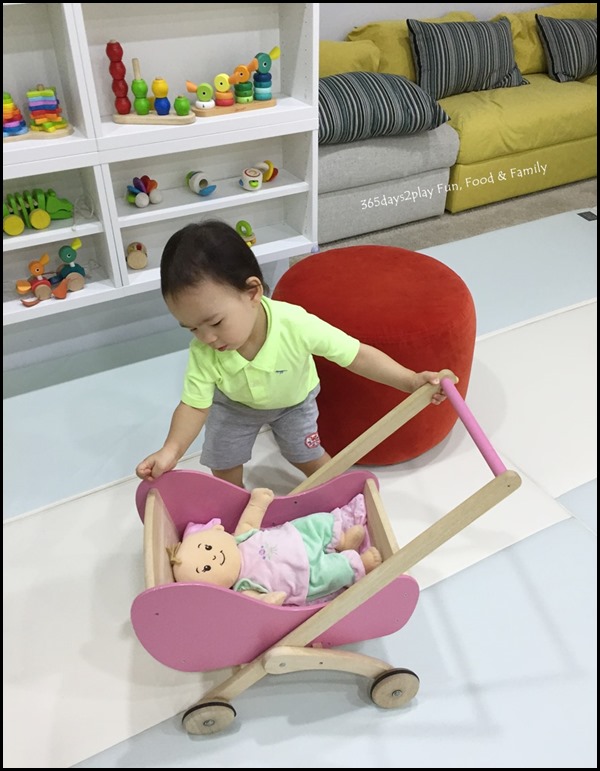 Here’s him trying to navigate the pram. The wheels can’t turn so he ended up pushing it to one end, and pulling it back to the other end. 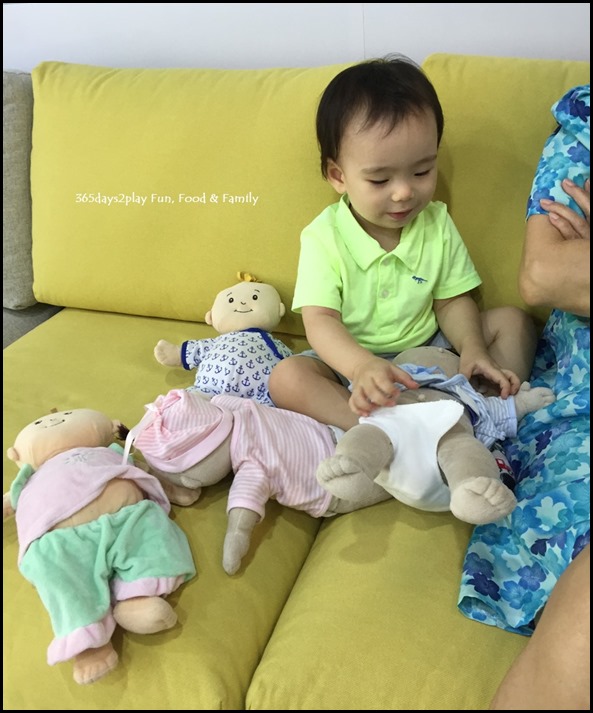 Didn’t know he liked playing with dolls. He shrieked when he saw the belly button on one of the dolls, it was hilarious! Also hilarious when he carried one of the dolls and the diaper dropped off! 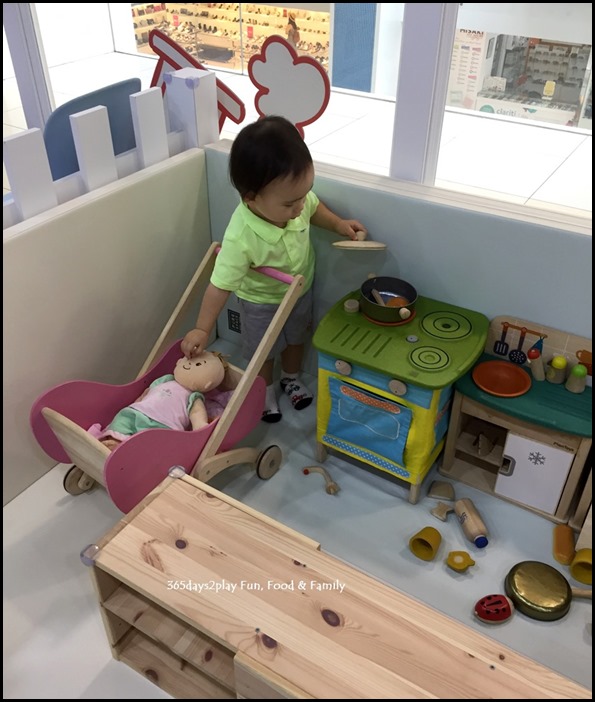 Not too sure why he would want to bring the baby into the kitchen? He looks like he wants to put the doll in the pot! 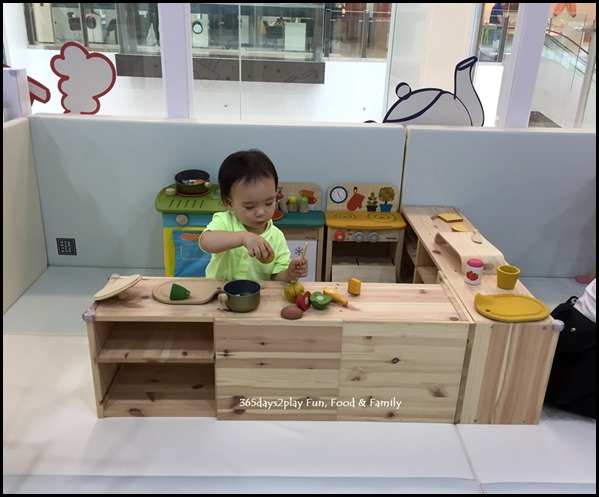 Decided to chop up some vegetables. We have a similar set at home that he got for his 1st birthday. Glad to see he now uses the correct end of the knife to do the cutting. 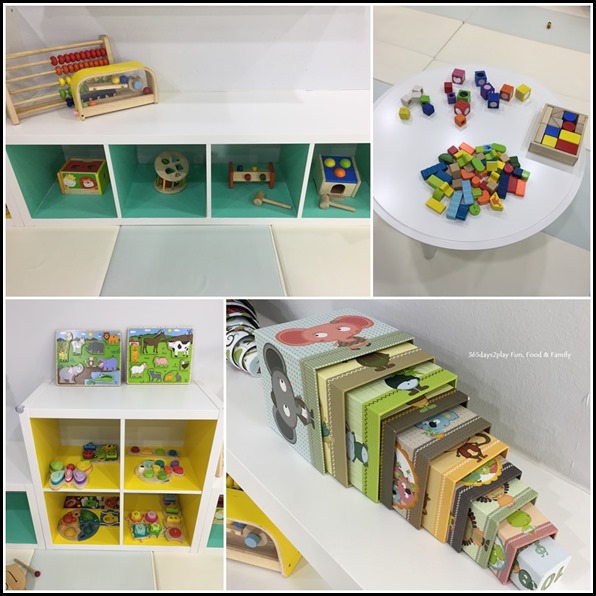 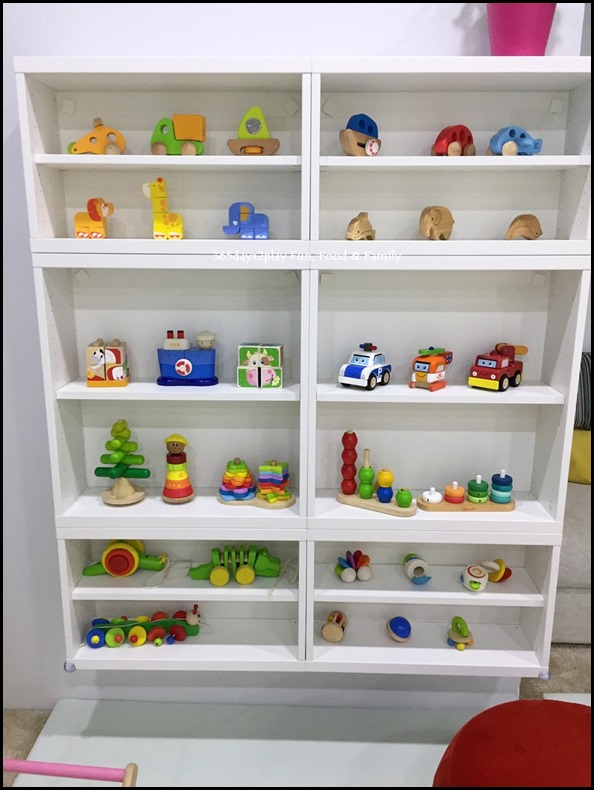 Here’s a close up of some of the toys. All largely wooden toys. Lots of puzzles, Montessori type toys, blocks, stacking toys, vehicles, musical instruments etc. How I wish I could have a room in my house just filled with all these play toys. 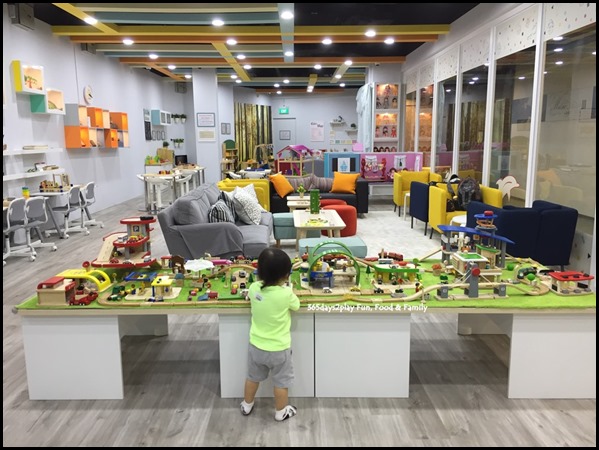 This is the Main Play Space for kids 3 years and above. No more soft mats, but more toys for dramatic play and of course the huge train set that every kid will love!

Edward played at the Toddler Play Space for over an hour before I dragged him here to explore. I figured it makes sense to pay a bit more to visit both spaces, so I know whether it’s suitable for him or not. I only regret not coming earlier in the day, and spending more time at The Joy of Toys! 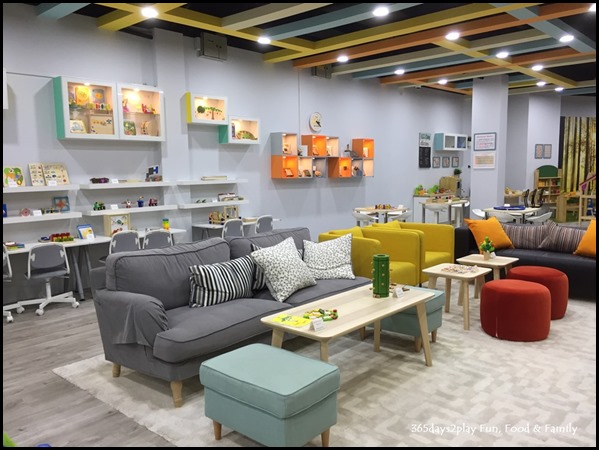 Ample seating area for the adults, although the sofas here are narrower than the toddler area. 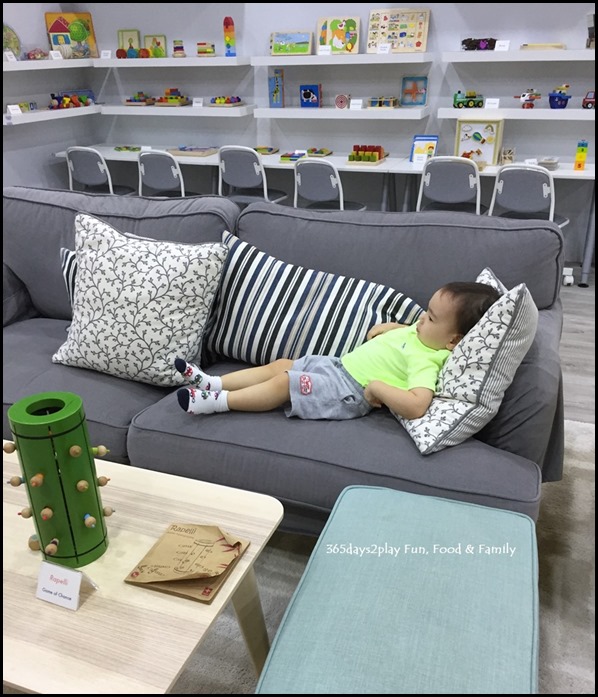 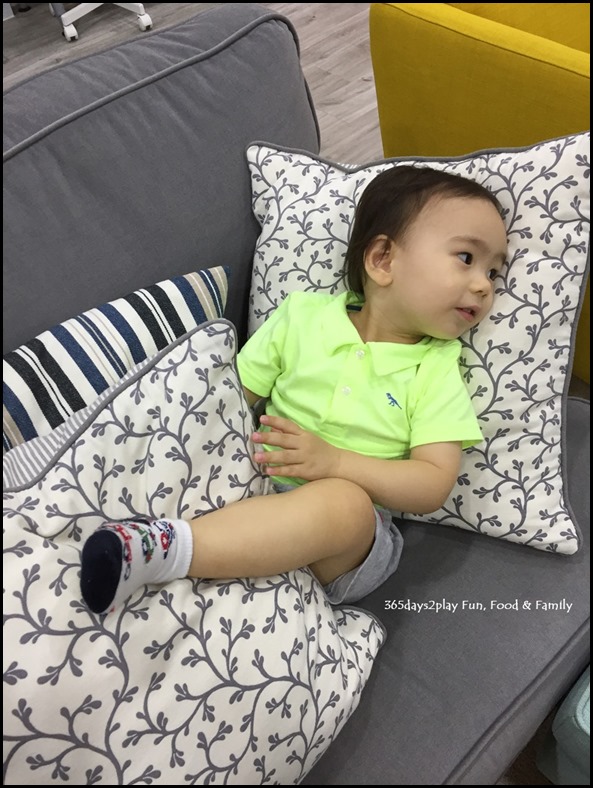 Speaking of sofas, did you know sofas are Edward’s favourite thing???? Here’s him making himself really comfortable. I thought he might take a nap since it was 3pm, but after a short rest he jumped up again and continued playing. 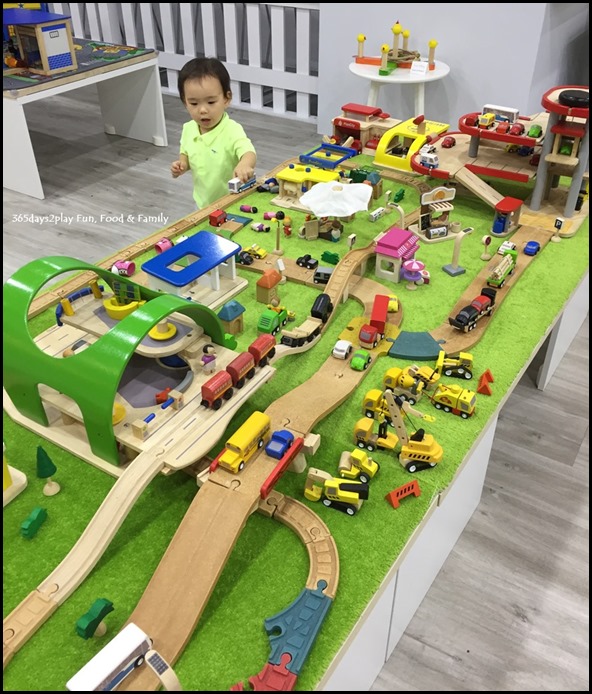 Trains, busses, diggers, railroads, ramps! Edward insisted on driving the bus on the rail-track! Can’t blame him since it was easier for him to reach the rail-track. 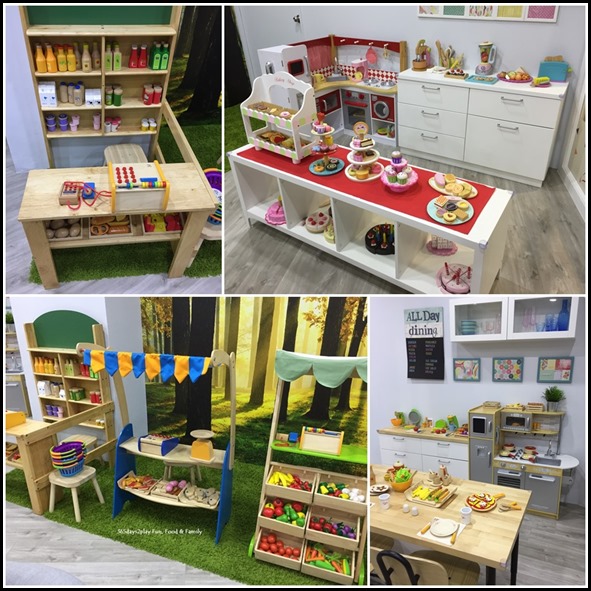 But it’s at the pretend play area where he spent most of his time at the main play space. He absolutely loves kitchens and supermarkets. Maybe I should consider buying a kitchen set or do a makeshift one. A pity there are no supermarket trolleys though, that was his absolute favourite thing when he visited CityLife at I12 Katong. All those fake veg and fruit and milk cartons will be loaded up into his trolley! 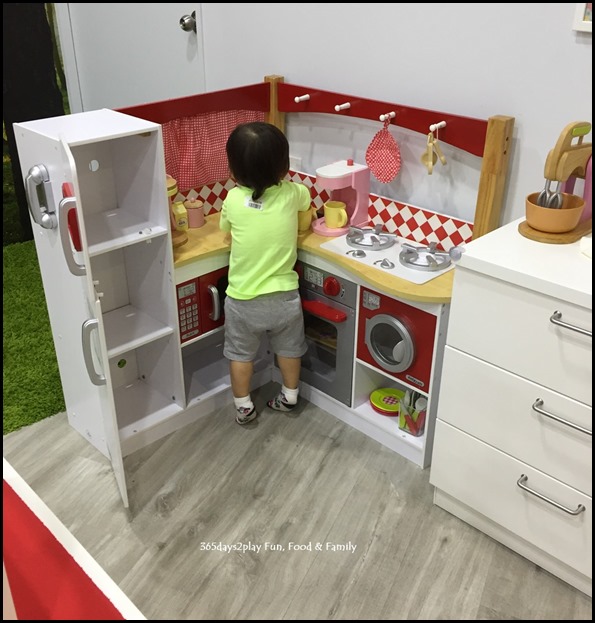 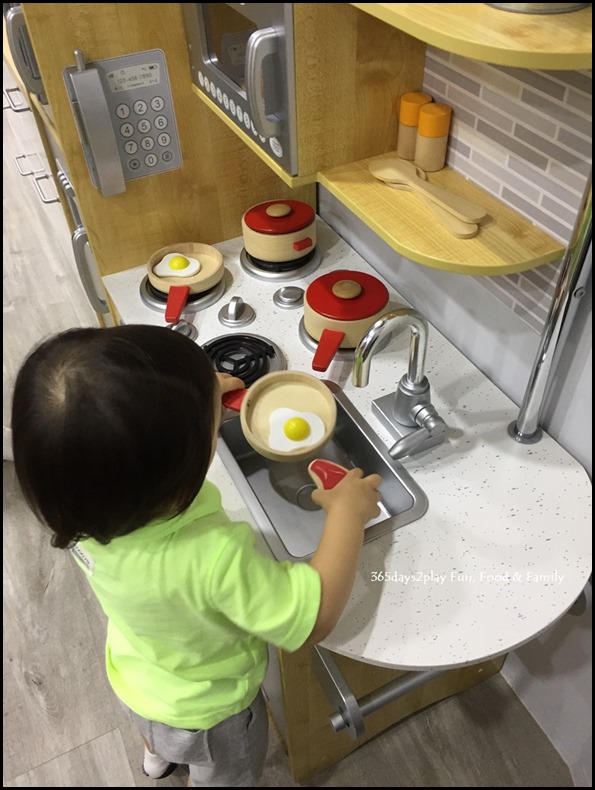 For a moment I thought he might be upset that no real water comes out of the tap, since he loves water play at home. But he was game to pretend that there was water coming out. He came back to ”refill” the jug numerous times! 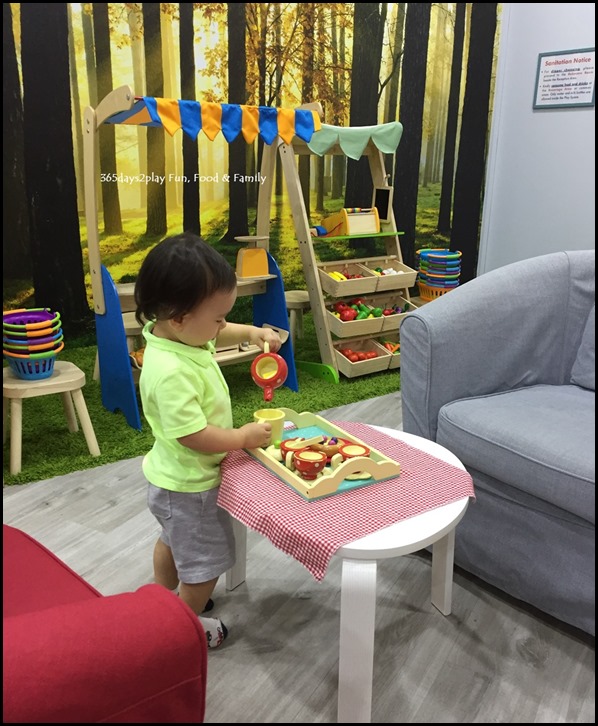 Look at the amount of tea he forced me to drink! At last count I downed 16 cups of tea! At first his tea pot was like a bottomless tea pot, until I told him that the tea had run out, and he went back to make more. Hahahaha! 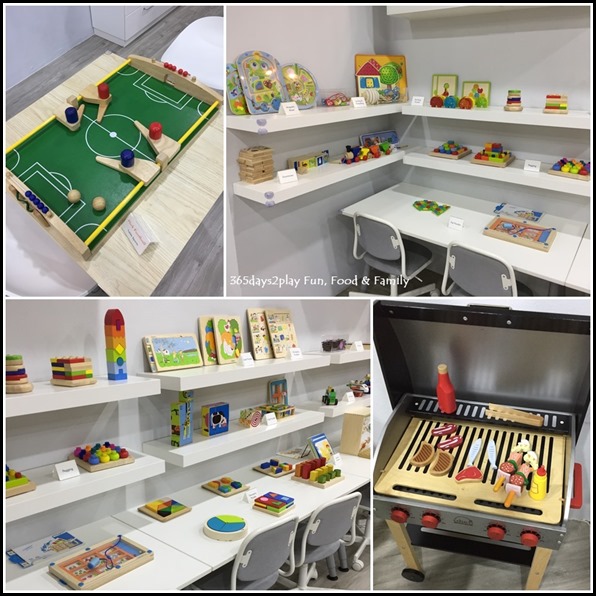 Other toys that we didn’t have time to play… There are some musical instruments too but I’m not too impressed by those. They are out of tune! And since I studied music in school, I make it a point not to let him play with instruments that are not correctly tuned. 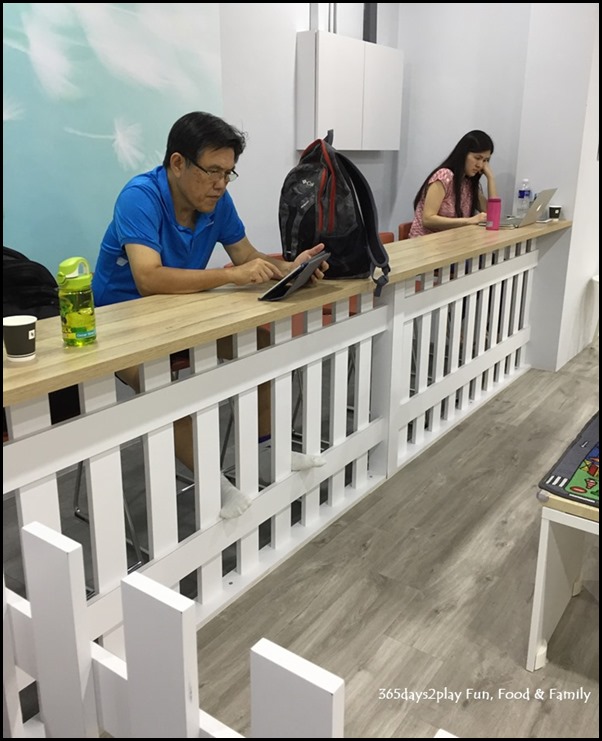 The main play space has an area for parents to do some serious work or have a meal (bring your own), should you need to. There is a vending machine with quite affordable snacks like $1 kind. Also you can purchase coffee pods for the coffee machine, if you feel you need a boost in order to keep up with your kid. There is also a baby changing room at the Toddler Play Space.

The Joy of Toys