You know what, many people would frown upon this post, but the truth is the truth and I am not embarrassed to say it. I love McGriddles from McDonalds!!!

They’ve had a long time in coming up with a new breakfast item, and they finally did so with McGriddles sometime earlier this year or last year perhaps. You know even from the ad on TV, I already knew that it would be something I would really like. But because people around me don’t really want to go to McDonalds, I never got the chance to try it.

Well I finally did last week, and it is TASTY. I got the McGriddles with Sausage and Egg. It is similar to the Sausage and Egg McMuffin, but I believe the sausage patty is somewhat bigger. But what makes it really different is the 2 halves of the bun that they have soaked in Maple Syrup. The entire combination when chomped together goes really well!

I have no idea as to the fat content of this thing, but I am definitely going to have it again sometime soon, and perhaps go for a jog after that. McGriddles is available in Singapore, but I don’t know if they already have it in other countries. I’ve tried the breakfast biscuit in USA, which is again something like the Sausage and Egg McMuffin but with biscuits as the buns instead of bun bun. It was decadent but so delicious. I wish we had that in Singapore too. 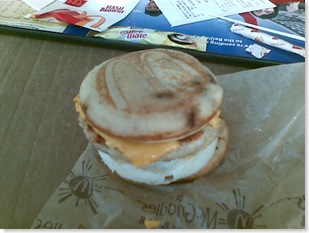 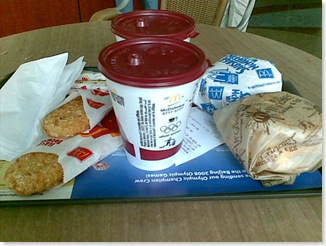 And I love hash browns too.

What to eat at East Coast Park – Seafood Centre