I normally like to write about places I’ve enjoyed, but this place takes the cake as the most spartan restaurant I have been to, that I just have to give my 2 cents worth about it. 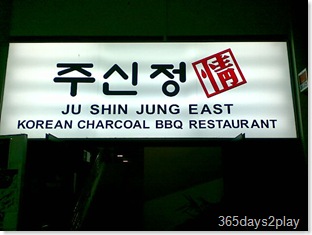 Several weeks ago, I thought I would give Ju Shin Jung East Korean Charcoal BBQ Restaurant a try. The restaurant is actually on the 2nd floor although the entrance is on the 1st floor. As I was ascending the steps, I was already regretting because the staircase looked so unkempt and dirty! When I reached the restaurant itself, I must say I was quite overwhelmed! By the “spartan-ness” of it all! 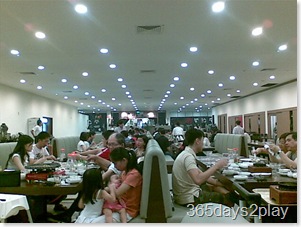 The entire restaurant, if you can call it a restaurant to begin with, had bare concrete floor! The restaurant is quite cavernous actually, so the bare concrete really hits you. Plus there are rows and rows of tables, making it feel like some army camp or the like! There were pipes going along the floors, so they had black rubber ramps for you to walk over the pipes. It just makes me wonder if they decided to “build” a restaurant here in 3 days or something!

I felt like making a U-turn to leave the restaurant, but since this is at East Coast Park, there is no other restaurant nearby except Waraku and the ultra crowded Long Beach seafood restaurant. In fact, perhaps Burger King downstairs would have been better. Surprisingly, the restaurant was quite packed! Most of the patrons were families having their charcoal bbq. I tried to look for suffering patrons, but it seemed everyone was engrossed in cooking their food than at the ambience.

My partner and I ordered their Bi Bim Bap instead of the Charcoal BBQ because we weren’t there for the BBQ in the first place. It was a bad move. Maybe the restaurant’s core competency is in the Charcoal BBQ, because the Bi Bin Bap was TERRIBLE. It was edible, but it was in my opinion worse than what I normally get at the Food Court. And I had to pay $13+++ for it! The only consolation was that they gave lots of small side dishes, I think about 10.

Maybe it’s just us, but we had an experience to forget at Ju Shin Jung. Maybe we should have ordered the Charcoal BBQ. Who knows, perhaps that’s why the place is nearly full despite its surroundings. Maybe this place has to be compared to why people don’t mind rude hawkers just to taste the most heavenly Char Kuay Teow or something. But for me, you won’t be seeing me here in a long time. 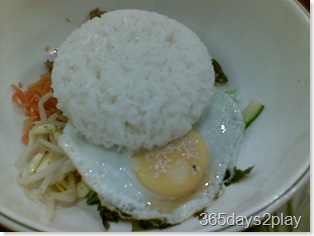 This was the Bi Bim Bap served. Looks as spartan as the place itself. 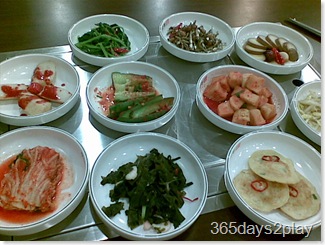