Ever since the reopening of The Ship Restaurant & Bar at Shaw Centre, I have gone back not less than 3 times for lunch there. Years ago, before my blogging days, the Partner and I would frequent The Ship for dinner after work just because we loved the old school atmosphere there, and the food was pretty affordable. We’d be sure to get a nice booth table too as there were plenty to spare. We’d always order steaks.

So I was glad when The Ship finally reopened after Shaw Centre’s renovation. Even though they opened a second outlet at NEX, it didn’t strike me to go there (Serangoon not being too convenient for us either) as there wasn’t the same nostalgic feel to it. The revamped The Ship now looks more modern and spruced up, largely thanks to the glass windows running across the entire length of the restaurant. They don’t have as many booth seats as before I think. It’s hard to snag one now especially during lunch time. 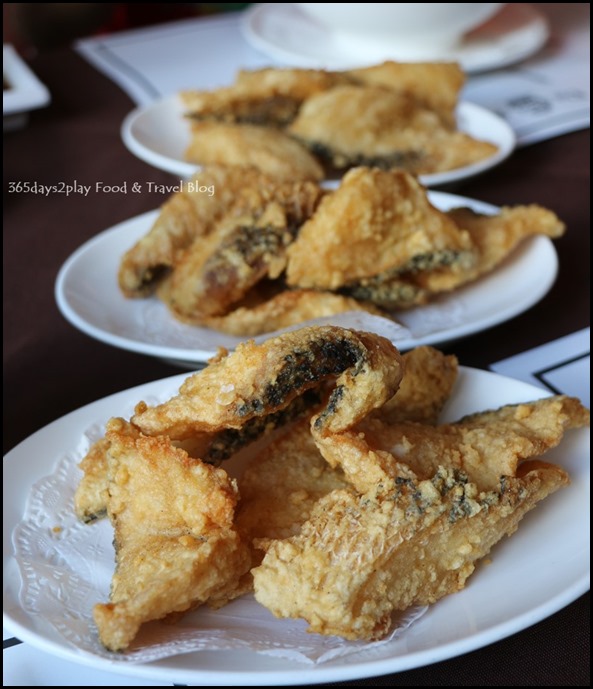 I had no idea that The Ship was famous for its Fish Soup Noodles. Most of the items on the menu are Western dishes. But guess what, half the people dining at The Ship order the famous fish soup noodles, and so have I for the 3 occasions that I’ve been back. 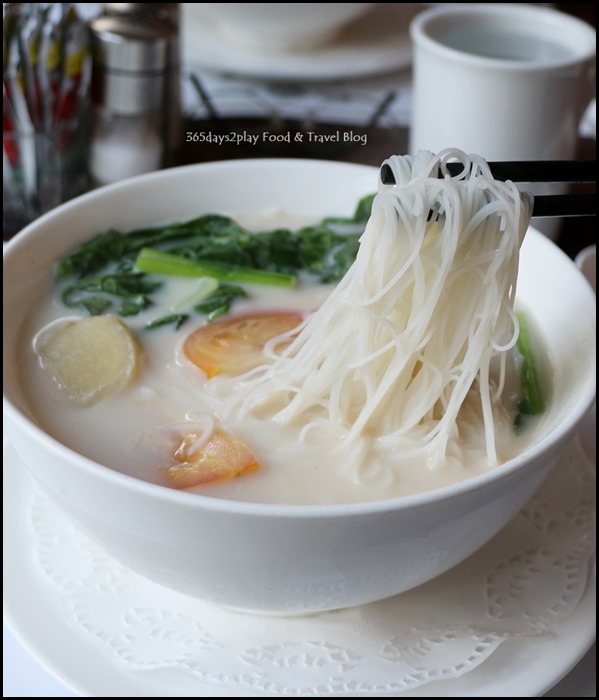 You can even choose between thin or thick bee hoon noodles. As a rule of thumb, I’ve always preferred thin noodles because I find the thicker ones too slippery to handle. But I have to say, after trying the thick one twice and the thin one once (in that order), I will go for the thick ones from now on. It just tastes better, no idea why, but perhaps the smoothness of the thick noodles helps you slurp them up faster. 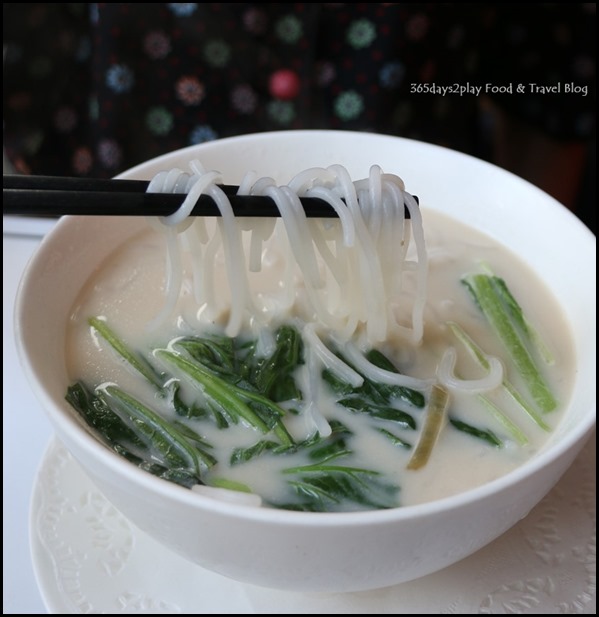 For $12.90++ for the fish noodle soup that comes with dessert and drink in a restaurant in Orchard Road, isn’t that a great price? 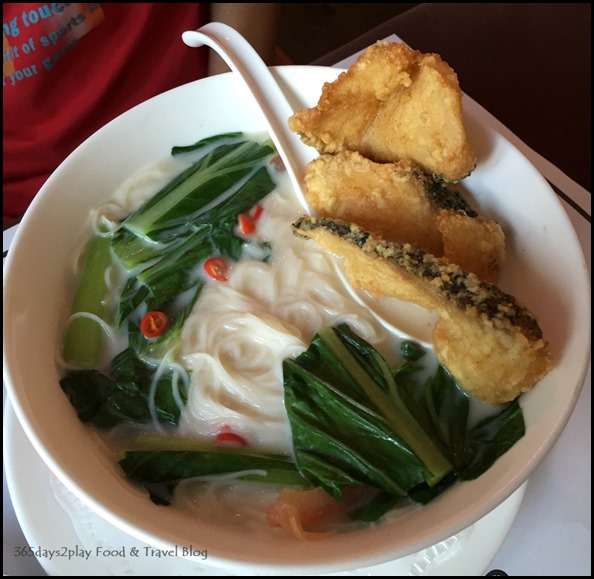 Here’s another shot of the fish noodle soup 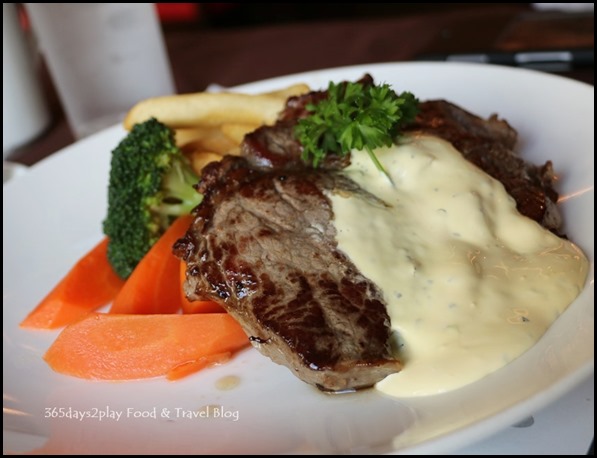 Well as usual, the Partner did not order the recommended, and went for the steak instead, him being a meat person. Glad to report he enjoyed his dish very much. The steak was cooked just right, and was flavourful and tender, without much gristle. The bearnaise sauce was really enjoyable too and just the perfect sauce to go with the ribeye. 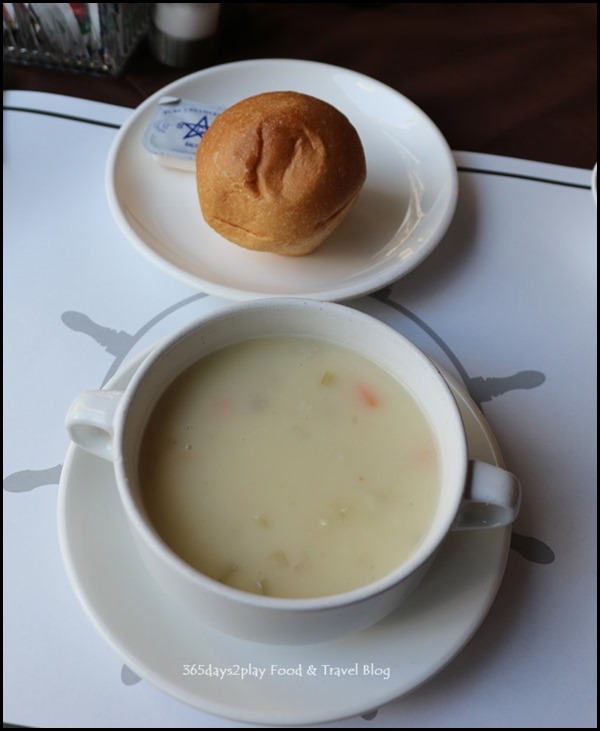 Since he didn’t take the fish soup, he was served the soup of the day which was cream of chicken and barley soup. I must say I don’t think I’ve ever come across such a combination before but it was a lovely soup, with lots of bite from the barley. 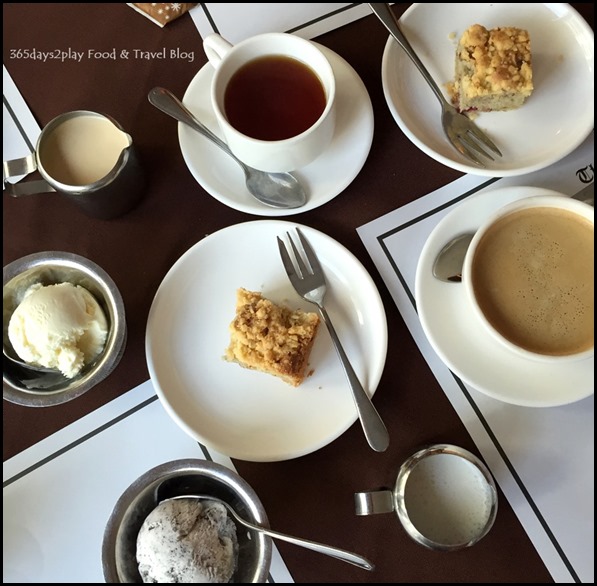 And last but not least, the desserts and drinks. I always go for the tea. The tea is just normal tea I believe, but I just love the sweetened evaporated milk on the side, of which I’ll add like almost half a jug into my tea. It tastes great!!! The cake of the day is nice too, but I almost always go for the ice cream. There’s always a fear that cheap/fake tasting ice cream is served at affordable establishments, but I’ve always enjoyed the ice cream served, down to the last scoop! 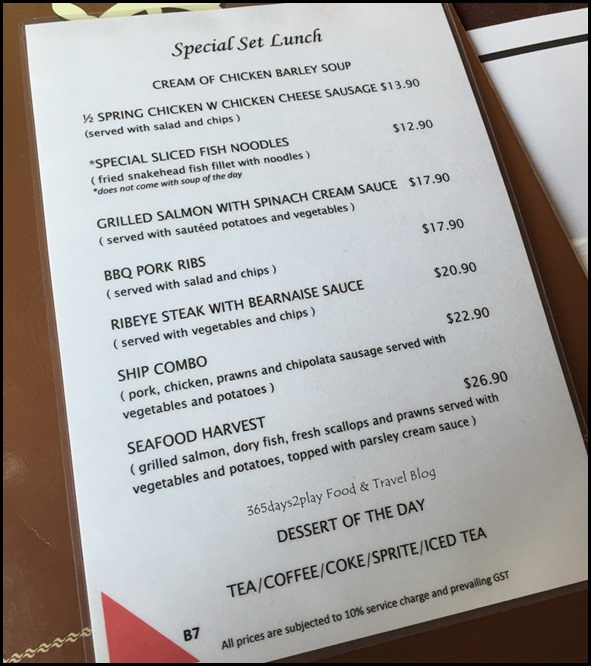 I went twice during the work week and once on the weekend and I’m glad to report that the special set lunch is available everyday! The set lunch looks really value-for-money, and comes with soup, dessert of the day and a drink. The only thing is, if you order the fish soup noodles, you don’t get the additional soup, which I think is fine because you’ll be almost bursting by the time you get to the end of the meal.

5 places to help you throw your dream Christmas party