You know I’ve written hundreds of articles on food, and I’ve barely written anything about Baby that it’s a little embarrassing. I’m going to dedicate this post to Edward as well as attempt to post more baby/toddler stuff. OK he turned 17 months a few days ago, but we still call him Baby. Of course right? 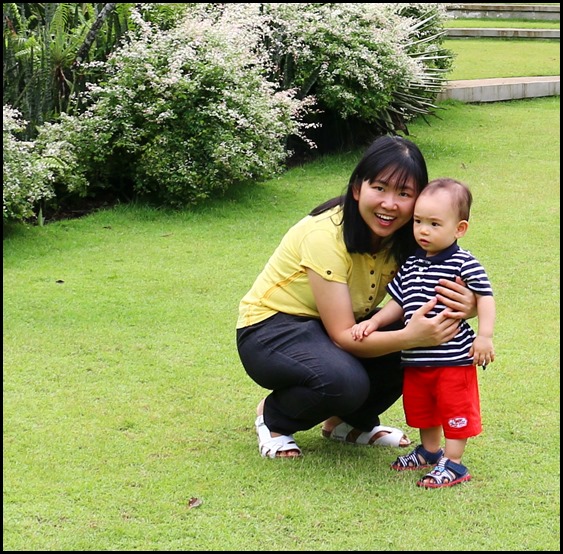 In no particular order, here are Edward’s 10 favourite activities or things.

We’ve been giving Edward crayons to try out since he was 6 months old (supervised of course), but it’s only in the last couple of months that he suddenly gained deep interest in them. He LOVES crayons! He loves to hold them, he loves chucking them out of the box, grabbing a few at a time and scattering them around. He will also make marks on the drawing paper, nothing fancy so far, just random scribbles. And even though he may have a few with him on the highchair, he still insists on getting hold of every crayon within sight.

Btw, I’ve tried 3 different types of crayons and so far the Faber Castell Jumbo Erasable crayons 12 in a box is the best in terms of saturation and being break-proof. It’s been a month and the crayons have all survived except for a green one that cracked after being thrown onto the edge of a table. Oh and the reason why I even have 3 different boxes is because my heart breaks a little each time a crayon is broken so I figured I need spares, lots of them….

2. WHAT TIME IS IT? WHEEL OF FORTUNE

Edward is super sensitive about the word ”time” and whenever he hears it, he starts clapping! This probably came about because the only TV programme we let him watch is Wheel of Fortune at 1pm and 7pm, and we’d ask him what time it is when nearing the appointed hour.

Speaking of Wheel of Fortune, that’s his favourite programme by far. We subscribe to the no tv time rule before age of 2 as much as we can, but we relent during meal times or times where we aren’t there to engage him to begin with. I’ve been missing out on my cooking programmes because I’ve had to air reruns of Wheel of Fortune on Youtube or risk a melt-down! He doesn’t seem to desire to watch any other programmes and we’ve left it as that since he’s not supposed to have that much TV in the first place.

He loves it when we talk about the time so we bought him his own clock!

The minute he hears these words, he chucks whatever he’s holding and zooms to fetch his shoes…It’s pretty hilarious looking actually. I gotta get this down on video one day.

See stairs, must climb. Up and down, many times. 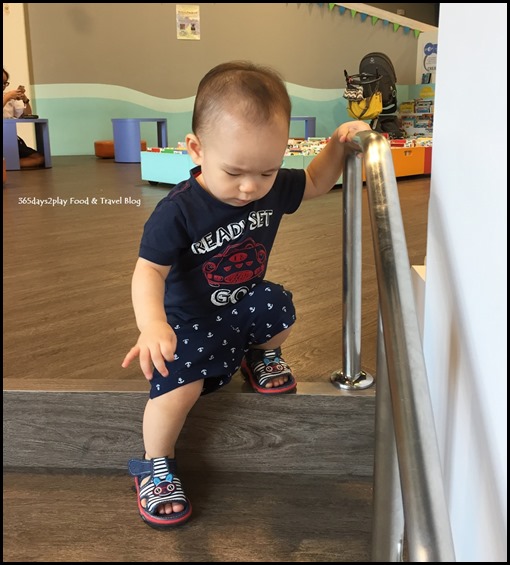 Edward loves going to the library. It used to be because he loved yanking out the books from the shelves (when he couldn’t walk unsupported), but these days he loves running all over the place and exploring everything. AND, there are some steps at the library, with handrails, so he goes up and down the steps on his own. Luckily the Pasir Ris Library has a huge Early Readers section which is good for boisterous children like him, although I’m not so sure if the steps are a safe thing to have there actually.

He loves books. He loves flipping books. He loves being read to. One of his favourites is actually from the Peter and Jane series, yes I kid you not (its a book for older children). Quite a boring book to read out loud repeatedly, you will know what I mean if you go read the book. But no doubt a very good book to learn how to read due to the repetitive words.

Without fail, he will point out the butterflies and flowers in the books or materials (like decals on the wall) that he comes across. And because nearly every children’s book has butterflies and flowers in them (as part of the background scene), the excited pointing happens a lot of the time. He loves dinosaurs too but these appear less often. I should probably go and improve my knowledge on butterflies so that I can differentiate amongst the species.

He will go all excited whenever he sees the above during our walks. Apart from once where I let him go near a pet dog at a playground (and then worried about all the germs), sadly he hasn’t had any up-close and personal encounter with them. When we were back in NZ in February, the cat was away most of the time and anyway he was too young then. Got to bring him to the Jurong Bird Park where they have the free-roaming birds which will perch on your arm when you feed them. Or can someone lend me their cat?

Edward absolutely loves bread. We don’t allow him to have any sweet bread spread, so we literally have to hide when eating bread, if we don’t want him to have any. He loves the crust in particular too! Oh and these Quinoa and Kamut puffs from the health store are great to keep him entertained. It’s pure quinoa or kamut in breakfast cereal puff form, with no sugar or any other ingredients added, so I figured it’s the healthiest snack to give him, apart from fruit. Good training for the pincer grip too, in his younger days.

Yes, still breastfeeding the 17th month old baby. It’s a good thing I am a SAHM. Or maybe it’s because I am a SAHM. Before he turned 1, he was actually indifferent between the bottle and the breast. These days he rejects the bottle and in fact the cup as well. It’s a headache trying to get liquids into him.

Bonus point here hahaha. I thought I was done with the list when I remembered that Edward loves playing with water! It’s a no brainer that he loves bath time, and on average stays in his bath to play for at least 1/2 hr (supervised of course). He also loves watering the plants! I try to do most of the watering, because if he gets hold of the jug, the water goes onto the floor instead. As long as his hand touches part of the jug, he thinks he’s helping and that satisfies him! And he loves pouring water out of buckets, out of mugs etc.

And that’s why all the plants died of thirst…

What do other 17th month old toddlers out there like?