One of the most memorable meals in Taiwan was when we went to try out this Steamboat/Hotpot restaurant near the Shilin MRT station. Seriously, I’m not really a big fan of steamboat. The steamboat restaurants I have tried in Singapore are all similar styled. You order slices of meat, you cook the meat in your chosen soup, you eat. Really, there’s nothing  differentiating the various steamboat/hot pot restaurants, except perhaps for the soups themselves, and even then, that’s just one aspect. If I had to choose a favourite in Singapore, it would have to be JPot, because at least some of their meats are marinated or prepared in a slightly more appetising way.

So, when the dishes started arriving at Quan, I was seriously completely bowled over. Really amazed at their creations. This is one blog review where the pictures will do more to describe the situation than what I could ever pen down in words. 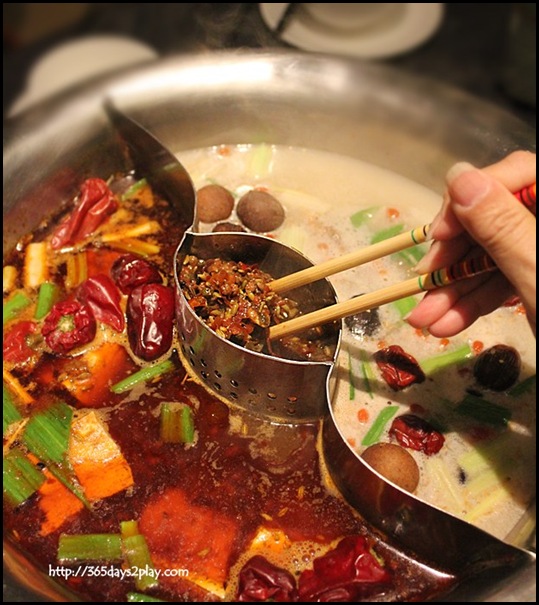 First up, the hotpot POT itself. A humongous metal tureen sized pot divided into 2 portions for the 2 soups, plus a middle portion to hold the chilli spices. The pot itself is specially designed such that you won’t burn yourself if you touch the sides. A live fire instead of a hot plate is used too. Sometimes slow is better than instant gratification.

We weren’t given a choice, but a word of warning for anyone who dares to take the Sichuan Style Spicy Soup. You might not be able to feel your tongue after eating that soup. Living in Singapore, it’s inevitable that you might encounter spicy food that is too spicy for you to tolerate. Your tongue burns for a while. The usual scenario.

A very interesting thing happened to me whenever I bit into any of the items fished from the Sichuan soup section. My tongue just started to buzz and tingle! I’ve never ever experienced such a thing before. It didn’t feel painful but it was really weird! In any case, authentic Ma La is not meant to be simply spicy. Pure spiciness is easy to achieve, just dump in a truckload of chillies! You will be able to detect nuances in the flavours in a good Ma La. 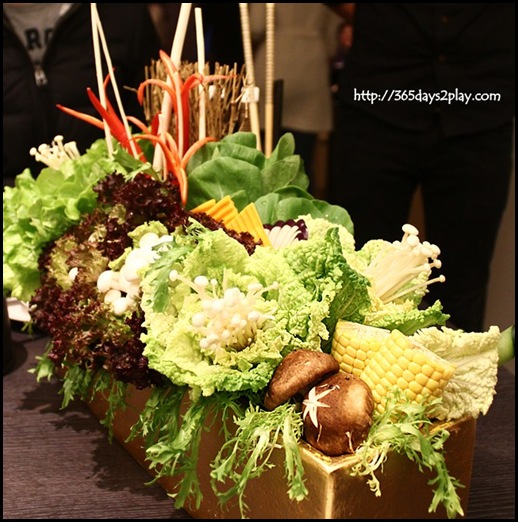 This appeared soon after our soup appeared.You wouldn’t be faulted for thinking that this is part of the restaurant’s flower decorations. How innovative is this? Vegetables dressed to look like a garden shop display. 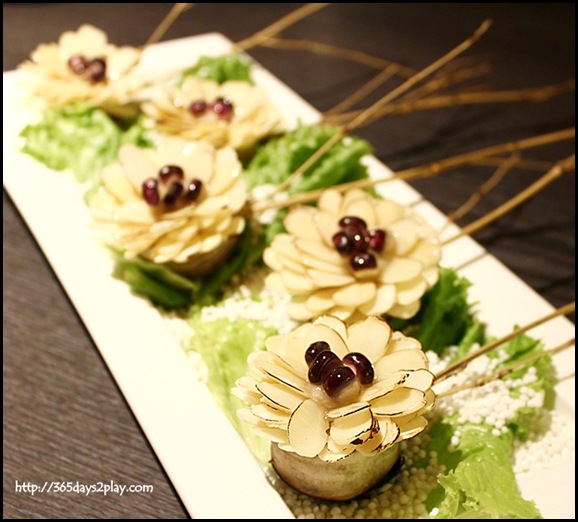 This is actually seafood wrapped in eggplant for the bottom bit, and almond flakes for the ”flower bit”. Simply exquisite and delicious. 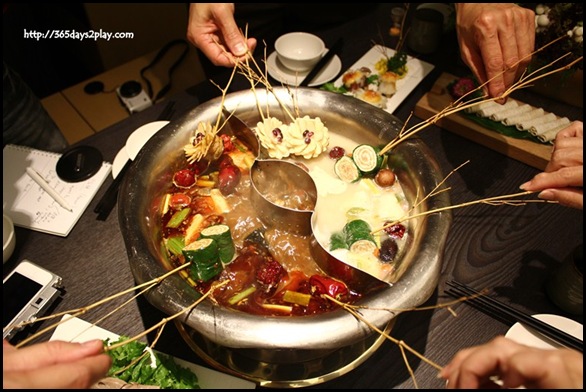 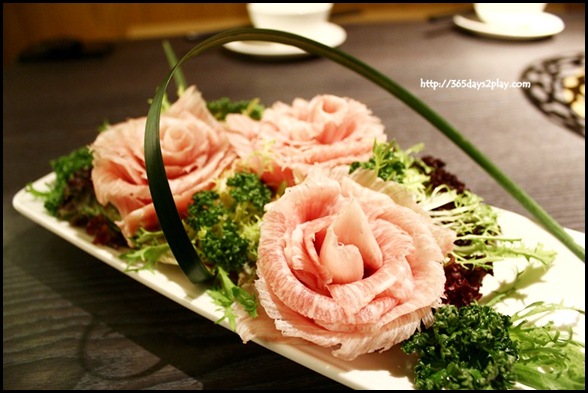 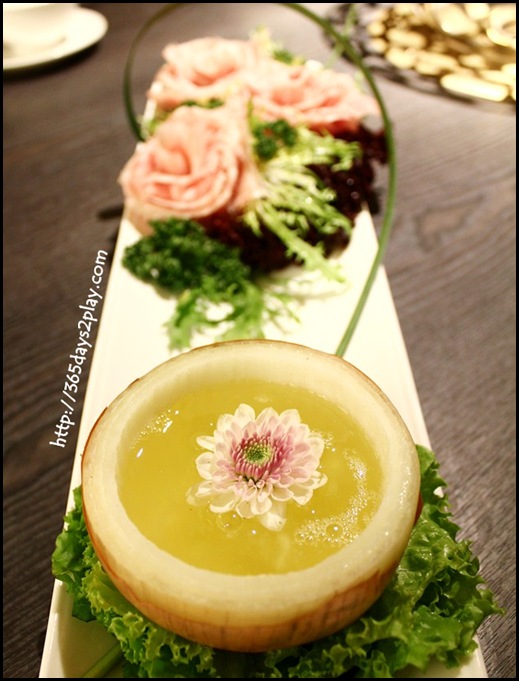 This was one of my favourite dishes. The pork is sliced so exquisitely to resemble a pink rose. Look at the marbling on the meat, rendering a heavenly melt in the mouth texture. The liquid in the melon isn’t a soup of sorts but egg white. We were told to dip the pork slivers into the egg white for an even smoother taste! I had no idea that that dipping meats into egg white would render them more tasty, but it worked!

You may also have noticed that no sauces were provided for all the dishes. This is intentional as you are expected to savour the flavours of the food and not have them slathered in thick sauce! 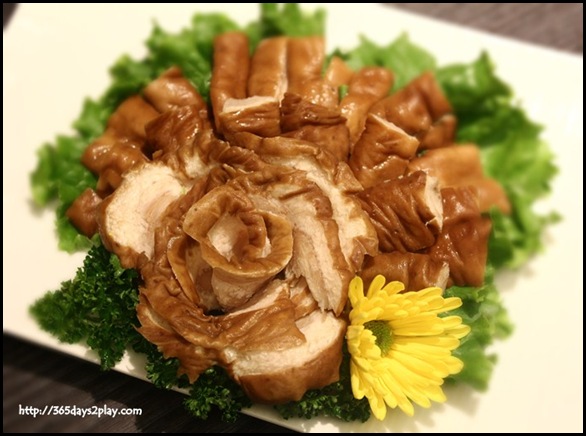 Large intestines also sliced to resemble a flower of sorts. Because of the way that the intestines have been sliced, the texture is slightly different! 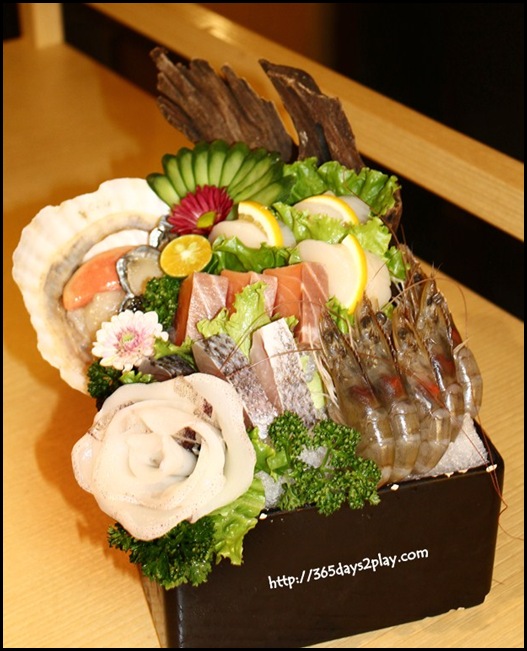 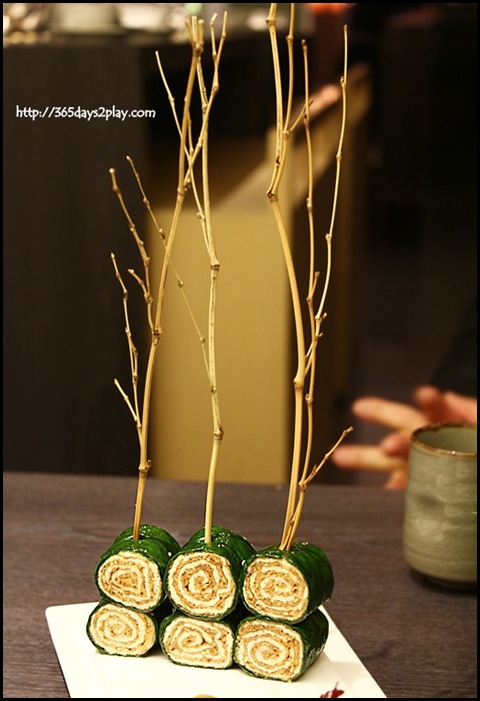 If I had to choose a dish, this would be my most favourite dish of the evening. It’s made of simple ingredients, yet the presentation makes it far more exciting than you could ever imagine spinach and sesame seeds could ever be. Basically, tofu skin is rolled in sesame seeds and wrapped with spinach on the outside. The resulting texture is quite interesting. You have a taut exterior which gives way to semi-firm beancurd skin, with a bit of a bite coming from the sesame seeds. You feel like you are biting into a piece of meaty flesh. I like how they’ve also stuck the twigs into the spinach wrap for a forested look. 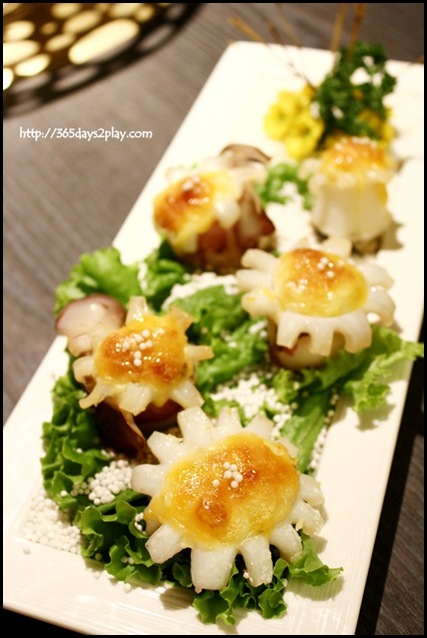 So so dish when compared to the previous few. Octopus didn’t have much of a taste, and the sliced cheese didn’t add much to lifting the flavours.

These are the wanton of shrimp. Yes, these are wantons, wrapped in a special way. Apparently too many folds when wrapping a wanton or Xiao Long Bao isn’t that great a thing as each fold adds an additional undesirable thickness to the texture. 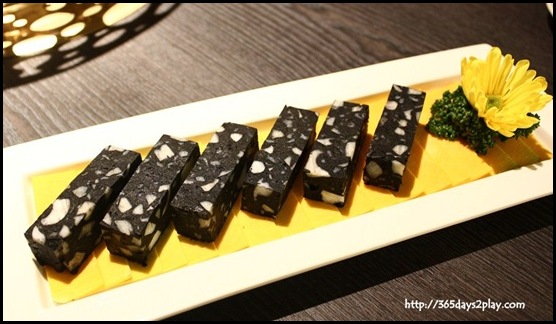 And finally, nougat of octopus. It is of course only shaped like a nougat. Tastewise, it is more of a compacted block shaped fishcake/seafood cake. If you observe closely, there are 3 elements to this nougat. The black colour is the result of adding squid ink. Chicken cartilege is added for a springy texture, and of course, the octopus bits themselves. 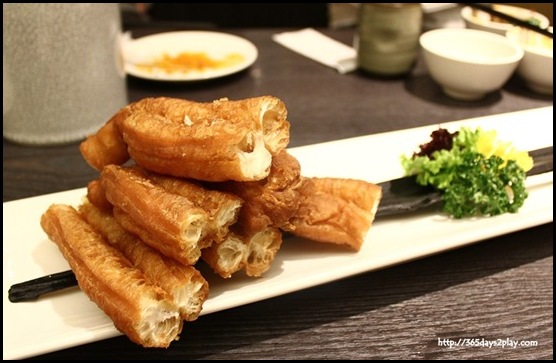 Oh wait, this was the last dish, because this was ordered just when I thought I could relax again. These you tiao aka dough fritters were fried FOUR times so as to get the resulting hard and crispy texture. Apparently this is so that the dough fritters can better absorb the Mala soup stock. If you are not accustomed to such spiciness, I would highly recommend that you do not use the you tiao to soak up the soup or you will surely regret it, as I did. Do its job well, it did, I have to admit. 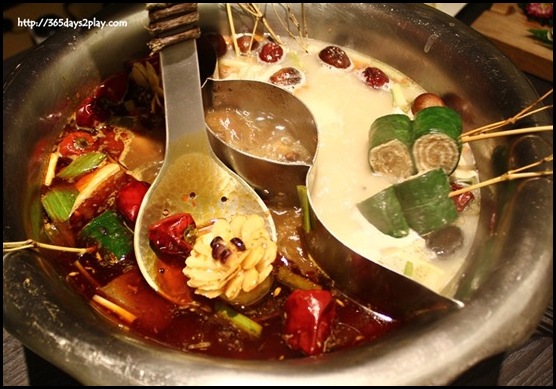 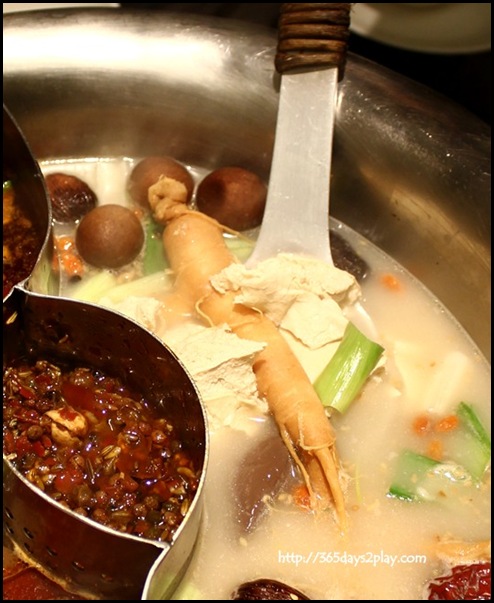 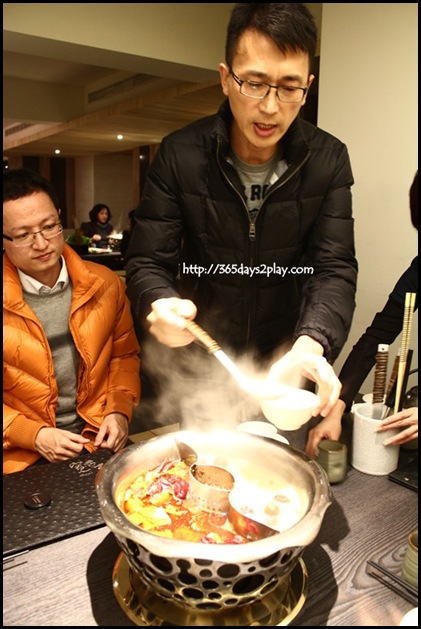 As I was saying, every aspect of the dining experience is carefully deliberated and tailored. As you can see, the pot is specially made so that you won’t hurt yourself if you touch it. The lighting is so angled, such that it enhances the steaminess of the hot pot. In the heart of winter, would not a steaming hot pot beckon to you if you were so passing by? 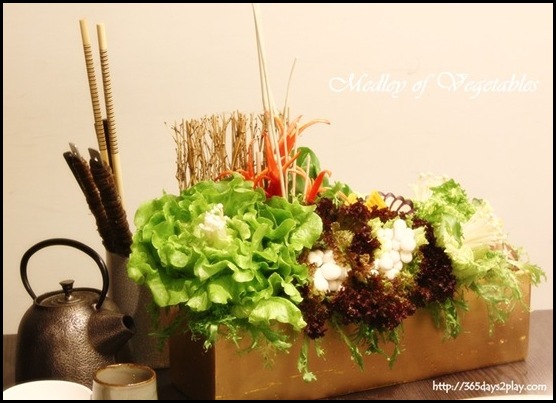 Even the exquisite food displays could not have been done by any mere kitchen help. Many of the staff were sent to France to learn the art of food decoration. We were told that it takes hours to assemble the vegetable tray. 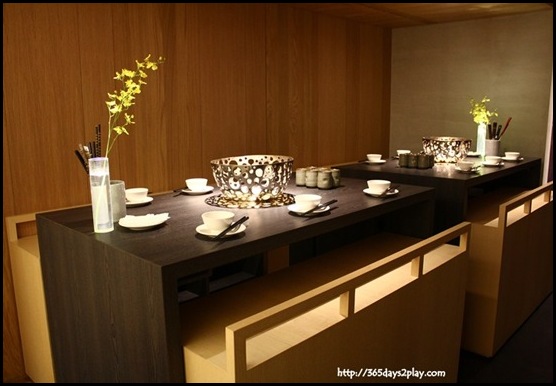 So, the big question, WHY? Why go to such an extent for a traditional dining experience like hotpot? It appears the owners have been in the hot pot business for a very long time, and they wanted a fine dining hot pot experience. There’s only so much you can do to increase the quality or value of the ingredients, and that’s when they realised the magic formula of impressing the customers through the skilled use of food styling.

For those wanting to impress your business clients, Quan is a good place to consider!!! 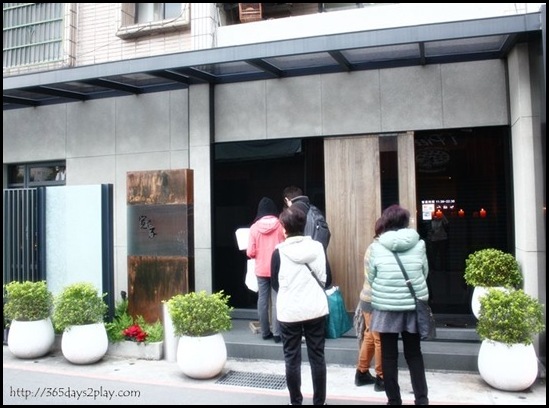 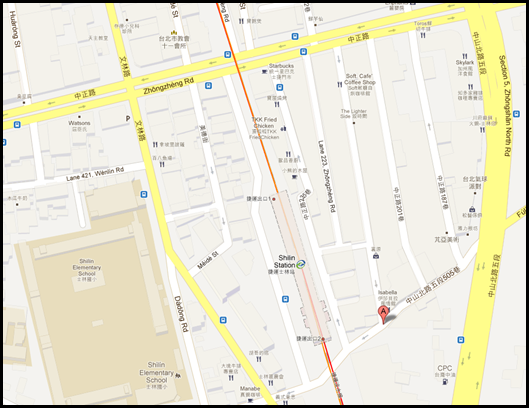