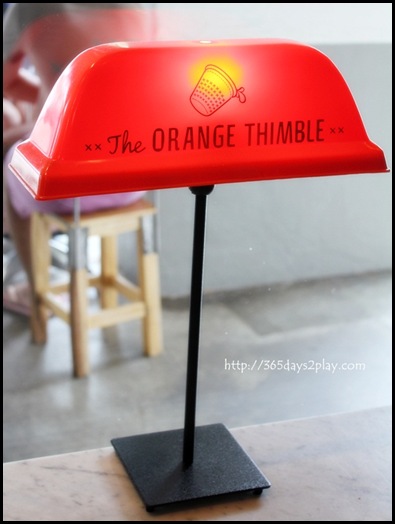 Over the Chinese New Year period, my parents, the Partner and I decided to stop off at a cafe to have a cuppa. We aren’t coffee addicts, but somehow, the idea of having a cuppa just puts a smile on our faces. The only thing is, where on earth to find a cafe that’s open during Chinese New Year? I was stubbornly hopeful and drove past the Everton and Tanjong Pagar/Bukit Pasoh area hoping to spy some welcoming light from the otherwise darkened shophouses. No such luck. 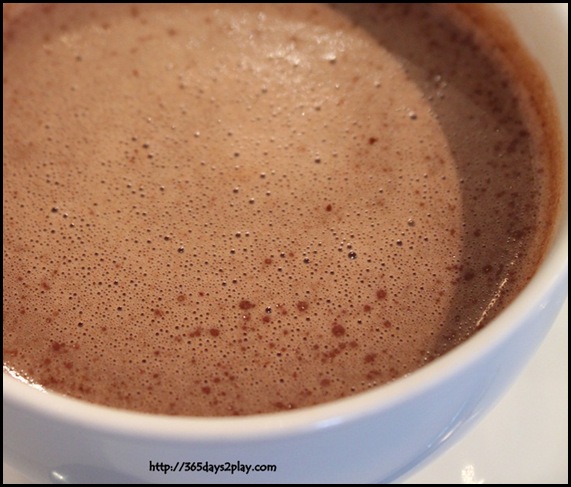 Although I always set off thinking that I will have a coffee, very often, I suddenly switch to hot chocolate instead. I’m not a coffee addict, but I AM a hot chocolate/ice chocolate addict. It’s what I really want to drink, even if I think a hot chocolate is easily replicatable at home. Complicating huh.

The hot chocolate from The Orange Thimble is FANTASTIC! It’s one of the best hot chocolates I’ve had in a very long time! The hot chocolate is extremely rich, thick and yet not overly sweet. There a bit of a fluffy texture, like little chocolate clouds floating in the drink. I really love this hot chocolate. If anything, it’s a bit on the pricey side at $7. 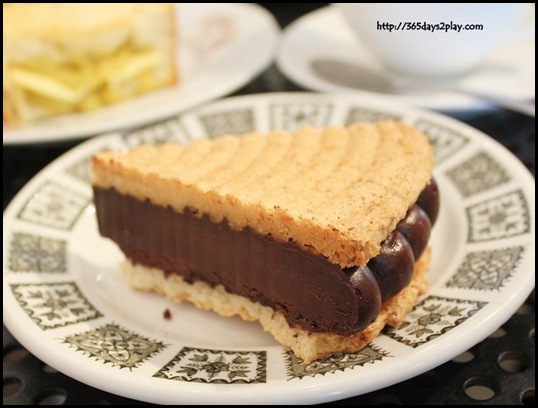 I don’t think I’ve ever had a chocolate dacquoise before. It looks like a huge wad of chocolate sandwiched between two thin slices of biscuit. A dacquoise is traditionally a cake with layers of almond and hazelnut meringue but in this case, the dacquoise refers to the baked crispy nut meringue that now looks like a biscuit.

Obviously, the chocolate just drew me to this cake. But I was a little disappointed that it didn’t taste as nice as I expected. I suppose I was expecting a sort of Nutella flavour, but it wasn’t Nutella-like at all. And it isn’t as chocolately as it looks either, although it is rather chocolatey. I mean it’s definitely not like eating chocolate out of a jar. Interestingly, my mother liked it very much. As it was not so sweet, my mother enjoyed it a lot. I do wonder if a more bready or cakey base and top would have been a better match. There was just too little biscuit to go with the huge amount of chocolate. 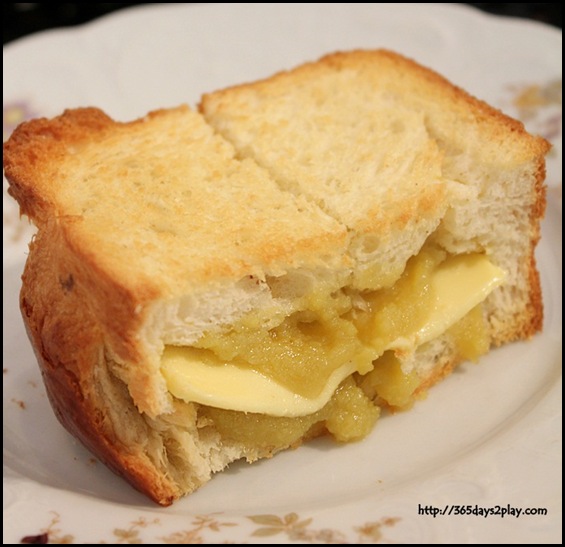 Was pleasantly surprised to find Kaya Toast on the menu. It’s only $2 plus which is great, because sometimes you only want a little something to munch on, and not a whole gargantuan cake slice. The flip side is that the kaya toast is obviously more expensive than what you would get from Yakun or ToastBox.

Tastewise, I liked the bioche like texture of the bread, it being slightly soft and fluffy. The kaya wasn’t really that fragrant, and there was too much butter, but on the whole, still pretty palatable. 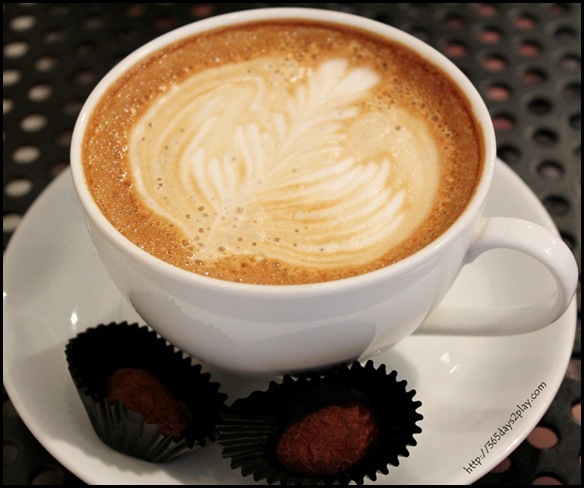 My father had his usual cup of cafe latte. 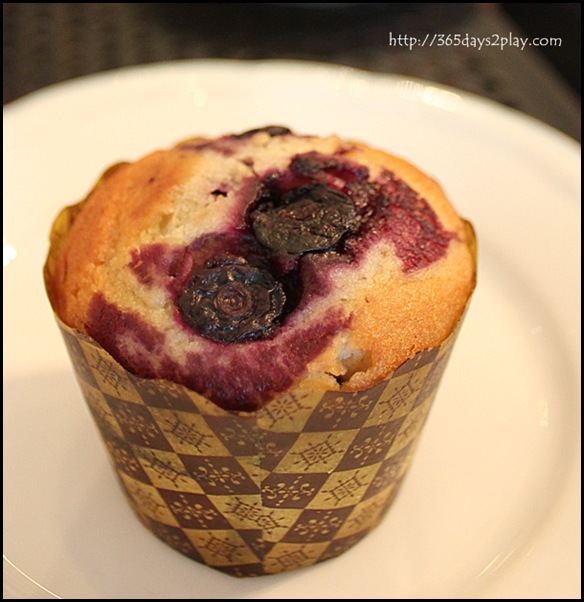 The Partner said he wouldn’t have anything, but succumbed and ordered this blueberry muffin. He really loves his berries, while I love my chocolate. 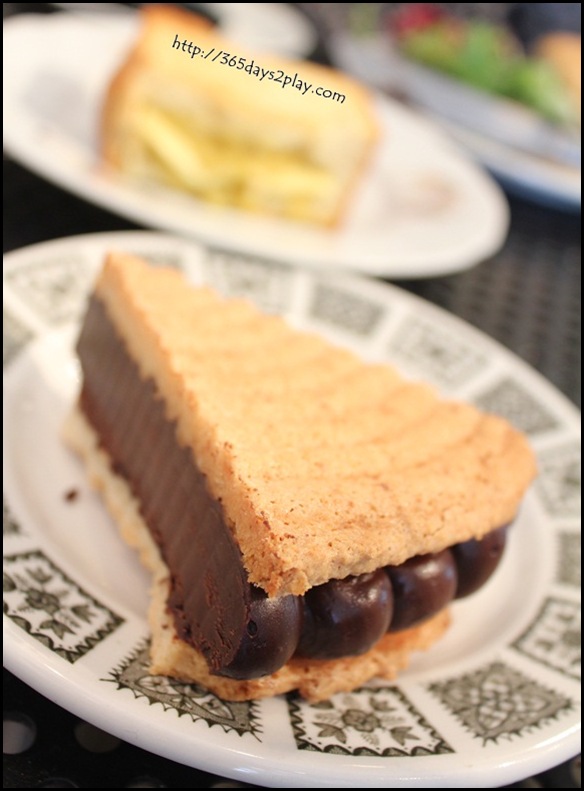 Another closer look at the chocolate dacquoise 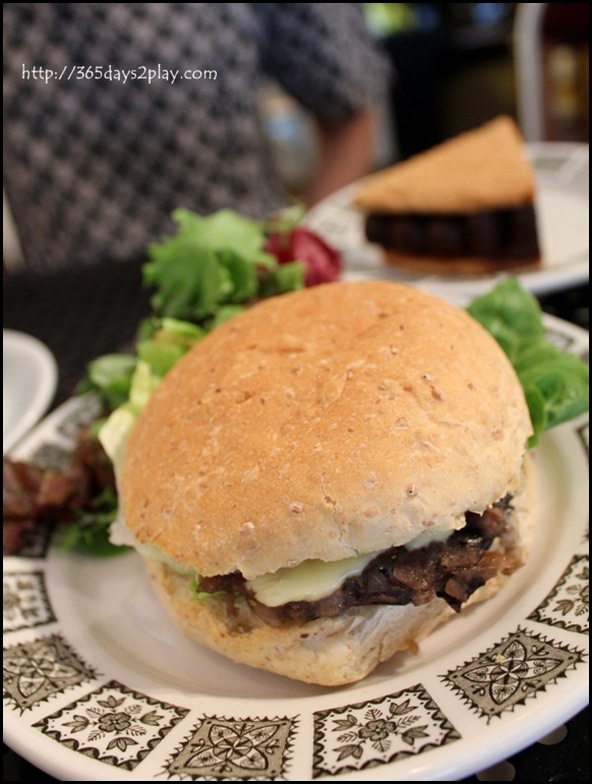 There are a few burgers, sandwiches and stew on the menu too. My father ordered this. I didn’t eat any so I’m not able to comment. The pricing is pretty friendly, when you compare this with the cake or the hot chocolate pricing. Might come back for the burgers the next time round. Their breakfast menu looks very affordable too! Think the ”all-day-breakfast” costs only $12.

And the great thing about The Orange Thimble is they don’t charge service charge or GST. So the prices now look even better! 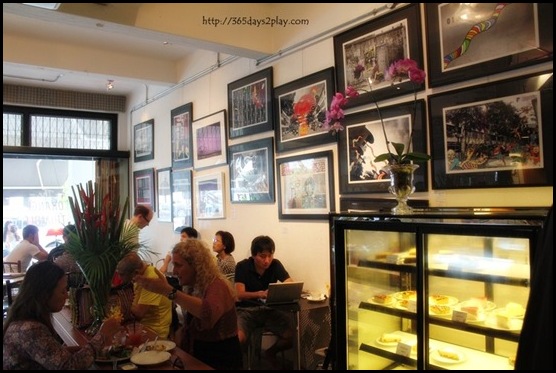 Lots of artsy photographs hanging on the wall 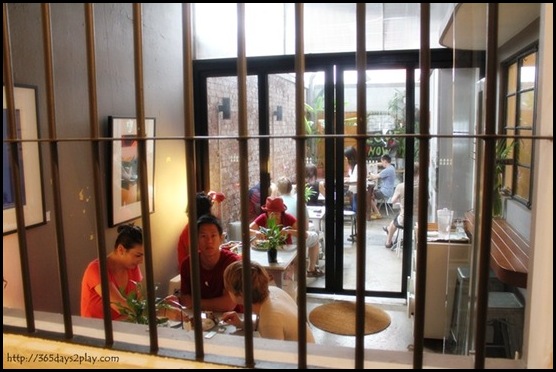 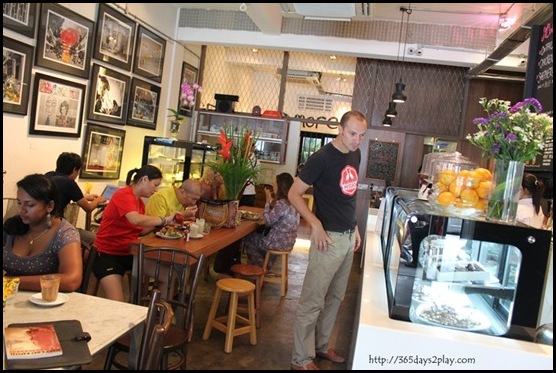 Check out the egg cartons on the wall near the ceiling. I bet The Orange Thimble got these from their egg seller neighbour when they first open. I know because I was there last year and the egg shop was still there. The egg shop is not there anymore. Wanna guess who’s next door? Take a guess. I’ll put the answer at the end of this blog. 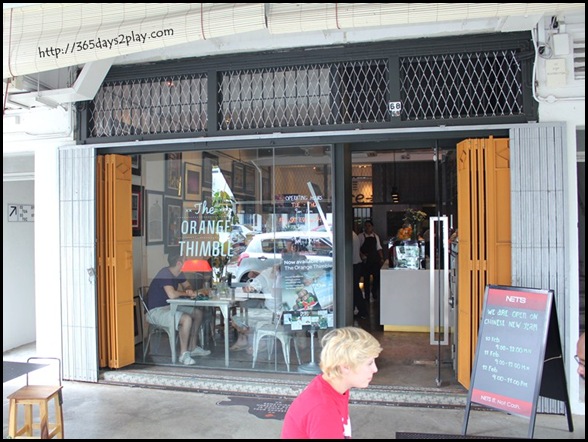 Read about other great cafes by clicking here. 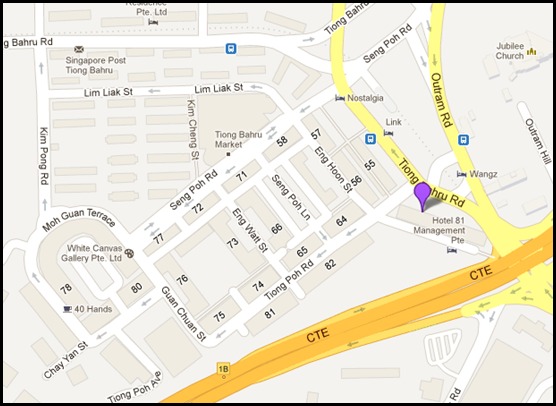 Pssst : Tiong Bahru Bakery took over the egg shop and is now The Orange Thimble’s neighbour.