Having had a good time at Black Earth 2 months back, we decided to revisit again to try out more of their menu selections. I really wanted to try their Pan-Seared Lamb Rack, which the Partner ordered previously and enjoyed tremendously.

Alas, there was no Lamb Rack to be had since the next shipment was stuck somewhere overseas. So once again, I decided to order from the Seafood Creamed Pasta from the ala-carte menu, while the Partner tried the Sirloin Steak with Honey Mustard Sauce from the set-menu.

It was our lucky day when the waitress offered us some wine to sample. I thought it would be just a small amount, but it turned out to be 1 full glass of red wine and white wine! The red wine was nice, and went well with the sirloin steak that the Partner ordered. I didn’t like the white wine although the Partner thought it was okay. But anyway, what do I know about wine. I just drink and enjoy. None of that sniffing and swirling thing for me thank you. 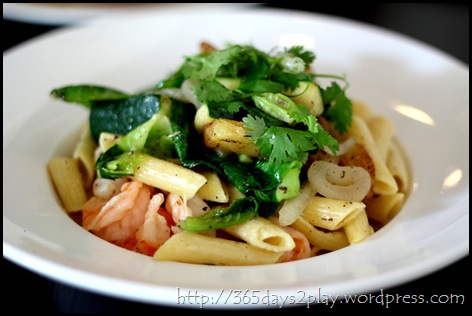 At Black Earth, they allow you to choose your desired pasta type (penne, fettuccine), sauce (cream, tomato, basil) and meat (seafood, chicken etc). So I chose creamed fettucine with seafood. It was a bit hilarious when I realised only half-way through the dish that I’d been served penne pasta instead of fettuccine! While I generally prefer cream sauce, most places overdose on the cream, which results in you feeling sickly full halfway through the meal. This pasta here on the contrary had a very light touch to the cream. As you can see from the picture, you can barely notice any cream, except for the whitish sheen if you scrutinise closely. 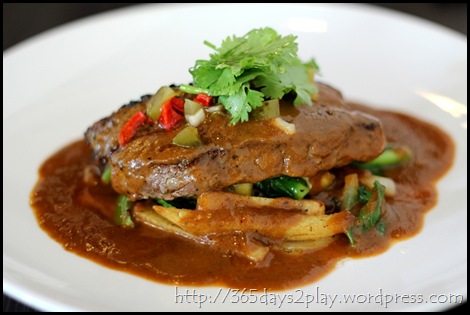 The Partner liked the Sirloin Steak very much. As with the Lamb Rack he ordered previously, the sauce was really flavourful and just brightened the dish tremendously. There was also another hilarious episode with the Sirloin Steak. The Partner had originally ordered it to be cooked medium rare. However, he was served a Well-Done steak. The waitress remembered our order correctly, so she removed the steak and went to the kitchen to check. Less than 1 minute later, the Partner was served a new piece of steak.

Wow, were we served someone else’s steak by mistake? How could the new steak have taken only 1 minute to cook? But the even more amazing part was that we were the last customers there, having arrived pretty late for lunch. Who was the mysterious steak supposed to be served to? Anyway, it was an acceptable doneness for the Partner, so that was that.

Or so we thought, until when 5 minutes later, a 3rd steak was served to us! The Chef, clearly a perfectionist, must have felt that the 2nd steak was medium rather than medium rare, and so prepared a 3rd one. That is so weird! But we were heartened by the efforts of the chef so the 2nd steak was returned and the 3rd one received. 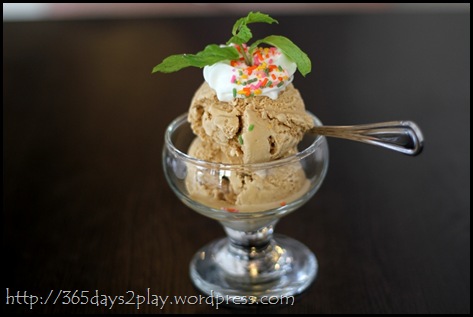 Coffee ice-cream to end off an interesting meal.

Click here to read the review of my 1st visit to Black Earth Restaurant. 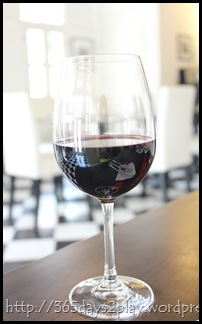