Recently the Partner wanted to have his cake and eat it, so we drove down Tanjong Katong Road to try our luck. There are quite a number of eateries along Tanjong Katong Road, but they’re mostly full-fledged eateries or for some inexplicable reason, ice-cream shops. Now if you’re hankering after ice-cream, you have to come to Tanjong Katong Road because there are at least 3 ice-cream cafes to choose from in that short stretch!

I used to think that the East was lacking in coffee hangout places, but I’m glad to report back that the situation is slowly changing. It’s still not as good as what I would like it to be (think Duxton Hill, Tiong Bahru etc), but the East is slowly heating up! The amazing thing about Tanjong Katong Road is that every time I drive past, I spy yet another new eatery! I’m hoping for the day when Tanjong Katong Road becomes the Holland V or Duxton Hill of the East! 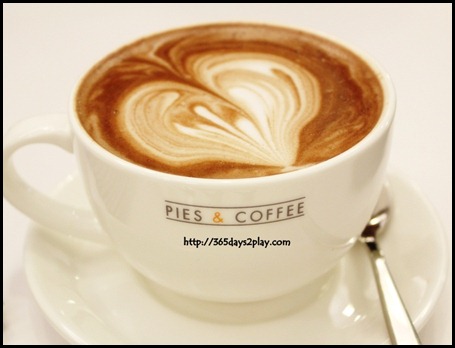 This time round, I was in luck, cuz I spied TWO new cafes sited near to each other. We checked out Pies and Coffee since the other one seemed to have run out of cakes. If Pies and Coffee sounds familiar, that’s because they have another outlet in Rochester Mall, opened in 2011. I haven’t been to the Rochester Mall outlet, but from the pictures, it seems the Tanjong Katong outlet is much smaller, fitting about 6 tables indoors, and 4 al-fresco.

I have heard that their pies are pretty good. Wouldn’t it be funny if they weren’t? Anyway, we were there for desserts and coffee so this is what we had. 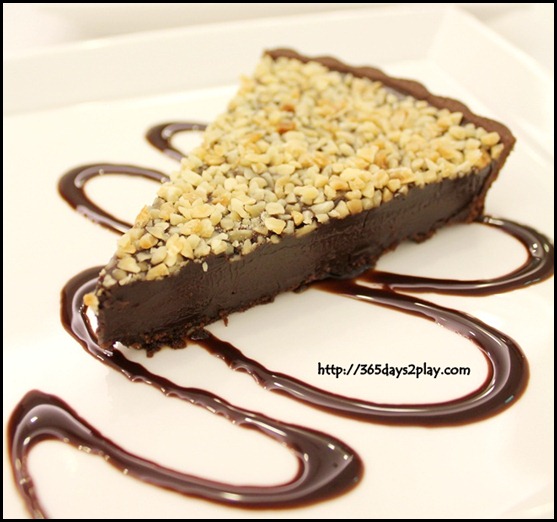 Luscious chocolate cake or chocolate almond tart? In the end I went for the Chocolate Almond Tart as I wanted to compare it with my favourite chocolate tart from 40Hands in Tiong Bahru.

I have to say, the 40Hands chocolate tart still is the best chocolate tart I have ever tasted. It’s way smaller, only about the size of your palm. but the chocolate is much thicker and firmer, resulting in a much richer taste and texture in the mouth. The tart case enveloping the chocolate is also more buttery. So even though it’s small and costs $9, it’s worth every penny.

The Chocolate Almond Tart from Pies and Coffee is very good too. In terms of texture, the chocolate is slightly softer but the added almonds makes up for it. Have you tried the Chocolate Mendiant from Tiong Bahru Bakery? The texture is similar, but the Mendiant is slightly richer and sweeter. In terms of size, this tart wins hands down as 3 people were able to share it without quarrelling. In totality, because the Chocolate Almond Tart is bigger, you still feel like you’ve had a rich and sinful treat. 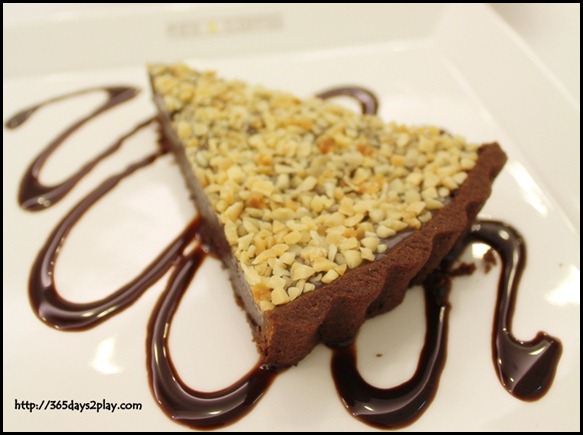 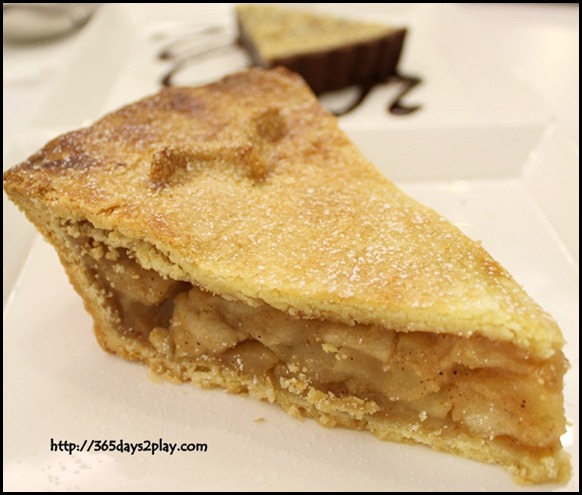 Huge slice of apple pie for, although it didn’t come with an accompanying ice cream. The apples were cubed roughly and still retained a nice bite to it. It was pleasant to know that cinnamon had been added to the filling as cinnamon is not always present in apple pies in Singapore. It’s quite strange, because apple and cinnamon just go so well together. In New Zealand, you would find it very difficult to find an apple pie that didn’t come with cinnamon. However, to be truly perfect, sultanas should have been added to the filling for an extra level of sweetness. Cloves too, for the musky flavour would have been appreciated. 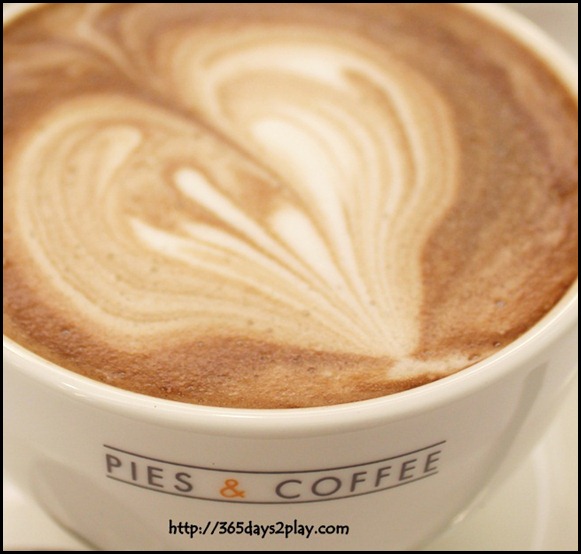 A nice comforting cup of hot chocolate that wasn’t overly sweet or rich. Would have been better to be served piping hot though. 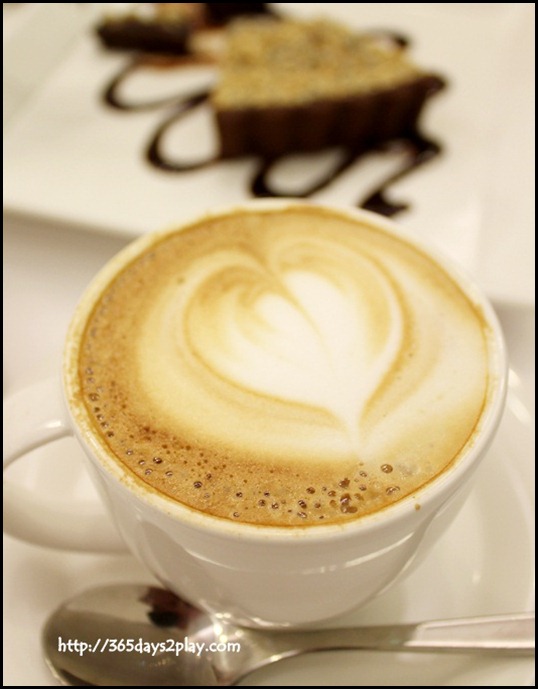 Flat white also tasted quite good. It was smooth and had a strong flavour without being too bitter. As with the hot chocolate, this was served warm for some reason.

Didn’t try these cake but here are the pictures… 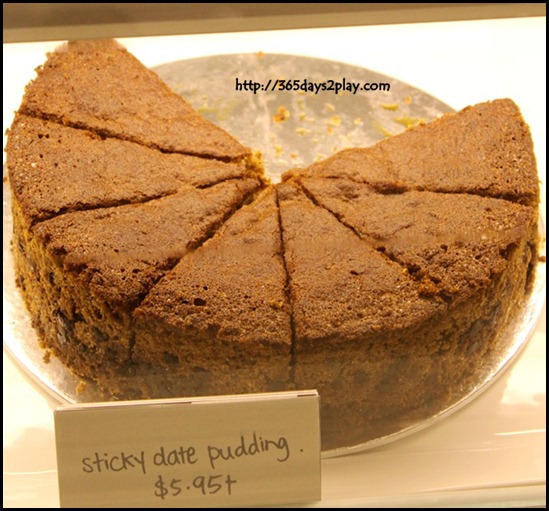 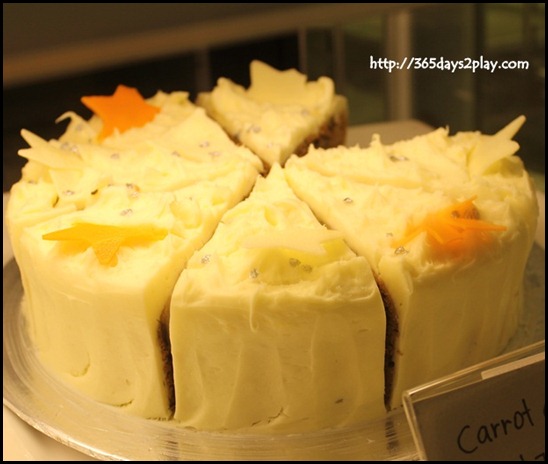 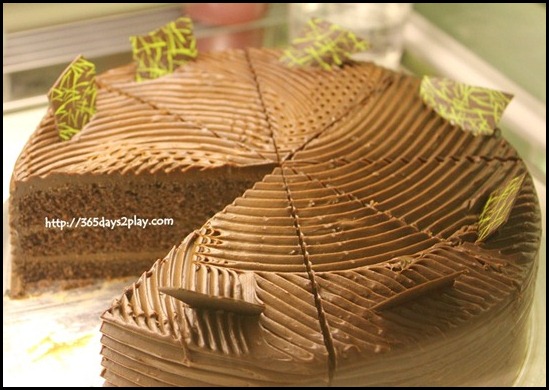 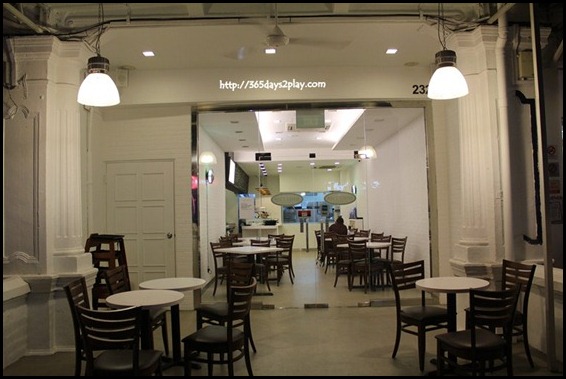 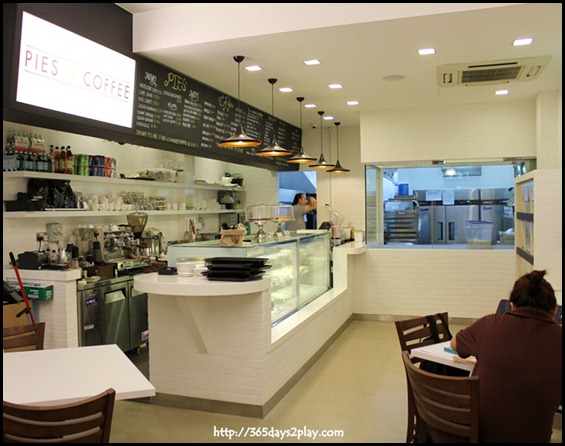 On the whole, Pies and Coffee is a nice place to grab a cuppa and a cake if you’re in the vicinity, although I think the cakes are a little on the expensive side. The place also looks too stark white, a little decoration in the form of hanging pictures or something would help to make the place more inviting.