If you’re planning to visit South Korea, and Seoul in particular, you have to spare some time to visit the Korean Demilitarized Zone (DMZ). It is the only way you can step on to North Korean soil, in relative safety so to speak. Of my entire 8 day trip to Seoul, this was undoubtedly the highlight of the holiday. If you’ve never been to the DMZ before, I highly recommend cutting down on the shopping and pigging out that you undoubtedly plan to do, and take some time to visit this historic and surreal place! 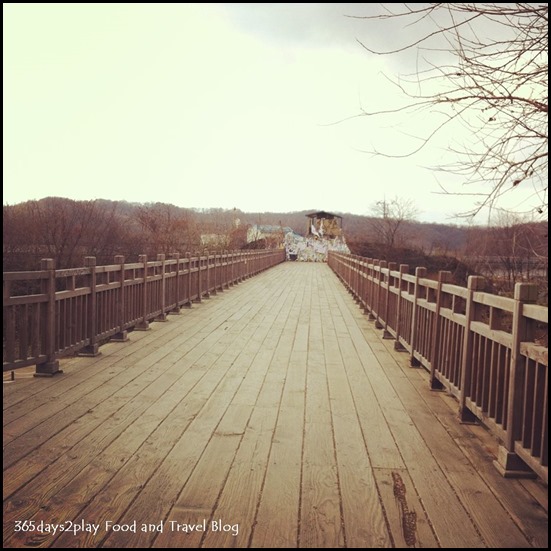 Freedom Bridge at Imjingak – It is a former railroad bridge which was used by repatriated POWs/soldiers returning from the north.

South Koreans are not allowed to visit the DMZ, so if you are a South Korean, you can consider being a tour guide, it’s probably the only way, apart from being a soldier! In fact, tourists have to sign up in advance with licenced tour agencies. Security is extremely tight and no one is allowed to veer away from the tour group once you are inside the Demilitarized Zone.

We signed up with KTB tours, taking note that they had English speaking guides. The tour we signed up for was for a full day tour, however there are half day tours as well. Ours included a trip to the War Memorial of Korea, Imjingak where the Freedom Bridge is, lunch, entry into the demilitarized zone (DMZ), and the highlight of it all, entry into the Joint Security Area (JSA aka Panmunjeom) which is where you can step on to North Korean soil. The entire trip took about 8 hours. 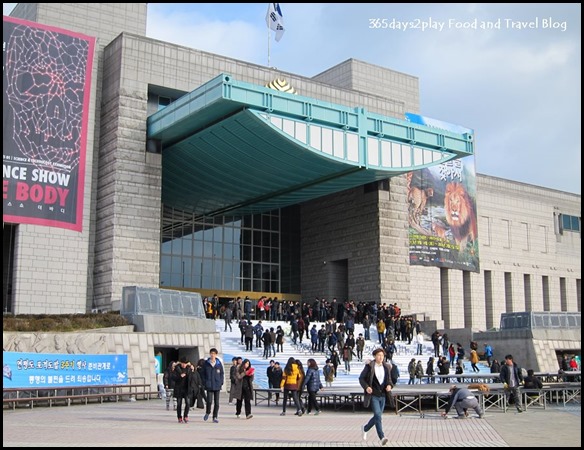 Our first stop was to the War Memorial of Korea. We were led on a quick tour through the Korean War exhibits so as to give us a better understanding of why North Korea and South Korea are divided to begin with. Actually, this was a pretty useless visit given that we had about only 45 minutes in the Museum. It’s far better to read up on your own first, or visit the museum at your own time. The museum itself has many fascinating exhibits, don’t get me wrong, but it was just too short a visit. 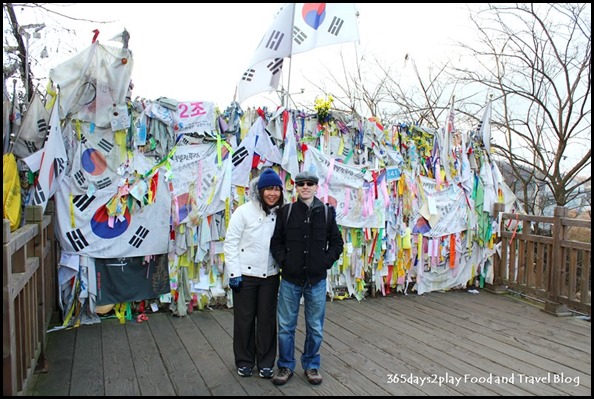 Next, we were brought to Imjingak, which is a park located on the banks of the Imjin river in the city of Paju, South Korea and just outside the DMZ. We were told by the tour guide that this park was built for the people who have lost family and friends due to the division of North and South Korea. Not exactly sure how coming to this place would console anyone, but it sure is steeped in history. The highlight of coming to Imjingak was to visit the Freedom Bridge.

As mentioned above, the Freedom Bridge is a former railroad bridge which was used by repatriated POWs/soldiers returning from the north. 12,773 prisoners of the Korean war crossed the bridge looking forward to freedom on 27 July 1953. Because it is still outside the DMZ, tourists can visit this area without having to go through any security check points. 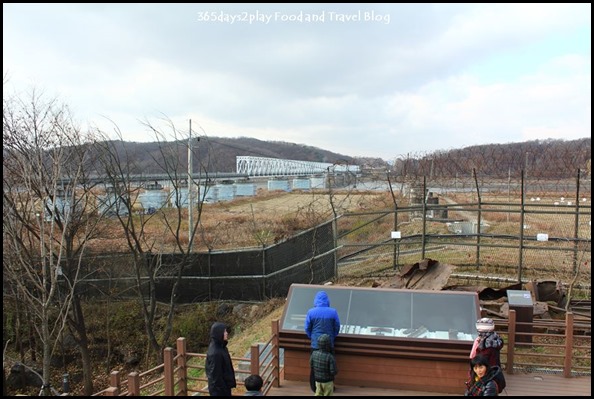 The new railroad is what you can see on the left of this picture. There was a old bridge too, you can just see the supports on the right of the picture. 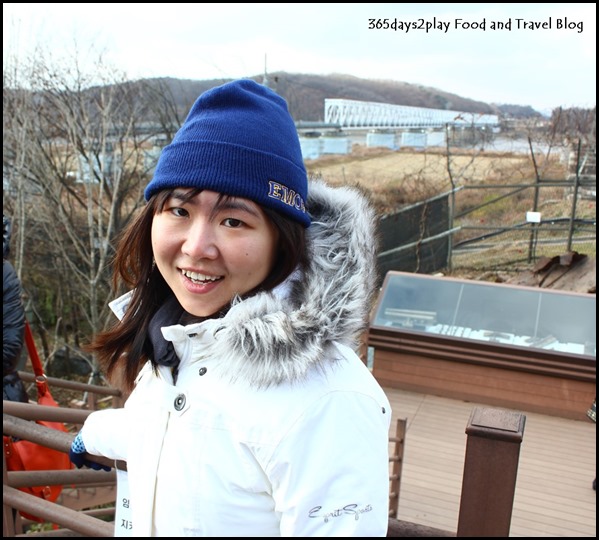 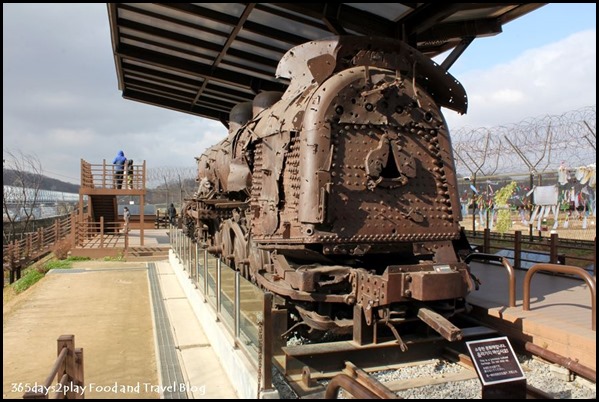 What is left of one of the old trains, riddled with bullet holes. 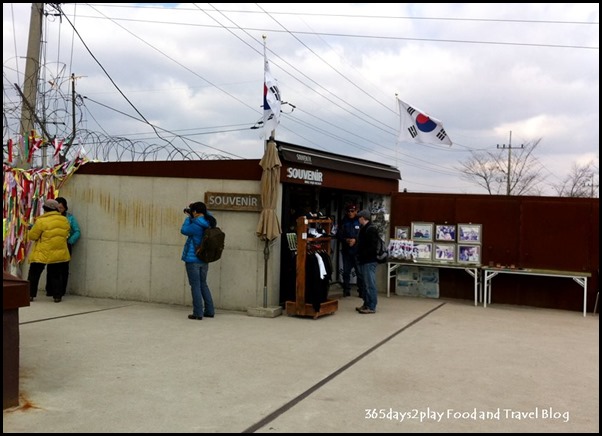 There is a small souvenir shop next to the bridge. We heard you can get your passport stamped with a North Korean entry chop but we didn’t check it out. Actually, the souvenir shop at the demilitarized zone is far larger! We bought all our souvenirs there, including things like North Korean money! Can’t tell if it’s real though. 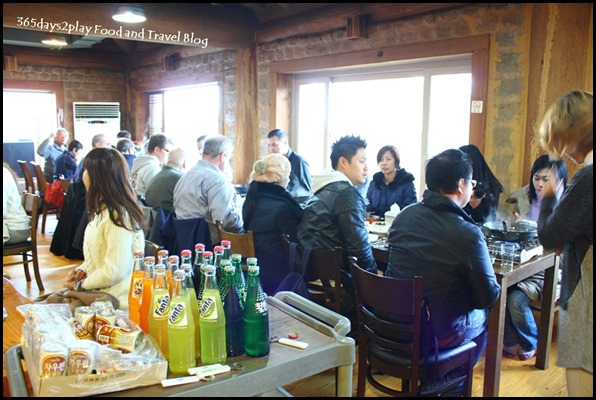 We had a 1 hour stop for lunch at a local restaurant. The food was really good! Everyone has to take the Beef Bulgogi hot pot, no choice about that. Although I did see that a group of Muslim students who were also on the tour had been given vegetarian Bi Bim Bap instead. Between beef bulgogi and vegetarian bi bim bap, I think the choice is clear. 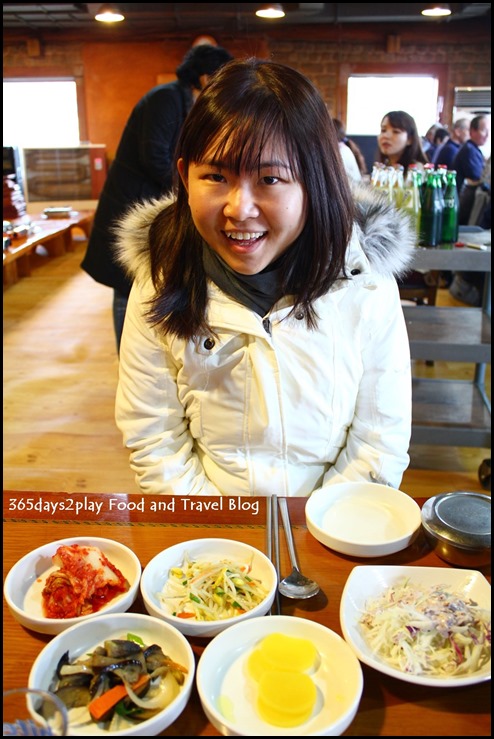 Me looking really happy. I’ll be frank, the lunch stop was also a highlight for me! I really enjoyed the wonderful lunch in a traditional Korean restaurant in the middle of god knows where. 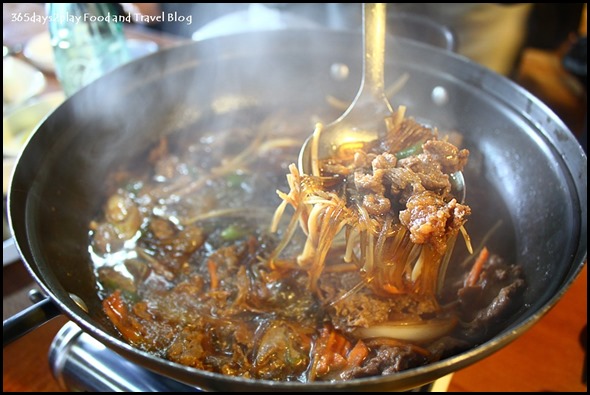 Check out the beef bulgogi! It tasted fantastic. And after freezing our noses off at the Freedom Bridge, this hot pot really helped to warm us up. The heated floor boards helped too. 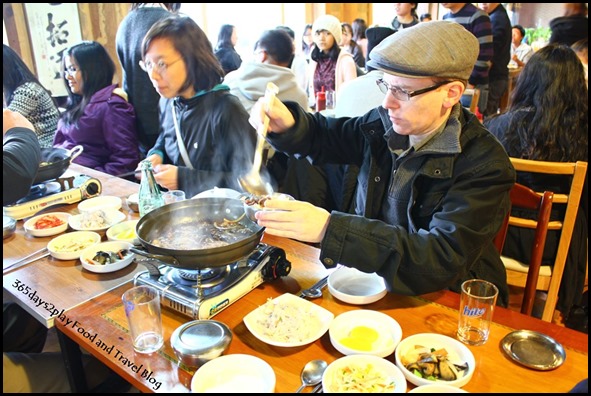 The couple next to us were Americans and they were a little apprehensive in getting started with their beef bulgogi. They kept looking at us because I think they were thinking that it’s 4 pax to 1 pot! For us, we had no problems at all knowing what to do because we had the same thing 2 nights ago, only this one was nicer! The great thing with Korean cuisine is that they will always serve you an assortment of side dishes aka Banchans, so in a way, you don’t have to worry about there being only 1 main course to choose, because you can still rely on the side dishes. 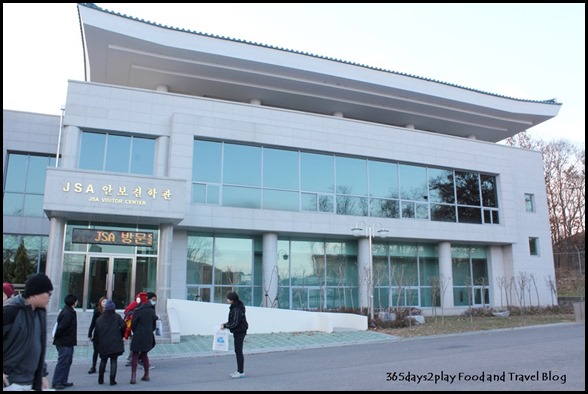 After lunch, we finally entered the 4km wide Demilitarized Zone (DMZ) and had a briefing at the JSA Visitor Centre. The DMZ runs across the Korean Peninsula from left to right on the 37th Parallel. But the JSA or Joint Security Area is the only area where you can cross into North Korean soil.

We were given the low down on what we could or could not do at the JSA. It was serious business, especially when we had to sign a declaration form stating that we are aware we are stepping into hostile area where enemy actions cannot be predicted. 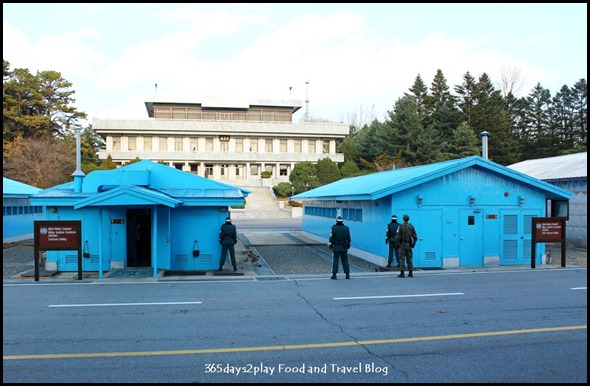 This is the Joint Security Area (JSA) aka Panmunjeom, where all the ”action” happens these days. The grey building on the other side is the North Korean Freedom House. You can see the South Korean ROK soldiers standing in a weird way. Apparently it is so that they expose less of themselves to the North Koreans so as to minimise being shot. And should they need to signal to their comrades, they can do so using the half of body that is blocked from view.

I spied a North Korean observing us with binoculars from the grey building. 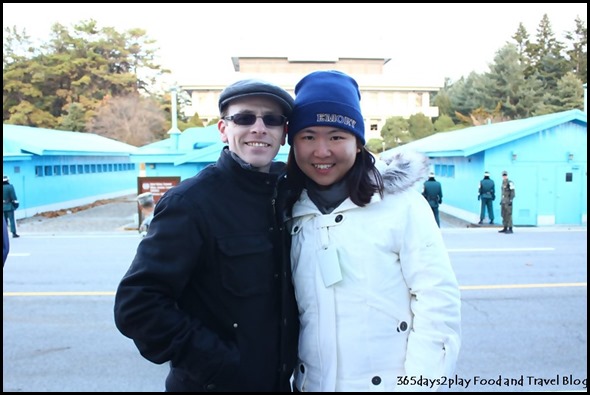 I was a bit apprehensive taking my eyes off the North Korean side. What if I got shot from behind? You may think it’s a laughing matter but it really isn’t. We have to adhere to a strict dress code such as having to wear covered shoes so that in the even we are required to run and take cover, we can do so. 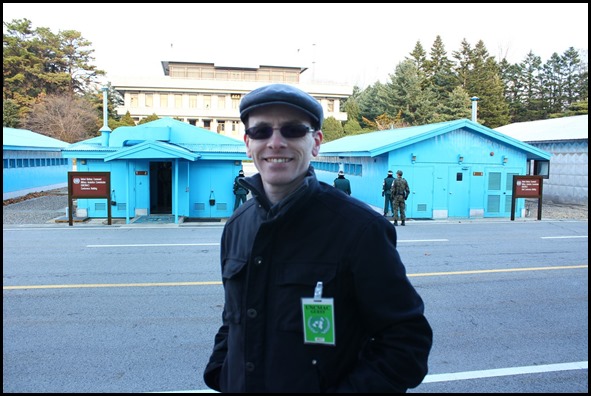 Big smile. The Partner told me visiting the JSA was better than going shopping in Myeong Dong. 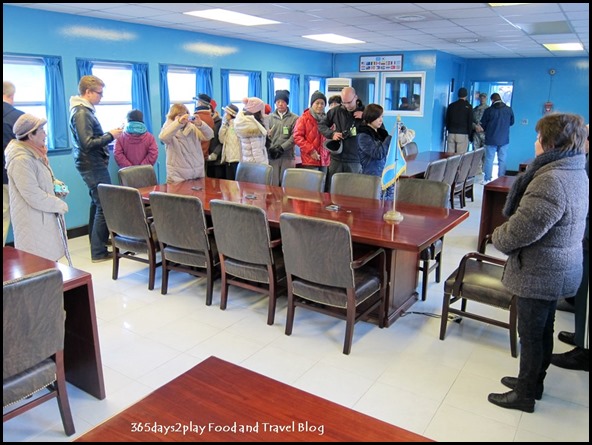 Finally on North Korean soil! The microphones on the table marks the line between North Korea and South Korea. How surreal is that? We were given about 2 minutes to take pictures and get the hell out. 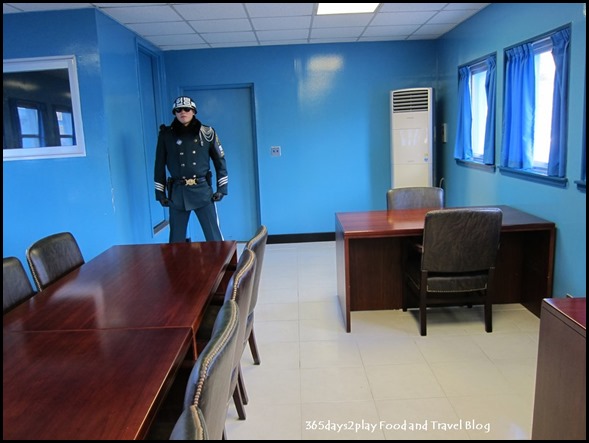 The room is guarded by 2 ROK soldiers. It used to be that North Korea would send their soldiers too, but they stopped doing so after a while. The ROK soldiers all have to have a black belts in in some form of martial art to be posted here, and they are required to wear sunglasses so as to minimise eye contact with the North Koreans. 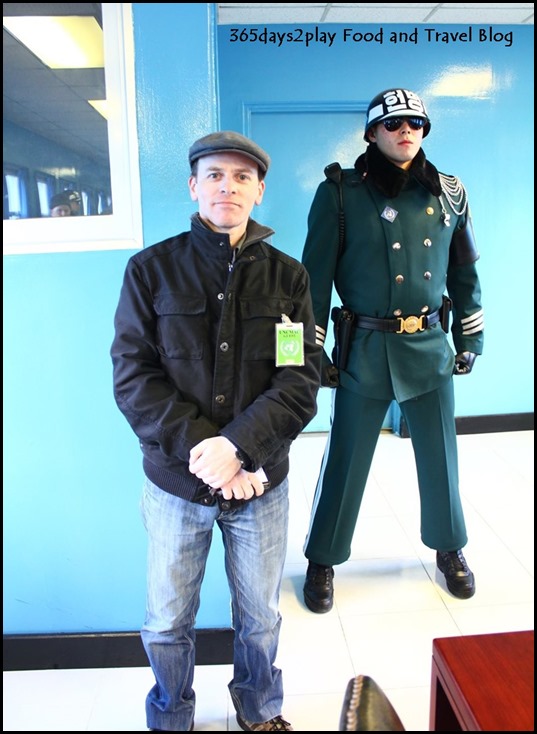 Quite handsome I must say…

The ROK soldiers are there to ensure that stupid tourists don’t open the door onto the North Korean side, which has happened before. 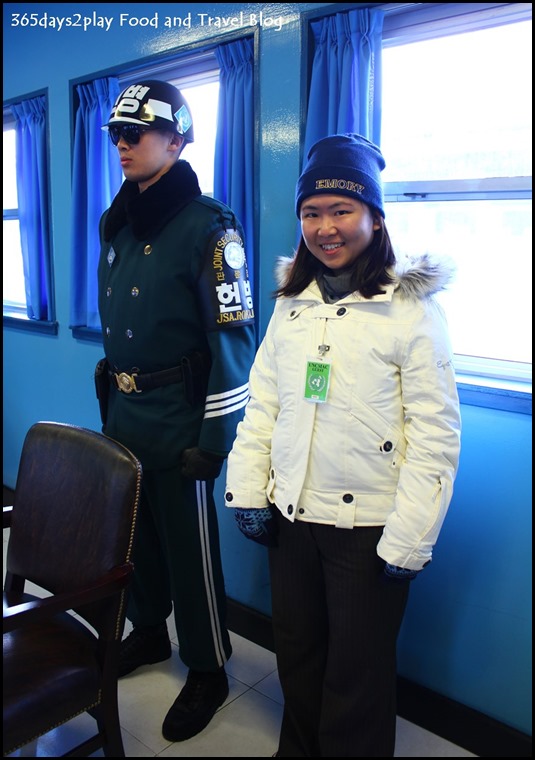 And that’s it folks! 8 hour journey in total for a priceless 2 minutes in North Korea. SGD$88. It was well worth the money though. Not many places in the world these days to experience something as surreal as this.

And it’s a thought provoking trip here as well, even though I am not Korean in any way. It just makes one wonder how it must be like, to have relatives living on the other side but never being able to meet them. And what about those soldiers after the Korean War, who made the choice to remain in or return to North Korea, do they regret their decision? Do they even know what it is like outside North Korea? And what’s with the Propaganda village? Who are they kidding with that? It’s interesting to note that North Korea’s literacy rate is one of the highest in the world, at 99%!!

Afternoon tea at The Shilla