What a mouthful! Chanced upon this restaurant about half a year back and was quite surprised to see a restaurant all decked out in the German/Black Forest theme that I hadn’t heard of prior to seeing it! Finally managed to check it out only yesterday.

I love German food, not just the sausages and the pork knuckles, but also other things like sauerkraut and spí¤tzle. I could eat bowls and bowls of sauerkraut, if only it were more commonly found in Singapore! 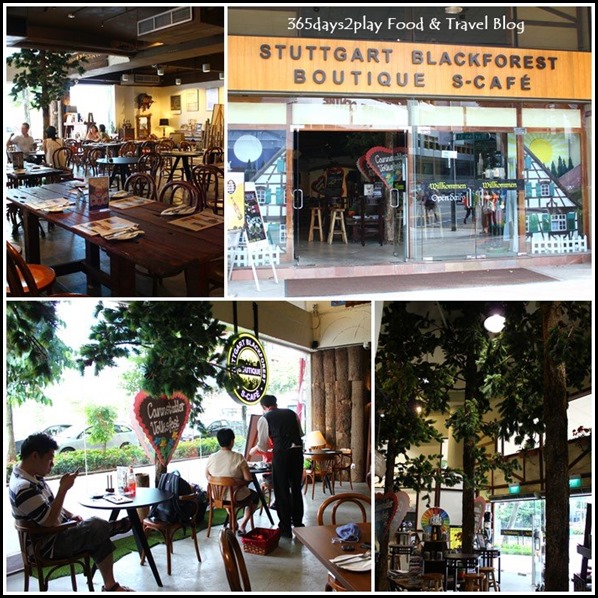 The place is decked out with lots of wood, and they even have a number of evergreen pine trees to make you feel as if you really are in some part of the Black Forest. Actually I think this Stuttgart Blackforest Boutique S-Cafe is more gimmick than good food although I must admit I too was attracted to enter by this interesting looking place.

Granted, the beers are quite reasonably priced, at $15 for half litre, and $18 for 1 litre, but the food menu is painfully limited. If you’ve been to Werner’s Oven in the East or Brotzeit, the menu at Stuttgart is like 1/10th of what would normally be available. 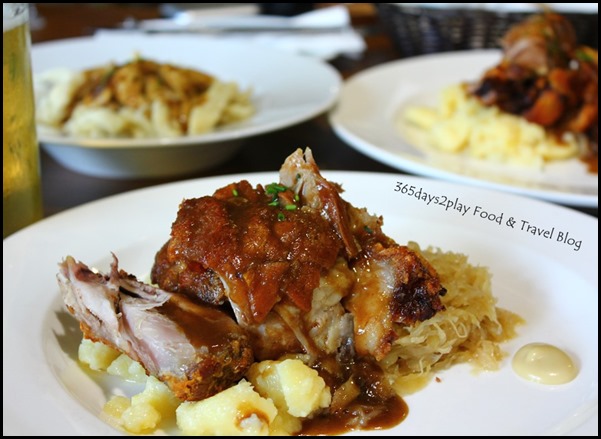 There’s just a few mains to choose from, so the Partner and I both ended up choosing the single portion pork knuckle. We were surprised to find that the entire dish was room temperature! Surely not??? We told the manager about it and he seemed shocked to find that the food was not hot. He brought the dishes back to have them reheated, but they were only warm when served again. 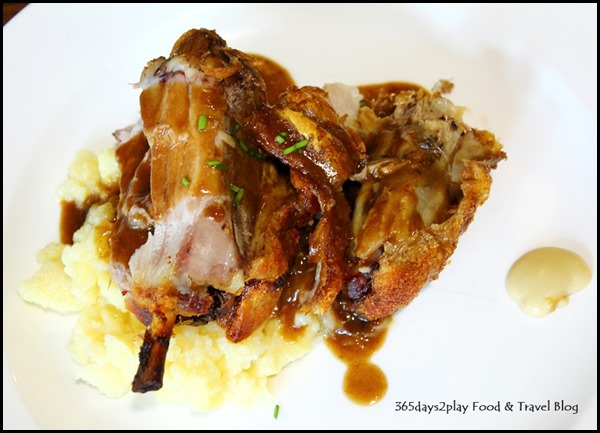 Taste wise, the pork knuckle was alright. Mine was quite tender because I happen to have pieces nearer the bone, skin was also pretty crispy. Potato salad was nothing to shout about. Loved the sauerkraut, but then again, I’ve always loved sauerkraut, and it’s hard to get that wrong. 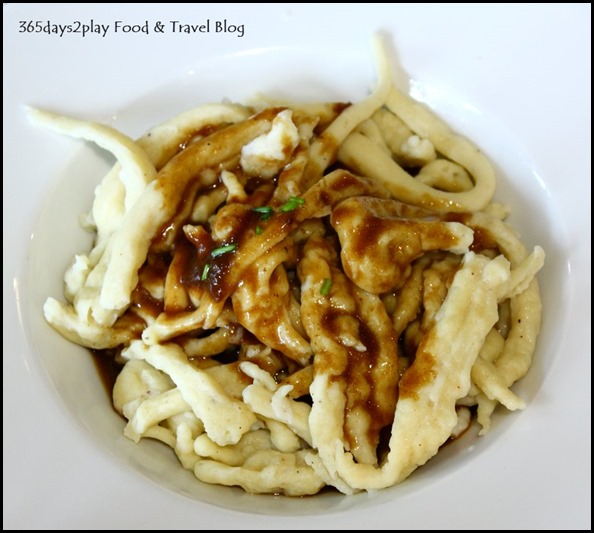 I really didn’t need to order this spí¤tzle but because I had originally wanted pasta for dinner, I thought I’d just order it since it was only $5. Big mistake. Well, it just tastes as plain as it looks. I’ve eaten enjoyable spí¤tzle before. It’s like Germany’s version of pasta, a bit rougher in looks and texture, but it is palatable if done well. I’ve even eaten it in Germany before and at Werner’s Oven. This version here is, forgettable to say the least. It says on the menu that this is ideal for kids. Poor kids. 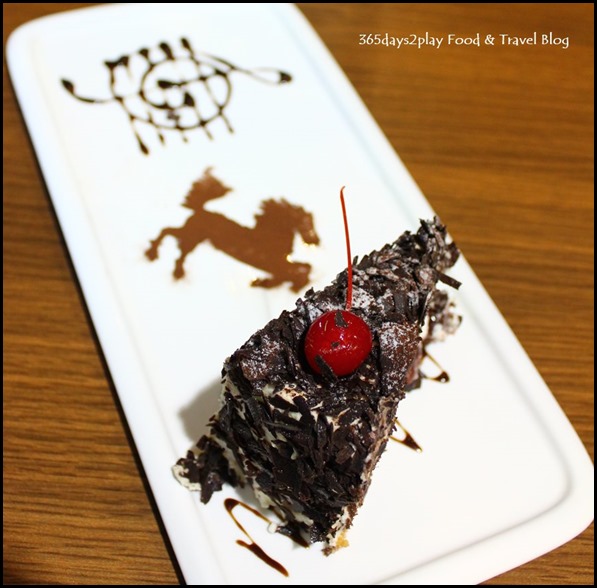 This Black Forest cake came highly recommended, well the menu states it is the best Black Forest cake in Singapore. How to leave without trying right? For $10 I was expecting the slice to be slightly bigger, but I guess the cost went into the generous amount of kirsch in the cake. This Black Forest cake is not a cake for kids, as it is really loaded with the cherry liquour. The alcoholic cherries are mainly at the bottom layer, so if you can’t take alcohol, you can eat the top layer, although if you ask me, I’d say just eat it and don’t be a wimp! 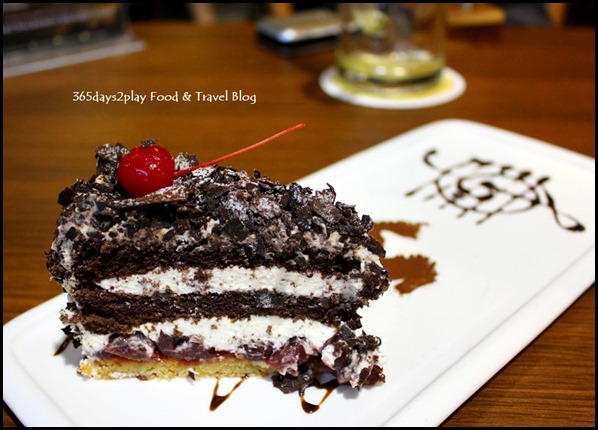 The Black Forest cake was pretty good, as any cake with this much alcohol ought to be. It’s not the best I have eaten though, as the chocolaty bits were not as chocolaty as I would have preferred. But on the whole, I wouldn’t mind eating this cake again. Pay $2 when you order this cake and get an additional coffee to go along. 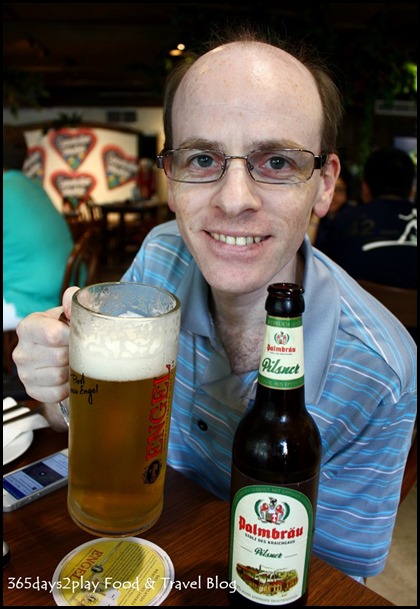 The Partner certainly had no complaints about the Pilsner he ordered. $15 for 500ml. Pay $3 more and you can get another 500 ml! It says for happy hour only, but I read somewhere else in their website that it is all day. You go check it out. From the looks of it, I think the Partner has already made plans with his beer guzzling kakis to return again for the beer. 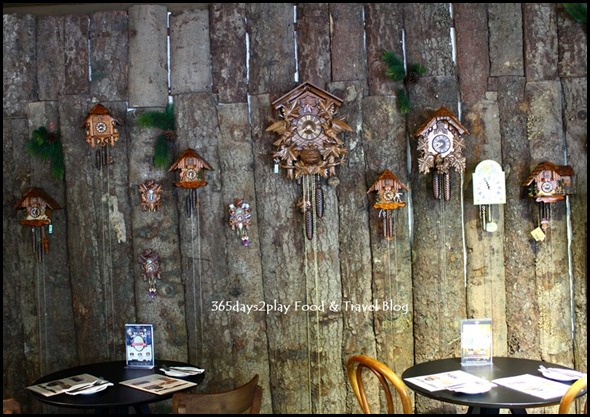 Apparently cuckoo clocks were first invented in Germany, as a result of a contest. And I always thought they were a Swiss invention. 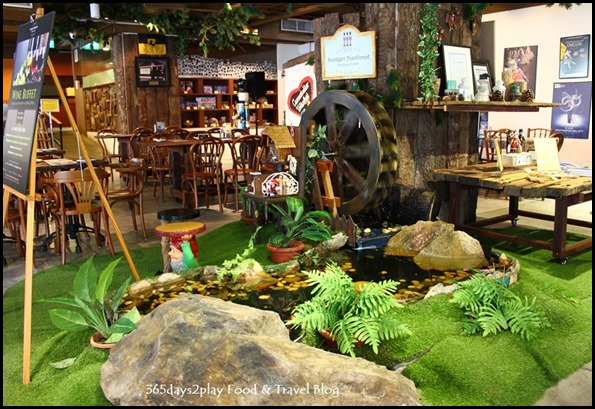 You can have a bit of fun checking out all German stuff here. It strikes you as gimmicky, but it has put the travel bug in me again to want to return to Germany to see the real thing. I have no idea as to who the owners are for this restaurant, it does not seem to say on their website. Certainly owners who have a great fondness of all things German that they have collaborations with Goethe Institut and the Stuttgart Ballett. Even the Lord Mayor of Stuttgart graced the opening of this restaurant!

The Coffee Bean and Tea Leaf – New Food and Drinks!