Did you know, coffee is the second most popular drink in the world after tea? Yet it is often shrouded in myths and urban legends regarding its potency and effects on health. I have read some reports about the coffee benefits but these were always sponsored by coffee associations so I took them with a pinch of salt even though I secretly hoped the reports to be true.

So I thought, what the heck, I’d do some of my own research and compile a list of figures and findings out there. You will be surprised that coffee actually possesses some interesting health benefits. I guess this is more reason to go cafe hopping to check out all the new cafes that have been sprouting around Singapore? 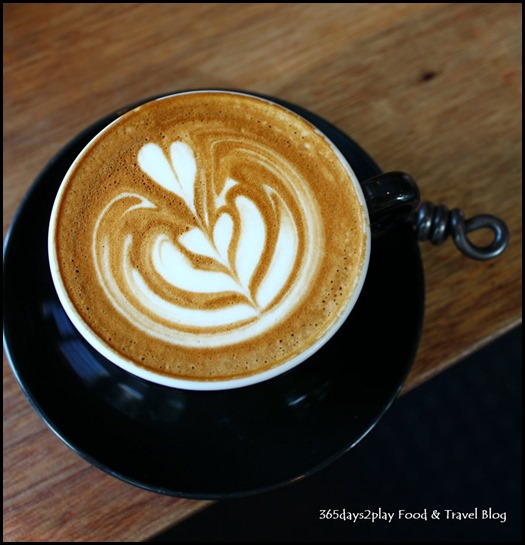 The FAT side of coffee

But first, let me shock you with some glaring facts that we may have missed when indulging in that cuppa from Starbucks. Most people prefer to drink coffee as a latte or cappuccino without considering the full facts of what they are consuming. While a typical latte from a third wave cafe may contain about 135 calories, a Venti Starbucks latte can contain up to 240 calories and 9gms of fat and this is before drinkers have added sugar. To compare, a McDonald’s Cheeseburger is 340 calories and 12gms of fat! Most people wouldn’t have two cheeseburgers every day but many are happy to have morning and afternoon lattes. Why is it we don’t see lattes as fattening? Just because it is a liquid? Anyway, size does matter so do support your neighbourhood cafe rather than places that ply you with mega sized drinks.

Antioxidants
Most of us today struggle to have a healthy diet despite being aware of the benefits of antioxidants. Surprisingly for many people coffee provides their biggest source of antioxidants! WTF?? One Norwegian study showed that coffee contributed more antioxidants to people’s diet than fruits, tea, wine, cereals and vegetables. As the benefit comes from the bean itself and not from caffeine, decaf works as well as regular coffee. Most shocking of all, while fruits and vegetables also have tons of antioxidants, the human body seems to absorb the most from coffee. For this reason alone I’m already making plans to meet friends over a cuppa this weekend! Of course this doesn’t mean you should give up you 5-7 daily helpings of fruit and veges, as they also provide other stuff such as fibre.

Improve Energy Levels and Happiness
Ok this we sort of already know, whether actually felt or simply psychological. We all know that coffee contains a large dose of caffeine which causes alertness in more people. This feeling of heightened awareness is actually beneficial. Many controlled trials in humans show that coffee improves various aspects of brain function. This includes memory, mood, vigilance, energy levels, reaction times and general cognitive function. Studies have shown coffee drinkers are more happy and amazingly a study done by the Harvard School of Public Health determined that drinking between two and four cups of coffee can reduce the risk of suicide in men and women by about 50 percent. The proposed reason is because coffee acts as a mild antidepressant by aiding in the production of neurotransmitters like serotonin, dopamine and noradrenaline. Next time you break up with your girlfriend or boyfriend, head to the cafe instead of the bar!

Healthier Brain
Several studies have indicated coffee drinkers have lower rates of Alzheimer’s disease. In fact a recent study discovered that participants who drank three to five cups of coffee per day had about a 65% decreased chance of developing Alzheimer’s disease or dementia later on in life.

Pain Reduction
If you suffer from pain at work you are not alone and you may want to consider reaching for coffee to ease your pain. Norwegian researchers observed 48 people performing office work and found that those who consumed coffee only declared a pain-intensity level of 41, whereas participants who didn’t drink any coffee reported having a score of 55. Coffee of course does not fix the number one pain for most people though, the boss!

Liver Protection
Coffee drinkers have lower rates of alcohol related liver disease. A 2006 study of 125,000 people over 22 years showed that those who drink at least one cup of coffee a day were 20 percent less to develop liver cirrhosis. While another study showed people who drink 4 or more cups per day have up to an 80% lower risk.

Note that some of these studies are unable to confirm if the benefits are causal or not but at least the main body of evidence points to coffee being perfectly fine in moderation like more other foods.

Caffeine Content of Coffee vs Tea vs Soft Drinks

I have always known coffee to have much more caffeine than tea. But in recent times, a friend keeps insisting that tea contains more caffeine. Well this table below certainly busts the myths, although if you choose the stronger teas with more caffeine content, they can get close to that of coffee.

Are you the type of person who can’t drink coffee after a certain hour? Unfortunately, it seems that coffee has no effect on me, and I could have a cuppa at 11pm at night without any problems falling asleep. I’m not a coffee addict btw, I only drink coffee mainly on the weekends. Oh hey, if you don’t want the caffeine buzz from Coca Cola, try Root Beer instead. Surprising though. Root Beer is my favourite soft drink, and it always leaves me smiling. 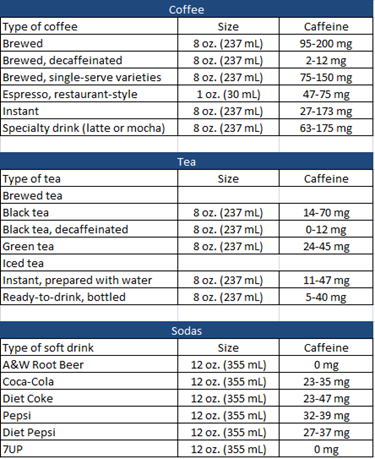 **The large variance for tea and coffee is due to different varieties and processing involved. Coffee from Robusta beans has nearly double the caffeine as Arabica. Robusta beans are commonly used for your typically local coffee (aka kopi) while Arabica is used by the large coffee chains, third wave cafes and the beans/coffee grinds sold in supermarkets.
http://www.mayoclinic.org/healthy-living/nutrition-and-healthy-eating/in-depth/caffeine/art-20049372

So, the conclusion is, we can more or less rest easy that our cafe hopping exploits aren’t ruining our health, at least from the beverage point of view. Can’t help you if you’re downing tons of cakes and waffles though. You’re on your on for that!

Cafes in the Eastern part of Singapore