I had a quick walk around Suntec City after dinner at BreadSociety. Have you been to the basement of Suntec City? It’s totally revamped!!! I must say it looks pretty cool now, and the space is better utilised. The mega Fountain of Wealth is still there but the main difference now is that there are cafes and eateries lining around the Fountain of Wealth, in addition to the original circle of restaurants! So double the number now, with many cafes to choose from! Don’t worry, you won’t get wet from the fountain because the original glass walls are still there.

Most of the cafes and restaurants will be familiar to you (which is a little disappointing because I would have liked to see more new names). The familiar favourites and previous restaurants that are still there include Paradise Inn, Crystal Jade, Ichiban Boshi and Muthu Curry.  Food Republic is now the new food court and sports a very open concept as compared to the previous food court which I thought was a very linear and enclosed thing. Cafes wise you have CoffeeBean Beanstro, Gelare, etc. Pack’d from the Les Amis group is new, and so is BreadTalk Cafe and All Things N’Ice, both by BreadTalk. Together with Food Republic that is also owned by BreadTalk, BreadSociety and ToastBox, it looks like the BreadTalk Group has practically taken up half of the F&B space at Suntec! With their recent grand opening of the BreadTalk Headquarters, they really are going places!

Anyway, enough of talking, and just enjoy the pictures.Oh did I mention that Carrefour is no longer, and Giant is now the supermarket of choice? 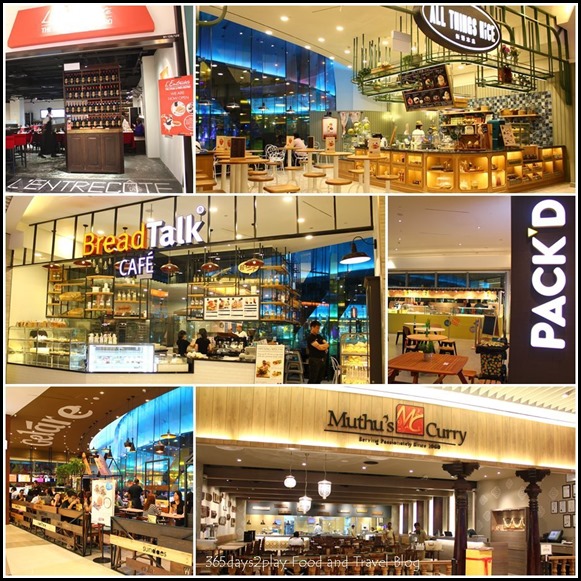 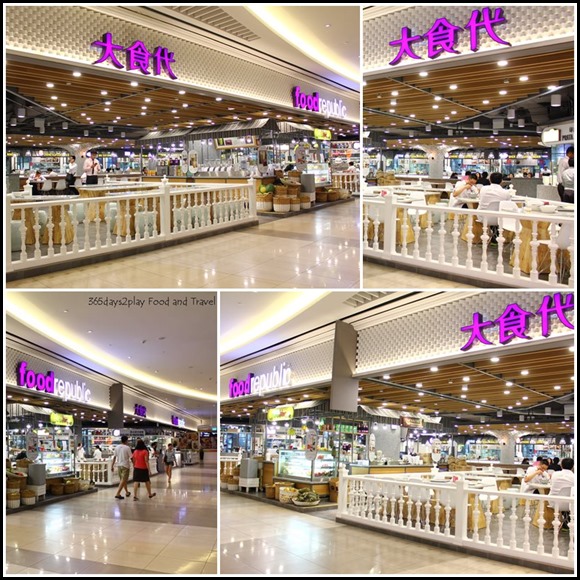 Food Republic. You won’t find a dessert stall at this Food Republic, because there is All Things N’Ice opposite. 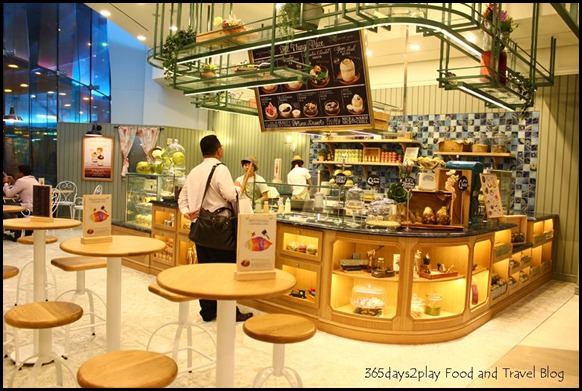 All Things N’Ice is an Asian inspired dessert cafe by the BreadTalk Group. Not cheap, I have to say, think double or triple the price as compared to what you would get at a traditional food court. But then again, I guess you are paying extra for the ambience and slight exclusivity. This is located directly opposite the Food Republic so you won’t miss it. Looks a bit like a toy store, for some reason. 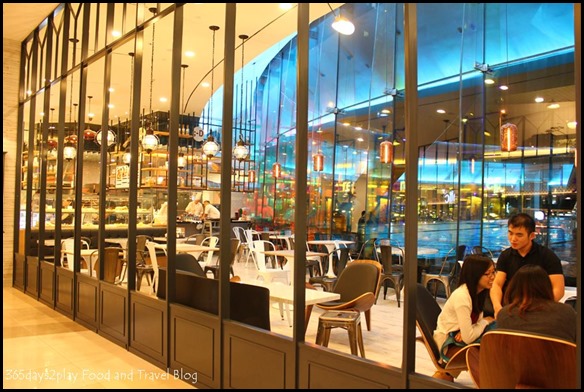 Bread Talk Cafe is right next to All Things N’Ice. To be frank, I’m a little confused as to what BreadTalk Cafe serves as compared to BreadSociety. I think BreadTalk Cafe has more local stuff, more sandwiches and the pricing is slightly lower. 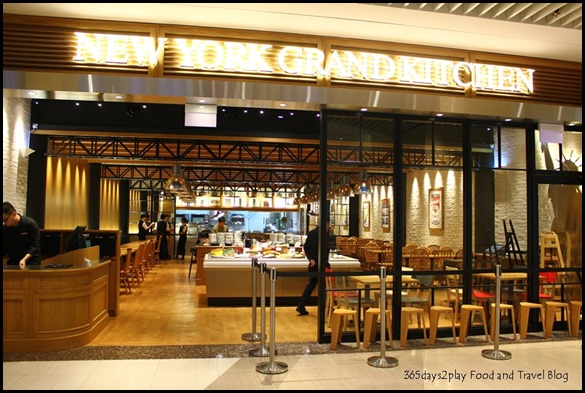 Brought to you by the owners of Hifumi at Marina Square and Chizo Zanmai, Create Restaurant Holding’s latest New York Grand Kitchen features a rotisserie-centric American-style menu. In addition, there is an all-you-can-eat deli bar. 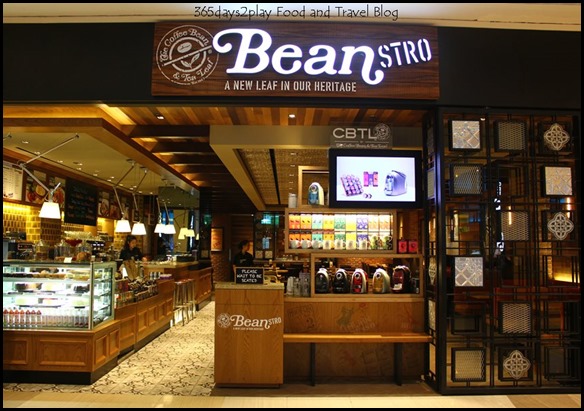 CoffeeBean’s Beanstro, guess this needs no introduction. Isn’t it interesting to note that some things never change? Despite the expanded menu, my heartfelt favourite from CoffeeBean and Tea Leaf is still the Mocha Ice Blended that has been available since the first day they opened in Singapore more than 10 years back. 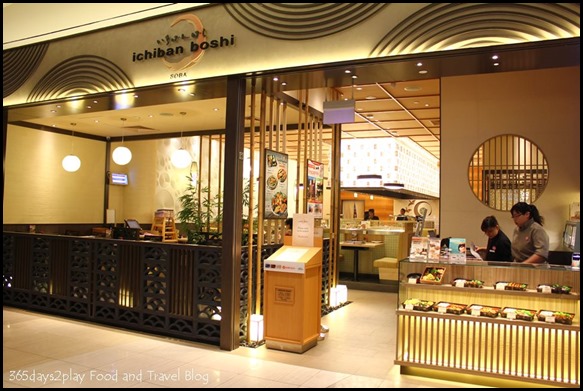 Ichiban Boshi, one of my favourite Japanese restaurants for their affordable Bento sets. Glad to know they will still maintain a presence at Suntec City. My personal favourite is the Business Wazen set. The financial analyst in me has calculated that this is the MOST value for money set in the entire Ichiban Boshi menu, and no matter how many times I flip the menu whenever I am there, 99% of the time I still end up ordering the Business Wazen set! I still remember that back in my younger days, like more than 10 years ago, this used to be called the Business Bento set. Prices have hardly changed! I still costs about $15.90 or $16.90 for several slices of sashimi, a small piece of grilled saba/mackerel, several pieces of tempura prawns and vegetables, chawan mushi, miso soup and 2 slices of watermelon. Beat that! 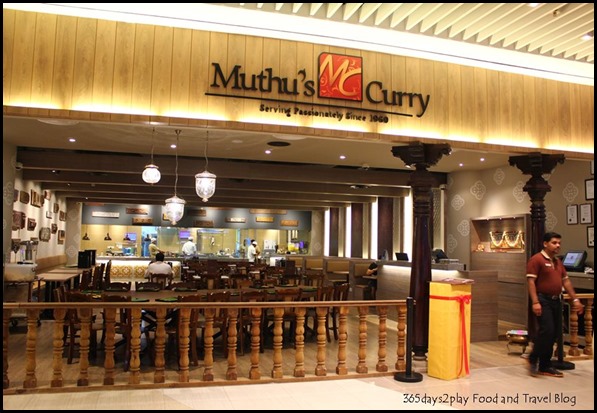 I have never tried Muthu’s Curry in all these years, and I always feel this restaurant seems to stick out as compared to the other restaurants. Maybe previously it was because Muthu’s Curry was a ”recent addition” but now, they’ve changed status to becoming the incumbents. 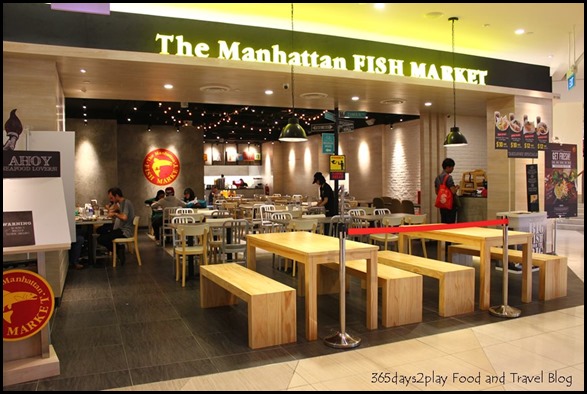 The Manhattan Fish Market. Last tried it at The Dining Edition at Marina Square. 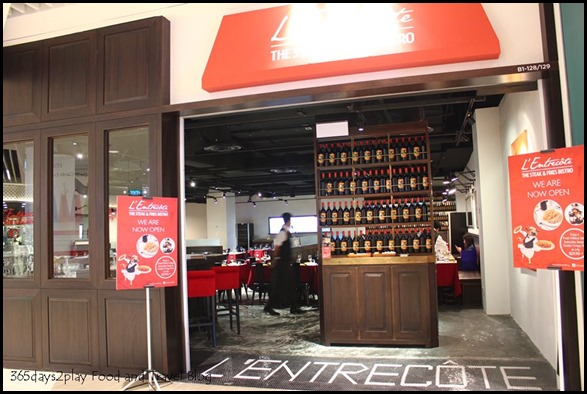 L’Entrecote Steak and Frites Bistro. This is definitely one of the new kids on the block at Suntec City. When they first opened at Duxton Hill, they would be packed to the gills thanks to the lovely steak that they serve, and unlimited servings of the fries, also known as steak frites in French. The steak is so good, that is the only dish that they serve! At least that’s the case at Duxton Hill. Not too sure if it’s the same case here at Suntec. I tried L’Entrecote back in 2011 when it first opened. Looks like it’s time for another sampling. Alas, no website to check it out too. 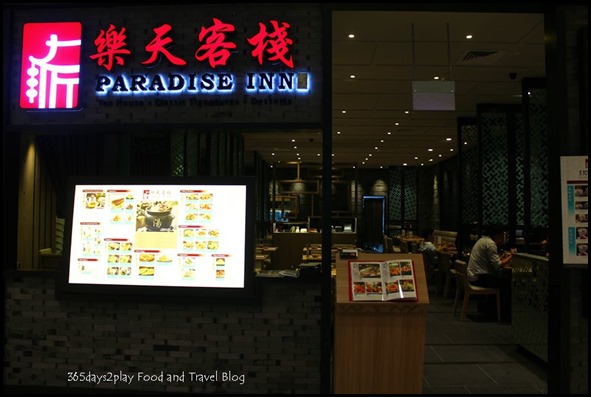 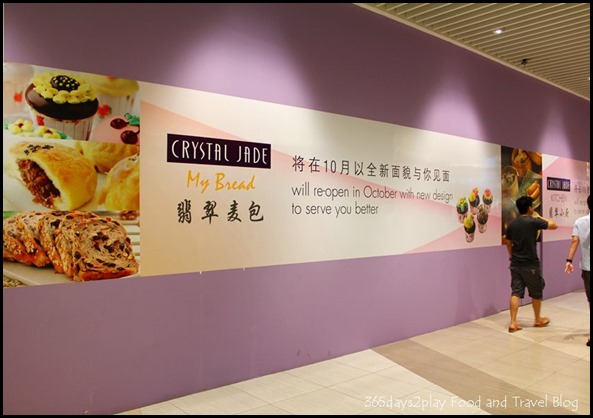 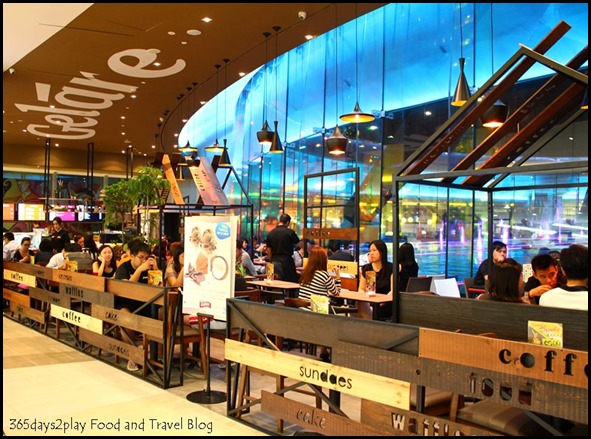 Gelare Cafe. Gelare cafe used to be on the 2nd level of Suntec City, along the link bridge area I believe, but now they have moved to the basement. A much better location for them right in front of the Fountain of Wealth. You might have noticed that of all the photos, Gelare looks the most packed at 9.30pm. This is because it’s Waffle Tuesday! Yes, they have half price waffles on Waffle Tuesday! 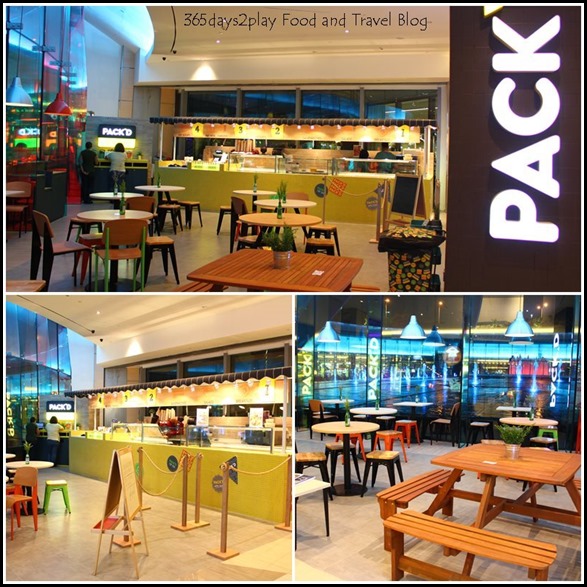 Pack’d is the Les Amis Group’s latest addition to the family, this time a casual sandwich bar. Did you read in the Straits Times that Les Amis’ fine dining restaurant Au Jardin will be closing down? I shall miss the romantic and tranquil Au Jardin, sited in a historic colonial building. 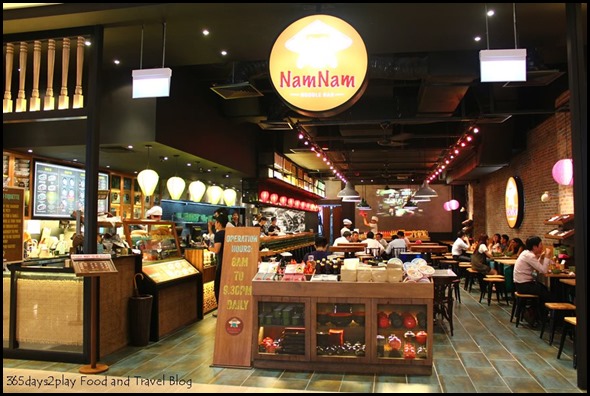 Nam Nam noodle bar is also opened by the Les Amis Group. I tried Nam Nam once at its first outlet at Raffles City Shopping Centre basement, back when it first opened. Perhaps I don’t really fancy Vietnamese food for the plain flavours, but I just didn’t see what the fuss and long queues were about. But if you’re crazy over Nam Nam, well you may just want to try this branch as it’s pretty empty! 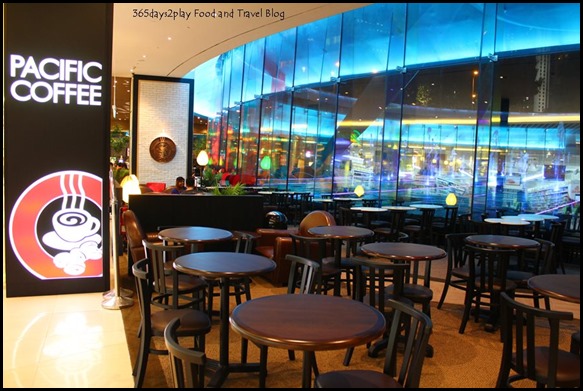 Pacific Coffee. Ok at least it’s not Starbucks. I do wish we could have some 3rd Wave Cafe types setting up at Suntec City, but I guess that will never be because the coffee chains will always outbid the independent 3rd Wave coffee types. Now you know why you always find interesting cafes in far flung locations, it’s mainly because of the rent! 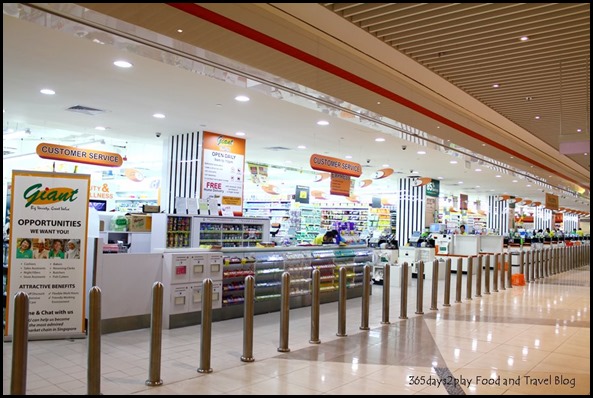 And last but not least, GIANT flanking nearly 1/3 of the basement Fountain of Wealth area. You won’t miss it. 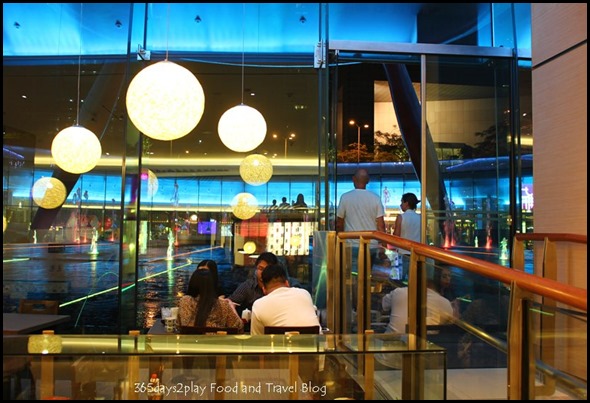