I’ve had Sushi Tei countless and countless of times in the last few years. Most of the time, it would be at City Hall because that’s the most convenient location for me. I think Sushi Tei really gives good Japanese food for your money. Even though I have never been to Japan so I can’t say for sure what Japanese authentic food tastes like, I can say for sure that compared to other exorbitantly priced Japanese restaurants, Sushi Tei really gives them a run for the money. When I eat at the expensive Japanese restaurants, I can’t really tell the difference in quality and freshness. To be sure, the expensive Japanese restaurants probably are better, but only slightly so, so do you really want to pay 3 times more elsewhere?

The thing about expensive Japanese restaurants is that I obviously expect more. Naturally so wouldn’t you agree. Yet the dishes appear to be almost the same, and worse still, the portions seem smaller. So, rather than disappoint myself, I almost always gravitate to Sushi Tei for my sushi needs.

Anyway, although I always eat at the Sushi Tei City Hall outlet, my colleagues frequent other outlets. It seems that the quality differs from outlet to outlet. Apparently, the Sushi Tei City Hall outlet seems to have the best quality sushi, and slightly bigger portions too. I had previously wondered if this could be true. I mean, Sushi Tei must obviously have some form of quality control going on. It wouldn’t want to have differing standards for its restaurants. That would not be good for the image.

Today, I finally had the chance to visit another Sushi Tei outlet. I had dinner at Sushi Tei Tampines One. I ordered a Salmon Avocado handroll as well as a spicy clam pasta soup. The partner ordered the crispy seafood on rice. I’ve ordered the same exact Salmon Avocado handroll many times at Cityhall, and I must say the handroll at Tampines one looks a tad smaller. Taste-wise, it was the same thankfully.

The soup of the spicy clam pasta soup was tasty. However, for some reason, the pasta did not absorb the flavour of the soup. The texture of the pasta was nice and al dente, but it was also rather bland. Perhaps Sushi Tei deciding to use a spaghetti type pasta was the wrong way to go. The pasta is the vehicle for the sauce. In this case, the ”sauce” is liquid soup. So perhaps they ought to have used clam-shell pasta, which would have carried the soup better. Or perhaps that is why the italian sauces are usually thick?

On the whole, I think I have to remember not to have ramen or pasta dishes at Sushi Tei. When I eat Ramen, I want the broth to be extremely rich and flavourful. I know some people prefer milder versions, but not me. Give me the full 24 hour simmering of pork bones thing extra strong if possible.

On the whole, I think that the Tampines branch is still good, just that if you want the best experience, try City Hall instead. But don’t come during lunch time coz I’ll be there and I don’t want YOU hogging the tables! Hehehe! 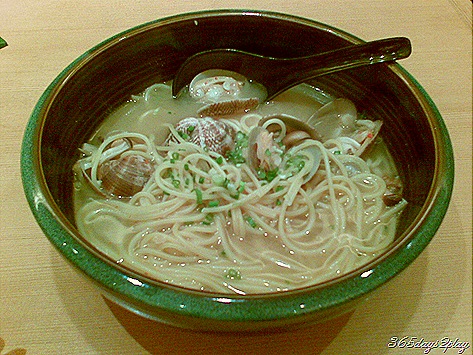