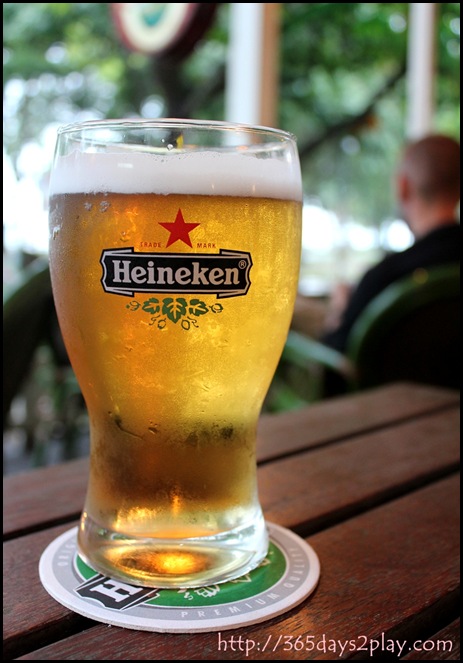 This shot was taken at Scruffy Murphys at East Coast Park. It’s one of the few places where you can enjoy a beer al fresco next to the beach while watching the skaters and cyclists go by. Another nice place would be at Sunset Cafe, but they only open at night if you’re going on a weekday.

I never used to like beer when I was younger. The strange thing is, I seemed to have developed a taste for beer in recent years. I still can’t finish one on my own, but it’s pretty enjoyable sharing one with the Partner. It’s very difficult to find New Zealand beer in Singapore. For many years, it was simply not available in Singapore. Then a while back, the brand Tui was sold in Carrefour. Don’t know if they still do. The really strange part is that the 7-11 near where we live sells DB Export. But the one that we like best, Steinlager, isn’t available here, which is really dumb because Steinlager is New Zealand’s biggest export beer.

If anyone spots any NZ beers being sold in sunny Singapore, please give a holler!

6 Unique and Memorable Things to do in Auckland